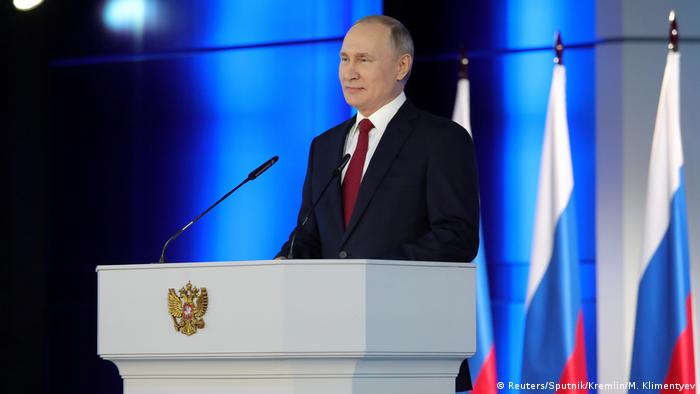 Russian President Vladimir Putin proposed changing the constitution to give parliament more power, adding that a referendum should be held to approve the changes.

"I consider it necessary to conduct a vote by the country's citizens on an entire package of proposed amendments to the country's constitution," Putin said in an annual address to lawmakers on Wednesday. He did not specify a timeline or date for the referendum.

The news came hours before Russian Prime Minister Dmitry Medvedev announced that he and the rest of the Russian government were resigning, according to reports by Russian news agencies.

The constitutional amendments proposed by Putin would give parliament the power to pick Russia's prime minister and cabinet ministers. That power currently lies with the president.

Valentina Matvienko, the speaker of Russia's Federation Council, the upper house of parliament, told Russian state television station Rossia 24 that the "president has shared his powers." She explained that the proposed changes would "significantly increase" the role of both houses of parliament and would make the working of parliament more "transparent."

Political changes ahead of term end

Putin added that he did not want to change Russia's strong presidential system. He also said he wanted to tighten the criteria for candidates who want to run for president.

Analysts were watching Putin's speech closely for indications about possible changes to Russia's political system ahead of 2024, when Putin's term ends. The constitution currently limits presidents to two terms, requiring him to step down in 2024.

"I wouldn't exclude that Putin sees himself taking on the speaker's chair in the parliament in the future," political analyst Abbas Gallyamov told DW, explaining that the Russian president gave a lot of detail on how the proposed reforms would change the work of the Duma, the lower house of parliament, which he proposed would appoint the cabinet.

"Since Putin's main task now is to secure his own political future, we can assume he is paving the way for himself there," he added. Gallyamov is a former speechwriter for Putin.

"Putin is sounding out the terrain, in order to stay in power forever," Nechayev told DW.

Other observers have also speculated that Putin may try to stay in power by shifting into the prime minister's seat, among other moves.

Pozhalov also sees Putin taking on a leading role in the Duma or in the State Council, which is made up of regional governors.

Putin has been at the helm in Russia for over 20 years — longer than any other Russian or Soviet leader since Josef Stalin.

"This is about the future," he said.

He proposed giving more subsidies for low-income families with children up to 7 years old. Support was previously capped off at for children under 3 years old.

Russia's population is currently estimated to be 147 million, with the fertility rate expected to go down to 1.7 births per woman by 2024.

Emily Sherwin in Moscow contributed to this report.