Russian blogger sentenced to 5 years in prison for a tweet | Europe | News and current affairs from around the continent | DW | 03.09.2019

A Moscow court has sentenced Vladislav Sinitsa to prison for a tweet promoting "extremism" and "violence." The blogger is one several Russians jailed in the wake of mass anti-government protests. 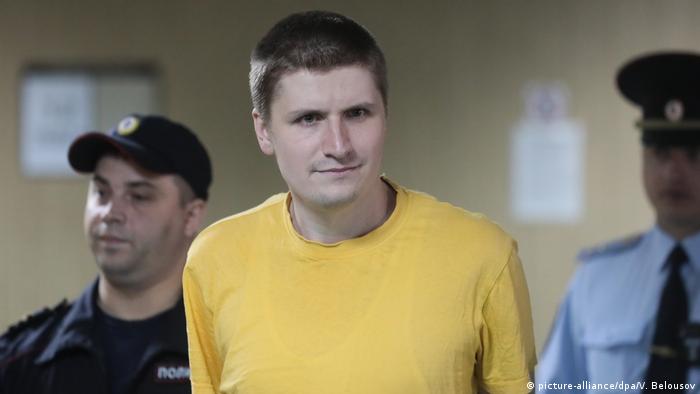 A district court in Moscow on Tuesday convicted Vladislav Sinitsa of "extremism in connection with the threat of violence." The ruling was handed down after authorities determined his tweet, authored in the wake of recent violent crackdowns on opposition protests in the Russian capital, amounted to a threat against security forces and their families. Sinitsa admitted to writing the message but denied during court proceedings that his tweet amounted to a concrete threat.

In the posting, Sinitsa wrote: "They could look at their happy family photos, study the geolocations and then the child of a brave law enforcement officer simply doesn't come home from school. Instead of a child, the mail brings a CD with a snuff video."

Alexey Navalny, the most prominent member of Russia's fractured opposition, described Sinitsa's missive as "stupid" in a twitter post of his own. However, he argued no one would have seen the tweet had the government not chosen to prosecute Sinitsa, and said there was no law against stupidity in Russia.

Sinitsa's wasn't the only conviction Tuesday in connection to recent protests. Several multi-year prison terms were handed out to demonstrators on charges that they attacked police officers, while others were placed under house arrest.

The convictions are the latest twist in the fight over Moscow's upcoming city parliament elections on September 8. Under normal circumstances the elections would hardly draw national attention. But the vote has become the focal point of what opposition leaders view as a fight for fair representation, after city election officials barred dozens of opposition candidates from running. Representatives for the election commission maintain the applications were rejected after irregularities were discovered, including hundreds of allegedly forged signatures collected by opposition members in support of their candidacy.

The weeks that followed the election commission's decision saw wave after wave of protesters take to the streets as part of unsanctioned demonstrations calling for "free and fair elections." Security officials were quick to clamp down on the dissent, making thousands of arrests which drew international criticism.

Moscow's heavy-handed attempts to stifle popular dissent expose a rift within the government, according to Abbas Gallyamov, a Russian political consultant. "Obviously, there is a struggle between two sides," he said. "The 'hawks' want to arrest everyone and 'doves' brandish opinion polls, proving that most citizens do not approve of repression, and shout: 'You are crazy! We have elections in a week! Can you imagine how voters will vote if you are arresting everyone?'"

A recent poll conducted by the independent Levada Center found that a majority of Russians rejected the claim that the protests stemmed from "Western meddling," an accusation frequently leveled by government spokespeople. Instead, 41% of respondents said they felt the protests were fueled by dissatisfaction with the state of the country or the state of Russian politics (38%). Meanwhile, popular support for United Russia, the country's ruling party, has fallen to historic lows.

A lack of clear public support may be behind the decision to either drop or reduce charges against some of the demonstrators arrested in recent weeks. "We see that the investigation is changing criminal charges to administrative ones, but this is unlikely to somehow affect the voting process or mood," Aleksey Kurtov, president of the Russian Association of Political Consultants, told DW. "Active opposition members are still confident in the complete innocence of the accused. There is so much resentment against the security forces that any concessions will no longer be perceived as a gesture of goodwill. Rather, it will be [seen as] a triumph."

Regardless of the outcome of Sunday's vote, that resentment is likely to galvanize the opposition's resolve as it looks towards Russia's parliamentary election in two years' time.

As tens of thousands rallied on the streets of Moscow, Russia's rulers reacted with violence and fear. Their worries are warranted, writes Miodrag Soric. (11.08.2019)