As tens of thousands rallied on the streets of Moscow, Russia's rulers reacted with violence and fear. Their worries are warranted, writes Miodrag Soric. 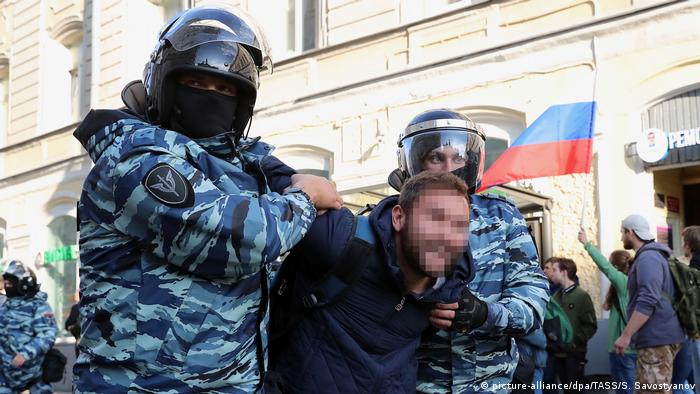 These protesters will not be scared away — not by threats, not by police batons, and not by arrests.

Tens of thousands took part in the protests in Moscow to demand free and fair local elections, freedom for political prisoners and the resignation of President Putin. It was the biggest demonstration in years — and it took place in the middle of the summer holiday season, when many Russians would rather be enjoying their time off in their dachas. Russia's civil society is standing up to the Kremlin.

The protests were ostensibly over a relatively unimportant city council vote. In reality, there is great dissatisfaction with the country's entire leadership. Recent opinion surveys have confirmed that confidence in the head of state is at a historic low. The economy is stagnant, prices are rising, corruption has reached alarming levels, and millions are upset over recent pension reforms. A growing number of Russians are dissatisfied, but the government is refusing to provide them a political alternative, not even at the local level.

The protesters' boldness has unsettled those in power, and the country's rulers are reacting helplessly. Again and again the president and prime minister promise improvements like more money and higher wages. In reality, Russians' standard of living has been falling for five years. Everyone knows it. They can feel it in their wallets.

Ultimately this is about more than just material things. Many ordinary Russians feel the government doesn't represent or understand them. The manner in which the protests took place made this clear. The demonstrations were forced to take place on a street ringed by office buildings and security forces — far away from government buildings, far away from the pulsating life of the city center. Because of this, after the officially authorized protest ended, some protesters marched toward the presidential administration building in the city center. There, they encountered hundreds of security personnel, and many demonstrators were arrested.

Among the protesters were many liberal-minded youths calling for more freedom and western-style democracy, but there were also older Muscovites. They were carrying communist flags and mourning for the Soviet era, when, in their view, the state took care of its people. Old communists and young democrats — united by their certainty that this government is not taking them seriously anymore.

The longer President Putin remains in power, the greater the distance between the governing and the governed will become. The Kremlin will use more police power, tighten its control of the press and persecute dissenters more than ever to stay in power.

Every evening DW sends out a selection of the day's hard news and quality feature journalism. You can sign up to receive it directly here.