Russia has blocked a US-drafted resolution to renew a mandate of the body investigating the use of chemical weapons in Syria. A rival, Russian-made motion was also blocked, leaving the future of the probe in question. 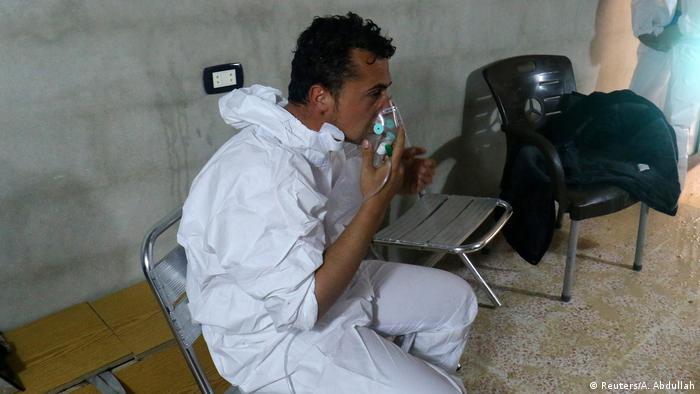 The US and Russia clashed in the UN Security Council on Thursday, with the latest contentious vote marking the 10th time Moscow has used its veto power to block a motion on Syria since the civil war began in 2011.

Russia rejected a US-drafted motion to extend the mandate of the Joint Investigative Mechanism (JIM), the international inquiry focusing on the use of chemical weapons in Syria. China, also a veto power, abstained from the vote. The move comes just hours before the previous mandate is set to expire.

Commenting on the US' initiative, Russia's UN ambassador Vassily Nebenzia said the proposal was not balanced and would help entrench "the inherent flaws of the JIM," which was established with Russian backing in 2015.

"We need a robust, professional mechanism that will help to prevent the proliferation of the threat of chemical terrorism in the region and you need a puppet-like structure to manipulate public opinion," Nebenzia said.

Read more: Russia accuses US of providing cover for the 'Islamic State' militia

A similar initiative to prolong the JIM mandate was also blocked by Russia last month, with Moscow saying it wanted to wait for the release of a UN report on a chemical attack which killed around 100 people in the town of Khan Sheikhoun. The report, which was released last week, blamed the Syrian regime for the massacre. However, Russia dismissed the findings as "mythical or invented" and criticized the task force's research methodology.

Nebenzia restated the criticism on Thursday, saying that the Khan Sheikhoun inquiry suffered from "fundamental flaws."

In turn, the US representative Nikki Haley said that Russia undermined the world's ability to deter chemical attacks.

"Russia has killed the investigative mechanism which has overwhelming support of this council," she said.

"The message to anyone listening is clear: in effect, Russia accepts the use of chemical weapons in Syria."

Japan asks for a stop-gap measure

Russia initially put forward a rival motion, insisting that the Security Council consider it after voting on the resolution proposed by the US.  However, the rules of the council dictated that the Russian resolution be considered first, prompting Moscow to eventually withdraw the document.

In the draft, Russia insisted that the existing findings on Khan Sheikhoun be put aside to allow for another "full-scale and high-quality investigation" into the attack.

After the US motion was blocked, Bolivia resubmitted the Russian draft for a vote. Russia and China backed the draft, but seven countries, including veto-wielding powers the US, France, and the UK, voted against it.

The JIM is set to cease operations as its mandate expires on midnight Thursday New York time, or 5:00 Friday GMT. Following the impasse, Japan reportedly asked the UN Security Council to renew the investigation for another 30 days. The measure would allow more time to find a compromise, the AFP news agency reported.

The panel created unanimously by the Security Council is due to end in mid-November. Russia has drawn criticism for the move, but says it must first review an upcoming report before allowing the probe to move forward. (24.10.2017)