Russia has dismissed a UN inquiry report blaming the Syrian government for a deadly chemical attack. Moscow's move raises serious questions over whether the UN mandate for the investigative task force will be renewed. 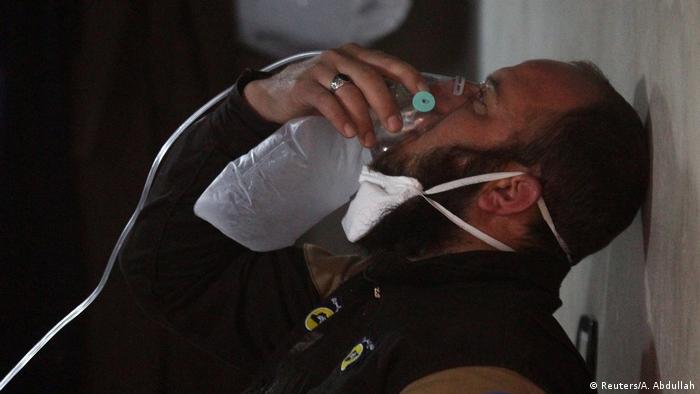 Russia on Tuesday clashed with western powers over the findings of a joint-inquiry report published by UN and the Organization for the Prohibition of Chemical Weapons (OPCW) into April's deadly toxic gas attack in the Syrian town of Khan Sheikhoun.

The report found what was widely believed: that the Syrian government had perpetrated the attack, firing the banned nerve agent sarin on the opposition-held town, killing around 100 people.

Russia's UN delegation, however, dismissed the findings as "mythical or invented" and criticized the task force's research methodology.

Moscow's refusal to recognize the findings raises serious doubts over whether the investigative task force's mandate will be extended before it expires next week. Last month, Russia, Syria's most important ally, vetoed an initial US bid to renew the mandate for the UN/OPCW expert body, known as the Joint Investigative Mechanism (JIM). The Russian delegation said it instead wanted to wait until the release of the report before making a decision.

Since then, Russia has also offered its own draft resolution, which, according to Russia's deputy UN Ambassador Vladimir Safronkov, would remedy "errors and systemic problems" associated with the investigation. "Without a comprehensive change it will become a tool to settle accounts with the Syrian authorities," Safronkov on Tuesday told the 15-member UN Security Council.

For a new resolution to pass, it needs to garner at least nine votes from the 15-member security council, and no vetoes from the five permanent members — the United Kingdom, China, France, Russia and US.

Nikki Haley, the US ambassador to the United Nations, stressed that there was no greater priority for the Security Council than to extend the JIM mandate, adding that "anyone who prevents us from achieving this goal is aiding and abetting those who have been using chemical weapons."

Deputy British UN Ambassador Jonathan Allen, meanwhile, told the Security Council that "Russia is trying to shoot the messenger to cover up for the crimes of the Syrian regime."

Russia's alternative draft resolution, Allen later told reporters "has very little if any support in the council and no realistic prospects of success."

"I understand the political issues surrounding the situation in the Syrian Arab Republic - however, this is not a political issue but an issue about the lives of innocent victims," Mulet said.

The JIM found nothing to prove the incident had been staged by the opposition to frame the Syrian government, Mulet said, "and when I say nothing, I mean nothing."