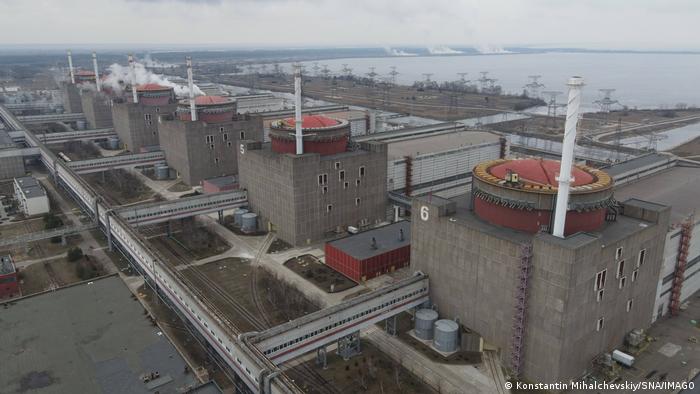 No injuries were reported and radiation levels remained normal, according to a company statement

The nuclear power facility is the largest of its kind in Europe, with six reactors. Any damage could pose a serious health and environmental hazard.

"Only the complete withdrawal of Russians from the territory of the Zaporizhzhia NPP and the restoration of Ukraine's full control over the situation around the plant will guarantee the restoration of nuclear safety for all of Europe," he said during his Thursday evening address.

Russian-installed local officials instead claimed Ukrainian forces had shelled the plant for the second time in one day, disrupting the shift changeover of power plant workers.

The Zaporizhzhia plant area was also hit by shelling last weekend, with each side trading blame.

The facility in Southern Ukraine on the Dnieper river has been under Russian control since the beginning of March. It is still run by its Ukrainian technicians.

Ukrainian Foreign Minister Dmytro Kuleba called for the International Atomic Energy Agency (IAEA) to send a mission to the plant to assess the safety situation as soon as possible.

IAEA chief Rafael Grossi said there is currently "no immediate threat" to the safety of the plant due to military actions, but "this could change at any moment."

UN Secretary-General Antonio Guterres demanded an immediate end to military activity near the plant, warning that it could "lead to disaster." 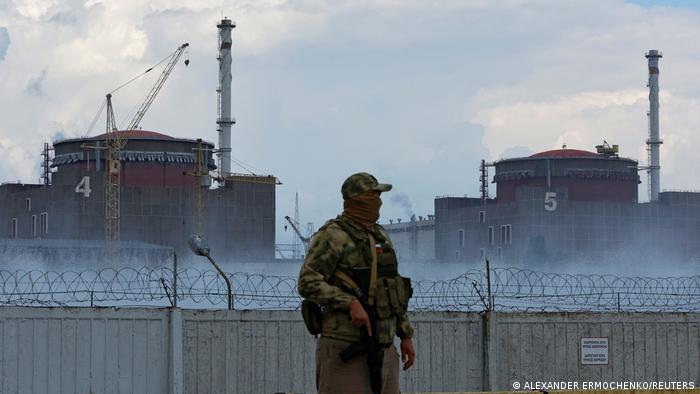 A Russian soldier stands guard outside the Zaporizhzhia plant

Here are the other main headlines from the war in Ukraine on August 12.

Eight Russian fighter jets were damaged or destroyed, according to reports.

While the damaged jets are only a fraction of the overall aviation fleet, Britain said Black Sea capability would be affected, since Saky is used as a primary operational base. 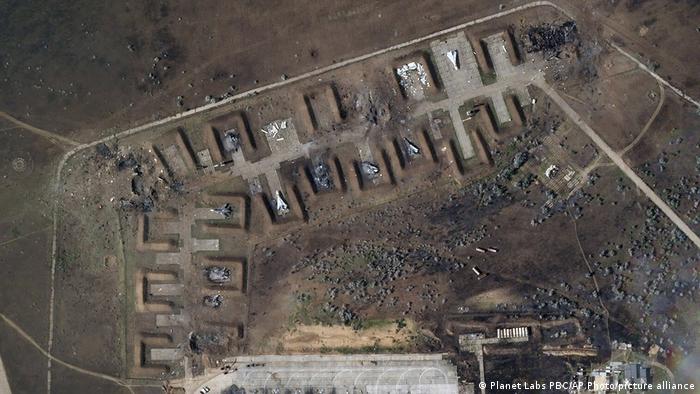 The explosions, which Russia has said killed one and injured five, will prompt its military to revise the threat perception in the region, the ministry added.

Ukraine did not claim responsibility for the incident, while Russia claimed it was caused by an ammunition depot explosion.

Crimea was seized in 2014 by Russian special forces in the aftermath of a comparatively pro-Russian elected government being overthrown in a popular uprising in Kyiv.

The Belize-flagged Sormovsky left Chornomorsk port on Friday, carrying 3,050 tonnes of wheat to northwestern Turkey. The Marshall Island-flagged Star Laura also departed from the port of Pivdennyi, bound for Iran with 60,000 tonnes of corn aboard, the ministry added.

The latest departures bring the total number of ships that have left Ukraine to 14. The previous cargoes under the deal have carried grain for animal feed or for fuel.

The two warring parties signed a deal two weeks ago to allow a resumption of some 20 million tons of grain exports from Ukraine that were stalled for five months due to a blockade by Russian forces.

The agreement, brokered by the UN along with Turkey, should help to ease fears that the loss of Ukrainian grain would lead to severe food shortages and even famine in parts of the world.

Estonia to deny entry to Russians who hold Schengen visas

Reinsalu added that Estonia would submit a proposal on the matter to the EU, following support from Finland and Latvia.

A spokesperson for the European Commission, the EU's executive arm, said a tourist visa ban is not possible under existing law.

German Chancellor Olaf Scholz said he did not support the calls to restrict entry to Russians, arguing that it would weaken sanctions against Moscow "if it was directed against everyone, including innocent people."

Russia will not let Switzerland represent Ukrainian interests in Russia

Ivan Nechayev, a spokesperson for Russia's Ministry of Foreign Affairs, said Switzerland cannot represent Ukraine in Russia since Bern opted to join the EU in imposing sanctions on Moscow, rendering the country no longer neutral in Russia's eyes.

Switzerland "cannot act either as a mediator or as a representative of interests," Nechayev told reporters.

He confirmed the Swiss had formally requested that its embassy be permitted to represent the interests of Ukraine in Russia and Russian interests in Ukraine.

Ukraine seeks to evacuate eastern region of Donetsk before winter

Ukraine aims to evacuate two-thirds of residents from areas it controls in the eastern battleground region of Donetsk before winter, partly out of concern people won't be able to stay warm living with war-damaged infrastructure, deputy Prime Minister Iryna Vereshchuk said on Thursday.

Late last month, Ukraine announced the mandatory evacuation of people from Donetsk to save civilian lives. Although the authorities describe the evacuation as "mandatory," residents can opt out by filling in a form declaring their intention to stay. 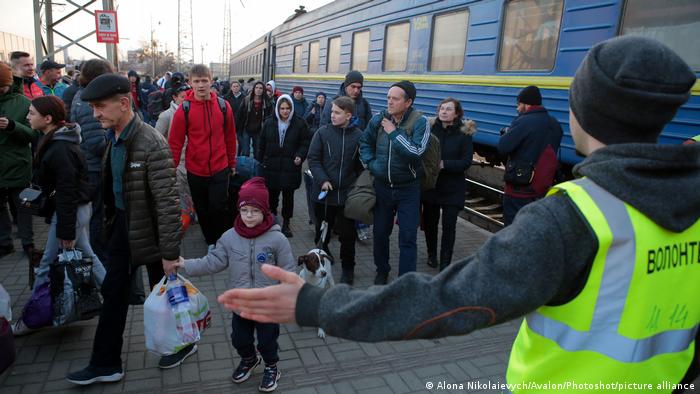 Millions of Ukrainians have fled Russia's invasion since the war began

Ukrainian authorities reported 120 missiles hit near the city of Nikopol and heavy shelling in Donetsk on Thursday as Russia's offensive continues. Valentyn Resnichenko, the governor of Dnipropetrovsk, said three were killed and seven were wounded.

"The enemy is concentrating its efforts on establishing full control over the territories of the Luhansk and Donetsk regions," Ukraine's General Staff reported, citing more than 60 military and civilian targets.

Luhansk regional governor Serhiy Haidai said the region had seen an increase in the presence of Russian mercenary forces, including from the notorious Wagner firm.

Lithuania's state rail company announced the suspension of the transit of certain Russian goods like iron and steel products, timber, fertilizers and the coolant ethylene glycol through Lithuanian territory to the Russian exclave of Kaliningrad.

Kaliningrad, which is cut off from the rest of Russia, borders Poland and Lithuania and is heavily militarized.

In the middle of June, Lithuania imposed EU sanctions on Russia and restricted freight traffic on all but essential items not covered by Brussels' sanctions. The decision sparked a furious response from Moscow.

In mid-July, the European Commission contradicted Vilnius and said there was no general ban on the transport of Russian goods to Kaliningrad by rail and only transferring sanctioned military equipment was prohibited. Lithuania then allowed Russian cargo traffic by rail to restart.

Ukrainian counteroffensive advances one village at a time

Denmark and the UK announced more financial and military aid for Ukraine as part of an international donor conference that raised €1.5 billion ($1.55 billion) in the Danish capital Copenhagen on Thursday.

Denmark, the UK and Ukraine hosted the conference.

Danish Prime Minister Mette Fredricksen said her country would kick in an additional €110 million ($113.6 million) in financial assistance for Kyiv.

Fredricksen said, "This is a war on the values that Europe and the free world are built upon."

German Chancellor Olaf Scholz places Russia's war against Ukraine at the top of a list of myriad challenges facing him and the country.

A reserve lieutenant colonel in the German army, the Bundeswehr, has gone on trial for passing sensitive information to members of Russia's foreign intelligence service, the GRU. A sensitive document on German-Russian relations following Russia's 2014 annexation of Crimea is among the secrets the man is alleged to have passed to Russian handlers.

DW visited Ukrainian refugees in Dortmund who teamed up with the BVB football club to hold a photo exhibition demonstrating the horrors of war.