Global leaders have reacted with dismay after fighting between Russian and Ukrainian forces caused a fire at the Zaporizhzhia nuclear power plant. The incident sparked fears of a potential nuclear disaster.

Russian troops seized control of the Zaporizhzhia nuclear power plant early Friday after a building at the site caught fire during heavy fighting with Ukrainian forces.

The incident at Europe's largest nuclear power plant raised alarm from global leaders of a potential massive disaster before Ukraine's state emergency service announced the blaze had been put out.

"The territory of the Zaporizhzhia nuclear power plant is occupied by the armed forces of the Russian Federation," the Ukrainian nuclear inspectorate said. "The fire was extinguished by the Ukrainian State Emergency Service units. Information on the dead and injured is absent."

The statement added that no radiation leak had been detected and staff were continuing to work at the site.

Zelenskyy calls on Russians to protest to avoid another Chernobyl

"Russian people, I want to appeal to you: how is this possible? After all we fought together in 1986 against the Chernobyl catastrophe," he said in a televised address, evoking memories of the nuclear disaster.

Russia's defense ministry blamed the attack at the site of the power plant on Ukrainian saboteurs, calling it a monstrous provocation. 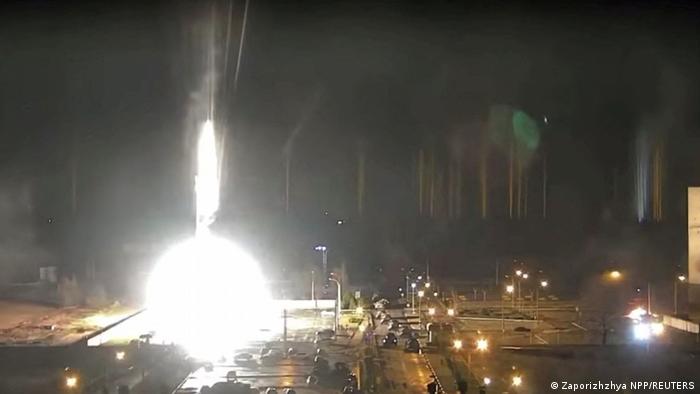 Ukrainian authorities said Russian troops had shelled the Zaporizhzhia nuclear power plant, causing a fire to break out in the building's training complex.

Video footage showed one building ablaze amid a rain of incoming shells, before a large candescent ball lit up the sky, sending smoke billowing across the site.

After hours of uncertainty, the site was later secured, with US officials saying the compound's reactors were being "safely shut down."

Later, the regional military administration said in a statement that the fire at the plant in southeastern Ukraine had been put out, while reporting damage to the compartment of one reactor, though it does not affect the overall safety of the power unit.

How did global leaders react?

A mayor from a town near the Zaporizhzhia nuclear power plant was the first to break the news shortly after 1:30 a.m. local time (2330 GMT).

"As a result of continuous enemy shelling of buildings and units of the largest nuclear power plant in Europe, the Zaporizhzhia nuclear power plant is on fire," Enerhodar Mayor Dmytro Orlov said on his Telegram channel, citing what he called a threat to world security.

Ukrainian President Volodymyr Zelenskyy urged Europe to "wake up" as he reminded continental leaders of the 1986 Chernobyl nuclear disaster, considered the worst of its kind both in cost and casualties.

"I am addressing all Ukrainians, all Europeans and everyone who knows the word Chernobyl," Zelenskyy said in the wake of the fire. "Tens of thousands had to be evacuated and Russia wants to repeat that, and is already repeating it, but six times bigger."

The Chernobyl nuclear site was captured by Russian forces last week, with the Ukrainian Foreign Ministry warning at the time of the possibility of "another ecological disaster."

Zelenskyy said Ukraine has 15 nuclear reactors and "if there is an explosion it is the end for everyone. Do not let Europe die in the nuclear catastrophe."

Zelenskyy: 'Only urgent action by Europe can stop the Russian troops'

Shortly after the fire broke out, US President Joe Biden urged Russia to "cease its military activities in the area and allow firefighters and emergency responders to access the site," the White House said in a statement.

The office of British Prime Minister Boris Johnson said he will seek an emergency UN Security Council meeting following the fire at Zaporizhzhia.

"The Prime Minister said the reckless actions of [Russian President Vladimir] Putin could now directly threaten the safety of all of Europe," Downing Street said in a statement. The UK will "do everything it could to ensure the situation did not deteriorate further."

Canadian Prime Minister Justin Trudeau said he also spoke with Zelenskyy about the onslaught. "These unacceptable attacks by Russia must cease immediately," he said on Twitter.

NATO chief Jens Stoltenberg on Friday decried Russia's "recklessness" over the shelling of the nuclear power plant and demanded Moscow stop the war against its neighbor.

Stoltenberg: 'We condemn the attacks on civilians'

What we know about Zaporizhzhia

The Zaporizhzhia plant is located in the south of Ukraine on the Dnieper River, around 525 kilometers (326 miles) south of Chernobyl.

The site has a total capacity of around 6,000 megawatts, enough energy supply for around 4 million homes.

The plant produces roughly one-fifth of Ukraine's electricity and almost half the energy generated by all of the country's nuclear power facilities.

Construction on the first reactor began in 1979. The facility now has six Soviet-designed VVER-1000 reactors, the last of which was started up in 1995.

Opinion: The cyberwar over Ukraine is like nothing we've seen before

Hacktivists around the world have got involved in the Ukraine war. This is uncharted territory — and there is no telling what will happen next, writes DW's Janosch Delcker.

Russia's invasion of Ukraine in 7 graphics

From rocket attacks to refugees, these graphics help understand the current military situation and the history of the conflict between Russia and Ukraine.