War in Ukraine: Will it bring Sweden and Finland closer to joining NATO? | Europe | News and current affairs from around the continent | DW | 03.03.2022

War in Ukraine: Will it bring Sweden and Finland closer to joining NATO?

Sweden and Finland have stayed out of NATO due to their military nonalignment policy. That's been supported in the past by majorities of both Finns and Swedes. But the war in Ukraine has changed that. 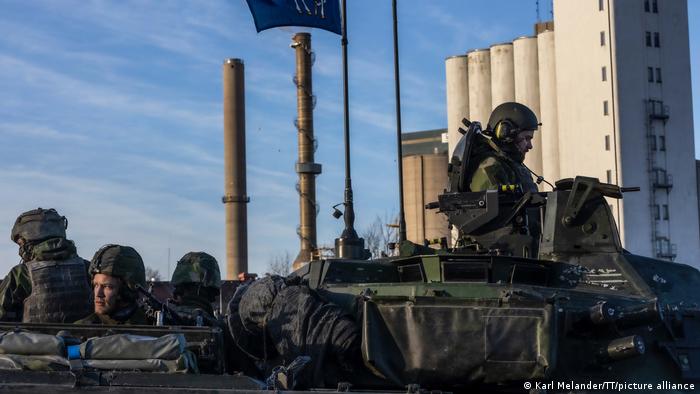 Skepticism over the value of joining NATO is waning fast in both Sweden and Finland as a result of Russian President Vladimir Putin's unprovoked invasion of Ukraine.

A recent opinion poll taken in Sweden shows that public perception has shifted dramatically: 41% said they were in favor of NATO membership; 35% were against, while 24% said they are unsure. For the first time, more of those polled were in favor of membership than against. A new poll commissioned by Sweden's biggest-selling newspaper Aftonbladet, shows that a majority of Swedes now want to join NATO.

That shift in opinion is even more dramatic in Finland. For the first time in its history, a majority of Finns are in favor of joining the alliance.

"To give you some context, in recent times, only about 24 to 28% have been in favor. So now that we have a 53% majority in just a matter of weeks is stunning," Henri Vanhanen, a Finnish foreign policy analyst and adviser to the opposition National Coalition Party, told DW.

While the change in public opinion is astonishing — given that for years there's been virtually no movement — domestic politics, especially in Sweden, could still stop the government from seeking membership, says Anna Wieslander, chair of the Institute for Security and Development Policy in Stockholm.

"You have a pretty polarized situation among the parties. You would have the right-wing leaning parties who are pro-NATO, then Red-Green who are against joining; and then you have the right-wing extremist party, the Swedish Democrats, the third-biggest party who are also against," said Wieslander, who is also director for northern Europe at the Atlantic Council and secretary-general of the Swedish Defense Association.

In order to find a parliamentary majority, there would need to be "a quick shift, and it's not always that easy to shift a political party," she explained.

Sweden has a longer tradition of neutrality than Finland, having last fought a war in 1814. It’s that historical legacy, notably the wars with Russia in the 18th and 19th centuries, that left an indelible mark on its position. Meanwhile, the concept of neutrality has been key to Finland's foreign policy since it gained independence from Russia in 1917. It declared itself neutral following the Winter War in 1939 and the so-called Continuation War in 1941, both against the Soviet Union.

The Nordic countries' neutrality doctrine was discarded after the Cold War when they joined the European Union. But military nonalignment has remained in place despite both countries' increasing cooperation and interoperability with NATO over the last decade.

"There is a very deep bilateral relationship with the United States. There is also a trilateral agreement between Sweden, the United States and Finland. Sweden has also been an enhanced opportunity partner with NATO since 2014," Zebulon Carlander, a defense analyst and co-author of the book "Strategic Choices — The Future of Swedish Security," told DW.

That cooperation allows Sweden to cooperate and take part in military exercises with NATO. Likewise, when Sweden holds military drills, other NATO countries, in particular the US, participate.

Vanhanen says that while both Sweden and Finland have benefited from these types of defense partnerships, it may be time for the next step. "I think now we just have to look at this from another perspective and perhaps take it to the next level."

One outcome of last week's NATO Article 4 consultations, invoked by eight allies on the basis of their perceived threats to their own security, was that Sweden and Finland would receive intelligence information to be able to better assess the situation in Ukraine. 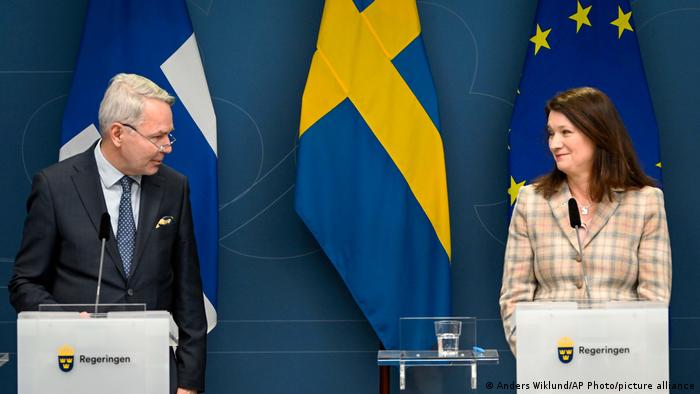 Finland and Sweden are reassessing their security and defense policies

Russia has framed the Nordic nations' perceived overtures towards NATO as a threat and said it would respond accordingly. Both Sweden and Finland reacted with outrage.

The war in Ukraine means the cards are being completely reshuffled. Sweden and Finland have long been strategically tied together in terms of defense and security issues. If one or the other were to make the NATO move, the other would likely follow suit, believe both Vanhanen and Carlander.

The blatant and unprovoked attack on Ukraine has forced Finland to rethink its position. "We have to reassess and reevaluate the Russian threat to Finland. I think it's fair to say at this point that Russia is a military threat to Finland as well," said Vanhanen.

"It is precisely because Russia threatens and bullies its neighbors that countries such as Sweden and Finland are having a NATO debate at all," Carlander pointed out. "Whatever Sweden decides rests solely with the Swedish government, parliament and population."

Swedish defense minister: 'We must be prepared for all scenarios' when dealing with Russia

One example of the new thinking is Sweden's decision to supply Ukrainian armed forces with lethal military aid, including 5,000 anti-tank weapons, which Carlander said is both significant and unprecedented in recent times.

"We have not given military aid in those volumes since the Winter War between Finland and the Soviet Union in 1939," he explained.

When will they join?

So how quickly would Finland and Sweden be able to join NATO? In early February, the head of Sweden's opposition Moderate Party, Ulf Kristersson, said he was convinced his country would join within the next five years. The war in Ukraine could well expedite that.

However, Sweden's upcoming parliamentary elections could throw up permutations that could "favor further polarization" and lead to delays, said Wieslander.

Still, Vanhanen says he's optimistic it could happen faster in Finland's case. "I think it would take place in a matter of a couple of months, and the longest, in a year."

This piece was updated on March 4 to include results from a new opinion poll.