Sweden′s Gotland gets ready for anything amid rising Russian threats | Europe | News and current affairs from around the continent | DW | 01.02.2022

Sweden's Gotland gets ready for anything amid rising Russian threats

Suspicious of Moscow's territorial ambitions, Sweden is preparing for worst-case scenarios. Teri Schultz visits the island of Gotland that's being remilitarized to protect the region key to Baltic Sea security.

Henrik Hellvard, just finishing up lunch in a cozy cafe in Gotland's capital Visby, thinks back to his mandatory military service on the island decades ago, learning to fight "the enemy."

"It was always the Russians," he chuckles. "We aimed our guns and spoke about the Russians."

There's always been good reason to practice defending this geo-strategic gem: Seize the Baltic Sea island of Gotland and you control the airspace and sea access to Estonia, Latvia and Lithuania along with Finland.

"The Russians" didn't try to take over Gotland (save for an occupation of a couple of weeks in the early 1800s). On the contrary, as the Cold War thawed, the Swedish government assessed its relations with Moscow as so solid that it decided to completely disarm the island. By 2005, there were no permanent military units there anymore.

Three years later, Russia attacked Georgia, but Niklas Granholm, the director of studies at the Swedish Defense Research Agency, says the reaction from the West was too tepid to serve as a deterrent. "The alarm bells went off," he told DW, "but we pressed 'snooze' and went back to sleep."

Only in 2016, two years after Moscow illegally annexed the Black Sea peninsula of Crimea, did the Swedish government send troops and tanks back to Gotland. "That Russia is prepared to use military force against its smaller neighbors — that changed the assessment here," Granholm explained.

'We are ready to defend Sweden'

That changing assessment has gathered pace in the months since Russia began massing troops on its border with Ukraine. Russian warships have been conducting drills in the Baltic Sea. Swedish Defense Minister Peter Hultqvist says an attack on his country cannot be ruled out.

"You have 100,000 soldiers around Ukraine. You have immediate full military access for the Russians too in Belarus. We have a history [of] hybrid attacks towards Lithuania and Poland and we have very brutal language from the Kremlin," he explained.

"So that has a real impact on the total security situation. What we want to do now is to be very clear that we are ready to defend Sweden and because of that, we are also doing what we're doing on the island of Gotland." 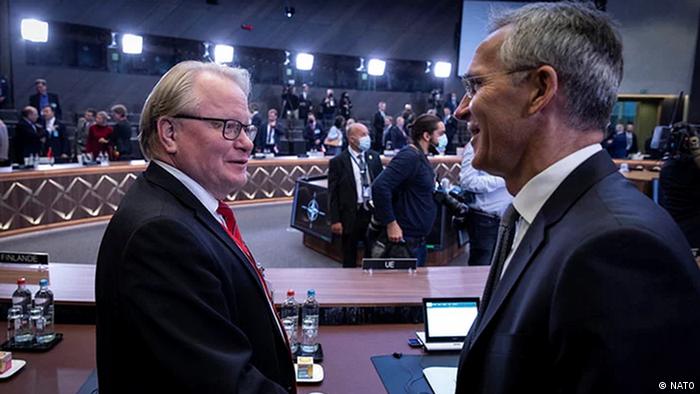 What Sweden is not doing is rushing to change its non-aligned status and join NATO. Hultqvist himself is opposed to that, saying it's not necessary since Stockholm has some 20 defense cooperation agreements with other countries, including the US; has security guarantees within the European Union; and a "very deep relationship" with neighboring Finland.

"We have prepared for a situation when we need interoperability and the possibility to work with other countries," Hultqvist told DW. "And if something happened here in our region, all of the countries here will have a direct impact and NATO will also have a direct impact from that, so we have to deal with the situation together."

The country can't count on NATO's self-interest spurring it to action on Sweden's behalf, says the chair of the parliamentary defense committee, Pal Jonson.

"We can hope, we can assume, we can wish that we get the support from NATO, but we cannot know until we join the alliance," he told DW. "We can have defense cooperation, but that's something qualitatively different from being a member of the alliance. That's crucial for Sweden because our security environment has severely deteriorated during the last years."

Jonson notes increased cyberattacks, disinformation, propaganda, and foreign direct investment into critical infrastructure as examples of rising threats. He believes the Swedish public has "significantly" changed its views about NATO from a few years ago as a result. "Today, about one-third support NATO membership, one-third are undecided and one-third are against [it]," he said. "So things are going in our direction."

Jonson is lobbying his colleagues to get a majority in the Swedish parliament in favor of joining NATO.

Granholm believes if Russian President Vladimir Putin were to make any precipitous moves in the Baltic Sea, "I think we would apply very quickly because then you would have a different sort of setup," he said, "and some kind of [pro-NATO] coalition will be formed very quickly." 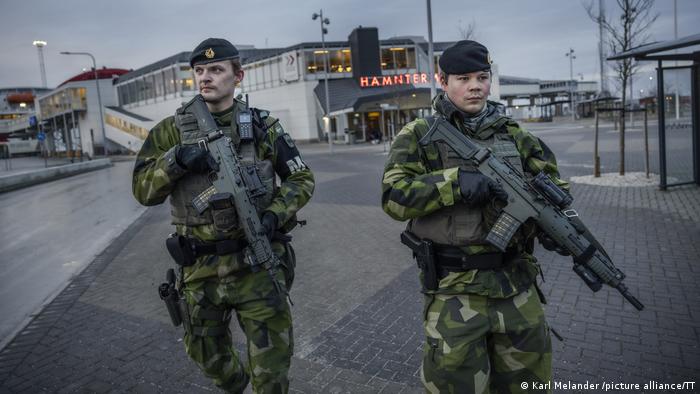 Swedish soldiers patrol Gotland as part of reinforced security measures in light of the Russian threat.

How does this end?

But as for now, even longtime Russia-watcher Granholm isn't hazarding any guesses at the Kremlin's next moves. "It's a bit like a game of chicken where one of the drivers — Russia in this case — has just thrown the steering wheel out the window," he said. "So we're heading to, unfortunately, some kind of crash, in my view."

Asked what a "crash" might look like, he says, "It's unpredictable and once you start a conflict, all bets are off. You can't really know how it ends."

Back on Gotland, though, Henrik Hellvard is buying furniture for his new summer home. He says he's not "worried" but does admit to being a bit less sanguine about the scenery now than six months ago when he bought the place. "We aren't used to the military in Sweden being so visible," he said. At the same time, he says the Russian specter has always loomed. "The fear of the Russians, that's always been there since I was a kid. So it's nothing new, actually."