The NATO chief has warned of "more deaths, more suffering and more destruction" amid Russia's invasion of Ukraine. The alliance has rejected implementing a no-fly zone, as requested by Kyiv. 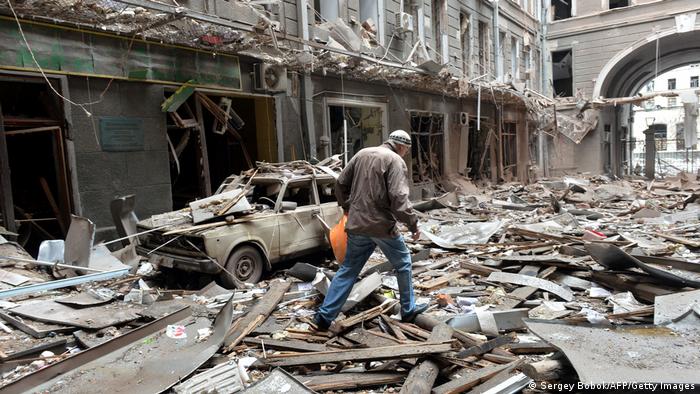 The Russian invasion of Ukraine is in its ninth day

NATO foreign ministers on Friday rejected the idea of setting up a no-fly zone requested by Kyiv. It comes as NATO Secretary-General Jens Stoltenberg's warned that the conflict in Ukraine would probably worsen in the coming days, with invading Russian troops attempting to gain control.

The takeover of a key nuclear power plant on Friday by Russian forces raised concerns of a nuclear disaster like that in Chernobyl in 1986.

Ukrainian Foreign Minister Dmytro Kuleba, whose country is not a member of the alliance, addressed the meeting of the NATO diplomats via video link.

A meeting of EU foreign ministers, many from NATO member countries, was also taking place in Brussels. US Secretary of State Antony Blinken and Canadian Foreign Minister Melanie Joly were also in attendance.

The gatherings come amid growing fears that the conflict in Ukraine could spill over into other European countries.

Scholz: 'NATO and its members will not take part in this war'

What did the ministers resolve?

Following the meeting, Stoltenberg warned that the coming days in Ukraine were "likely to be worse."

"This is President Putin's war, one he has chosen, planned and is waging against a peaceful country. We call on President Putin to stop this war immediately, withdraw all his forces without conditions and engage in genuine diplomacy now," Stoltenberg said.

Stoltenberg emphasized that NATO's role was to avoid the conflict spreading beyond Ukraine and that the alliance was not seeking a war with Russia.

"At the same time, we have a responsibility as NATO allies to prevent this war from escalating beyond Ukraine because that would be even more dangerous, more devastating and would cause even more human suffering."

Jens Stoltenberg: 'NATO is not seeking a war with Russia'

Stoltenberg also said the alliance's members had agreed that there should not be NATO planes in Ukrainian airspace or NATO troops on Ukrainian soil, thus rejecting Kyiv's call for a no-fly zone.

Ahead of the meeting, Stoltenberg described the takeover of Ukraine's Zaporizhzhia nuclear power plant by Russian troops as an act of "recklessness."

The plant is in the hands of Russian forces after a fire in a training center caused by shelling was extinguished early on Friday. Authorities have said that so far, radiation levels have remained normal at the plant.

"Overnight we have also seen reports about the attack against the nuclear power plant. This just demonstrates the recklessness of this war and the importance of ending it and the importance of Russia withdrawing all its troops and engaging good faith in diplomatic efforts," Stoltenberg said On the sidelines of the conference, British Foreign Secretary Liz Truss told reporters that her country wants an urgent meeting of the UN Security Council in view of the attack on the plant.

The attack was "a threat to European security and stability and we need those responsible to be held to account," she told British television.

Ahead of the meeting, NATO states had already voiced objections to Kyiv's request for a no-fly zone.

Lithuania said such a measure would drag the alliance into the war.

"All encouragements for NATO to get involved into the military conflict now are irresponsible," said Lithuanian Prime Minister Ingrida Simonyte.

Canadian Foreign Minister Melanie Joly said NATO was intent on avoiding the triggering of a wider international conflict, but said all scenarios should be discussed.

"NATO shouldn't be dragged into this conflict," said Czech Foreign Minister Jan Lipavsky. "No-fly zone means NATO being in a conflict since it will be NATO forces enforcing this no-fly zone."

France's presidential office has described Ukraine's desire for a no-fly zone as "a very legitimate request and very difficult to satisfy."

Top US diplomat Blinken said, however, that although NATO was a defensive alliance, it was prepared to take offensive action if necessary.

"Ours is a defensive alliance. We seek no conflict. But if conflict comes to us, we are ready for it, and we will defend every inch of NATO territory," he told reporters.

This article previously stated that Ukrainian Foreign Minister Dmytro Kuleba was present at the meeting. In fact, he only addressed the meeting via video link from Kyiv. DW apologizes for the error.

Stoltenberg: 'We condemn the attacks on civilians'