Ukraine: The risks of war in a nuclear state | Environment | All topics from climate change to conservation | DW | 04.03.2022

Ukraine: The risks of war in a nuclear state

The fear that Russia's invasion of Ukraine could escalate to a nuclear war is real. But what happens now that its largest active nuclear power plant has been caught in the crossfire? 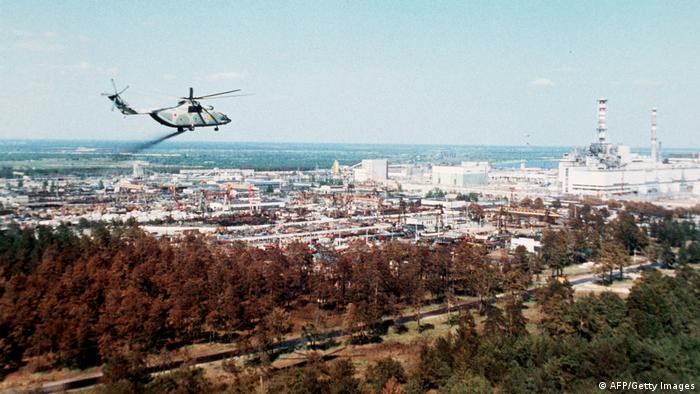 An army helicopter tries to help diffuse radiation during the 1986 Chernobyl nuclear disaster. Now the military could threaten a meltdown if nuclear plants are caught up in the Ukraine war

When Russian troops advanced on Zaporizhzhia, Europe's largest nuclear power plant on Friday, they didn't only trigger a fire in a training building within the facility, but also global fears of a major nuclear catastrophe.

Though the State Nuclear Regulatory Inspectorate of Ukraine reported that the blaze had been extinguished, that no radiation leaks had been detected and that staff were able to continue working at the site, the attack has brought the world's attention to the realities of a war being fought in a country so reliant on nuclear energy.

"It is a unique situation in the history of nuclear power — in fact in history — that we have a situation where a nation is operating 15 nuclear reactors and is in the middle of a full-scale war," Shaun Burnie, nuclear specialist with Greenpeace East Asia, told DW.

Located in southern Ukraine, the Zaporizhzhia power station has six of those reactors and produces around one-quarter of Ukraine's electricity. Only one reactor is currently in operation, according to the nuclear regulator.

Not built to protect against full-scale war

Burnie said building in protection in the event of a full-scale war was never part of a nation's planning, "at least in terms of commercial nuclear power."

He described the fighting at Zaporizhzhia as "a horrific first in the atomic age" and asked "what about the military threat to the three other operating nuclear plants in the Ukraine?"

Though some Cold War-era reactors in the Soviet Union were built underground to ward off military threats, the "enormous facilities" in Ukraine were all built above ground, Burnie explained.

"A nuclear power plant is one of the most complex and sensitive industrial installations, which require a very complex set of resources in ready state at all times to keep them safe. This cannot be guaranteed in a war," Burnie and Greenpeace East Asia colleague Jan Vande Putte wrote in a briefing released Wednesday on the vulnerability of nuclear plants during military conflict.

Operating reactors are especially vulnerable in the event of a electricity grid shutdown during wartime. If a plant's power supply was incapacitated due to heavy bombardment in the region, this could disable reactor cooling — and the cooling of spent fuel storage that is contained within relatively light walls.

In a worst-case scenario, this could lead to a Fukushima-like meltdown and "massive releases of radioactivity," Burnie said.

Armed conflict in the region of Zaporizhzhia "raises the specter of major risks," according to the briefing.

The site is already vulnerable, the authors say, as some aging reactors were built and designed half a century ago in the 1970s. Roger Spautz, nuclear campaigner at Greenpeace France and Luxembourg says the original 40-year lifespan of these reactors has already been expanded — as is also the case in France.

"The biggest risk is that spent fuels are hit by a missile or can't be cooled due to the disabled energy system," Spautz said. "You need electricity running 24 hours a day," he said, noting that diesel backup generators may not be able to run for several weeks, which may be necessary in wartime.

Burnie said structures built for spent-fuel containment could also be "destroyed accidentally" in the crossfire.

"Nuclear power plants are defined as 'installations containing dangerous forces' under international humanitarian law and should never be attacked," said Doug Weir, research and policy director of the UK-based Conflict and Environment Observatory, referring to the Geneva Convention.

Burnie believes that Russia, which has more than twice as many reactors as Ukraine, understands the consequences of a direct attack on these facilities — including nuclear contamination of Russia itself if winds blow in a easterly direction.

He called on the IAEA to intervene and support a 30-kilometer (18-mile) nonconflict zone around the nuclear power plants, but fighting ultimately broke out at the site as Russian troops occupied the plant on Friday, according the Ukraine's nuclear regulator.

Spautz is concerned that the Russian military capture of a power plant will limit the ability of staff required to properly manage it. "You need several hundred technical staff who know the plant," he said.

The Greenpeace briefing on the vulnerability of nuclear plants in Ukraine notes that staff would be needed in the event of flooding from the Dnieper river, which flows through the vicinity of the Zaporizhzhia plant.

Should the system of Dnieper dams and reservoirs that provide the cooling water for the Zaporizhzhia reactors be damaged and the supply of water limited, nuclear fuel could begin to overheat and release radiation.

"All these facilities need constant monitoring," Burnie said. "They are not passively safe."

This article has been updated to include information about the Zaporizhzhia nuclear power plant.

Russians take Chernobyl ― What we know

Russia’s capture of the Chernobyl nuclear power plant raises concerns of nuclear safety. Here’s a look into the state of the facility and its reactors.