The French president announced a plan to build at least six new plants by 2050, despite enormous cost overruns and decadelong delays in completing a prototype. He also touted massive investments in renewable energy. 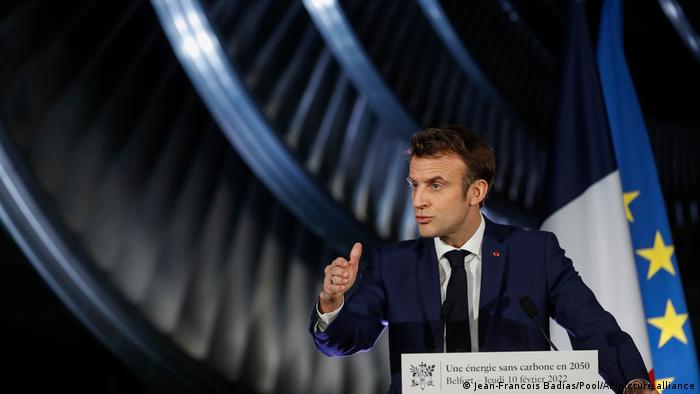 France has been slow to invest in renewables, instead sticking with its ageing nuclear plants to generate 70% of its energy

President Emmanuel Macron on Thursday outlined his vision for France's energy future and announced a major plan for the construction of at least six new nuclear reactors by state-controlled energy giant Electricite de France (EDF) while on a campaign visit to a turbine factory in the eastern industrial city of Belfort, just weeks ahead of a presidential election in April.

The third-generation pressurized water reactors (EPR) facilities are to be completed by 2050. Macron also said he was looking into the possibility of building a further eight. The whole project is being pitched under the motto of reducing France's greenhouse gas emissions.

Beyond nuclear power plans, Macron said 50 offshore wind parks were slated for construction — France currently has none, despite an abundance of coastline — and that onshore solar capacity would double and hydroelectric facilities would also not be forgotten.

Macron's main emphasis, however, was on nuclear energy, a particular point of pride with the French, providing roughly 70% of the nation's energy.

Despite concern about the enormous cost and complexity of building new nuclear power reactors, Macron showed his support for nuclear energy as ecologically friendly and economically viable option, saying: "The time has come for a French nuclear renaissance."

Along with announcing new construction, Macron said he wanted EDF to extend the lives of older nuclear plants from 40 years to 50: "I want no reactor that has the capability of producing (electricity) to be closed in the future ... unless obviously for safety reasons."

"We are fortunate in France to be able to count on a strong nuclear industry, rich in know-how and with hundreds of thousands of jobs," Macron said.

Belfort is home to a key manufacturing site that produces turbines to be used in future power plants. It is well-known to Macron, who, while serving as finance minister in 2015, was instrumental in facilitating its sale by French industrial giant Alstom to US rival General Electric (GE).

The deal was widely criticized at the time, with opponents saying it would jeopardize French energy independence and cost thousands of jobs.

On Thursday, under pressure from the French government, EDF announced that it had agreed to buy back GE's nuclear turbine branch for $200 million (€175 million euros).

EDF, which is heavily indebted, has faced difficulties in trying to build its latest-generation EPR reactors in separate projects in France, Britain and Finland.

The company estimates that it can build six of its reactors for France within 15 years at a cost of €50 billion ($57 billion).

Currently, EDF's flagship French project in the northern city of Flamanville — a prototype for the plants Macron spoke of — is running four times over its €3.3 billion budget and 11 years behind schedule.

Though nuclear endeavors tend to be extremely costly, France is decidedly more relaxed about the prospects of financing such projects after it was recently able to convince the European Commission to classify nuclear power as "green" in its taxonomy guide for investors — meaning that it is considered environmentally friendly, and thus investment-worthy.

Never too old to go offline

Currently, more than a dozen of France's 56 aging nuclear reactors are offline — seven for maintenance and five for serious corrosion damage. Overall output has dropped to around 55% to 60% of capacity. France also lags behind the rest of Europe when it comes to investments into renewable energy sources.

In 2021, France's nuclear authority agreed to extend the operational lifetime of the country's 32 oldest reactors by a decade, to 50 years. Since most of France's reactors were built in the 1980s, they could be shut down in the 2030s.

Paris argues that the new plan will maintain energy supplies amid increasing demand, while at the same time allowing France to achieve carbon neutrality by 2050 and help reduce dependency on imported fossil fuels.

Nuclear energy produces far lower emissions than coal, oil or gas, but plants are expensive to build and produce radioactive waste that remains deadly for tens of thousands of years.

That is an issue that France has yet to come to grips with — its cooling pond at the La Hague reprocessing plant will be full by 2030 and the country has not established a permanent nuclear waste storage facility to replace it.