Russian authorities have given out the first passports to residents of Ukraine's separatist regions, shrugging off international criticism. Kyiv said it would never recognize documents issued by the "aggressor country." 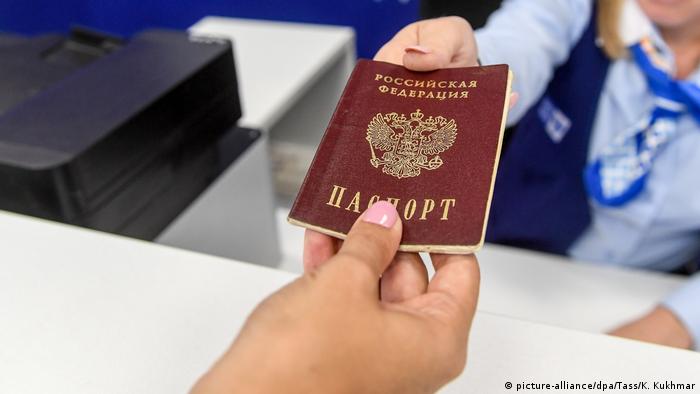 The first group of Ukrainian nationals claimed their Russian passports under a simplified procedure on Friday as part of a Russian program condemned by the Ukrainian government in Kyiv and the country's Western allies.

The procedure applies to residents of the Donetsk and Luhansk regions in eastern Ukraine. In late April, Russian President Vladimir Putin signed a decree to expedite the process, allegedly on "humanitarian grounds" such as enabling international travel for eastern Ukrainian residents whose passports have expired.

A similar decree, which applies to expat residents of Russian-annexed Crimea and their family members, came into force in early May.

Earlier this week, the EU slammed the initiative as contrary to "the spirit and the objectives" of the Minsk peace accords signed by Russia and Ukraine in 2015. A spokeswoman for the EU's top diplomat, Federica Mogherini, said the distribution of Russian passports was "another attack on Ukraine's sovereignty by Russia."

'Flagrant violation of all rights and morals'

Russia, however, seems set on continuing with the program. On Friday, Russian Foreign Ministry official Oleg Agarkov said his migration office in Rostov Oblast, which borders the separatist regions, had received 12,000 requests for passports.

Agarkov said 1,200 entries had already been processed and accepted. Several dozen Ukrainians who claimed their passports on Friday had to take an oath and provide fingerprints.

In turn, Kyiv warned that the passports would be declared invalid if used to cross the Ukrainian border or used on Ukrainian territory.

On Friday, Ukrainian Prime Minister Volodymyr Groysman said the passports were a "flagrant violation of all rights and morals."

"I emphasize that we will never recognize the citizenship issued by the aggressor country," he wrote on Twitter.