Russia's Federal Security Service says it has foiled attempts by Ukrainian forces to carry out attacks in Crimea. Ukraine has denied the allegations. 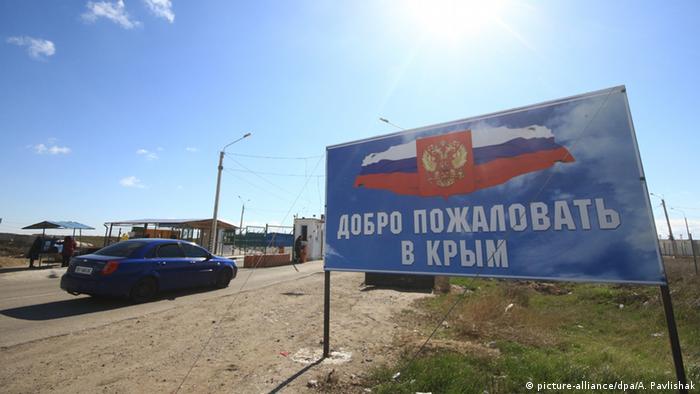 Russia's Federal Security Service (FSB) said that Ukrainian special forces had attempted to enter Crimea with two groups of "saboteurs" over the past weekend, adding, however, that the incursions had been thwarted.

For the second time, a group of French politicians visits the Crimean peninsula, which was annexed by Russia. Ukraine has reacted with irritation because the guests will attend a Russian military parade. (28.07.2016)

Russian President Putin has signed a bill that would annex Crimea, little more than a day after the region voted to join Russia. The US, meanwhile, has sent its vice president to eastern Europe as a message to Moscow. (18.03.2014)

It said a Russian soldier and a FSB employee had been killed in clashes on the night of August 6 - 7.

The alleged attempted incursions, which Russia's FSB described as acts of "terrorism," were reportedly meant to target critical infrastructure, according to the FSB.

"The aim of this subversive activity and terrorist acts was to destabilize the socio-political situation in the region ahead of preparations and the holding of elections," an FSB statement said. Russia is gearing up for nationwide elections on September 18 and President Vladimir Putin has warned that "foreign enemies" were seeking to disrupt the vote.

The FSB also stated that 20 homemade explosive devices, ammunition and other armaments were allegedly found, describing them as weapons commonly used by Ukrainian special forces. The Russian claims followed a recent surge in fighting in eastern Ukraine, with July 2016 reported as the most deadly in more than a year.

The Federal Security Service is Russia's principal security agency and is considered to be the main successor agency to the Soviet-era KGB.

A spokesman for Ukrainian defense intelligence squarely denied the Russian accusations, telling the Reuters news agency it was "false information."

"Ukraine has not and will not retake its territory with force," Yury Tandit of Ukraine's Security Service told the Interfax news agency.

The Organisation for Security and Cooperation in Europe (OSCE), tasked with monitoring the border between mainland Ukraine and Crimea, did not report any incident. But it said that car traffic was halted this week and that border guards appeared to be on "heightened alert."

Crimea governor Sergei Aksyonov meanwhile said that any attempts to destabilize Crimea would be prevented "in the harshest possible way."

"The safety of residents and guests of the peninsula is fully assured," he wrote on Facebook.

Russia annexed Crimea from Ukraine in March 2014 - shortly after Ukraine's change of government that year. Russia subsequently arranged a referendum among Crimean residents in which they voted in favor of becoming a part of Russia, citing this as legitimization.

Ukraine, along with the United Nations and many other countries, regards the annexation as a violation of international law. But since the annexation, Crimea has remained largely peaceful. The Russian move did, however, trigger US and European Union sanctions.

Meanwhile, a separatist conflict in two regions of Ukraine's industrial east has seen some 9,500 people killed. Ukraine and the West largely blame Moscow for fueling the separatists' ambitions.

The Caucasus to the Koreas: A world of frozen conflicts