Moscow has said its maneuvers in the Caspian Sea are not a sign that it intends to interfere between the warring nations of Armenia and Azerbaijan. Fighting over the disputed Nagorno-Karabakh region flared up last month. 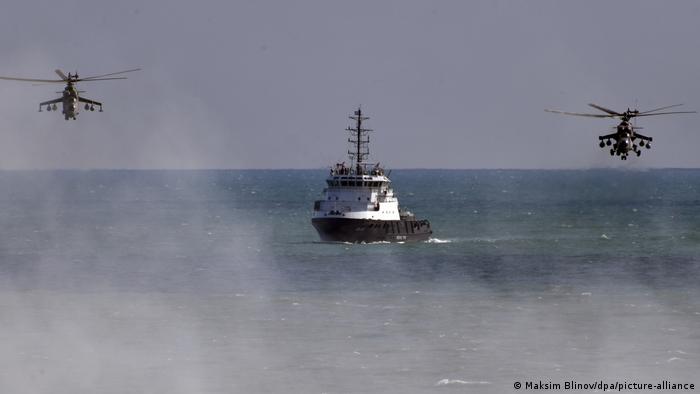 Russia on Friday said its navy had begun military exercises in the Caspian Sea, but insisted there was no threat to neighboring states as the conflict between Armenia and Azerbaijan over the Nagorno-Karabakh region showed no signs of abating.

The exercises are taking place in the central waters of the Caspian Sea, to the north of the Azerbaijani capital of Baku, but the Russian Defense Ministry said in a statement that "the activities ... do not pose any threat and do not impose restrictions on the economic activities of the Caspian littoral states."

The drills will include artillery and rocket fire, and will consist of six ships, seven planes and more than 400 troops, the ministry added.

There were further signs on Friday that a cease-fire, brokered by the Kremlin last Saturday, had failed to hold as the Nagorno-Karabakh Defense Ministry reported another 29 military casualties.

The total number of servicemen killed since fighting broke out on September 27 now stands at 633.

US Secretary of State Mike Pompeo described the ongoing conflict as "a powder keg of a situation."

The most recent outbreak of violence is the worst in the South Caucasus since Armenia and Azerbaijan went to war over Nagorno-Karabakh in the 1990s, and has raised fears that Russia and Turkey could yet get drawn into the conflict.

Pompeo criticized NATO ally Turkey over the fighting, in which Ankara backs Azerbaijan, saying its stance was worsening the situation in Nagorno-Karabakh, which is internationally recognized as part of Azerbaijan but populated and governed by ethnic Armenians.

Armenia, unlike Azerbaijan, is a member of the Russia-led Collective Security Treaty Organisation (CSTO) military alliance and Yerevan has made clear it is holding out for support from Moscow.

The warring countries had agreed to pause hostilities over the disputed Nagorno-Karabakh region just days ago. Russia is calling for both sides to heed the terms of the cease-fire.