One hundred buildings in and around the Russian capital have been evacuated, due to bomb threats. A string of false alarms has caused disruption in Russia's largest cities. 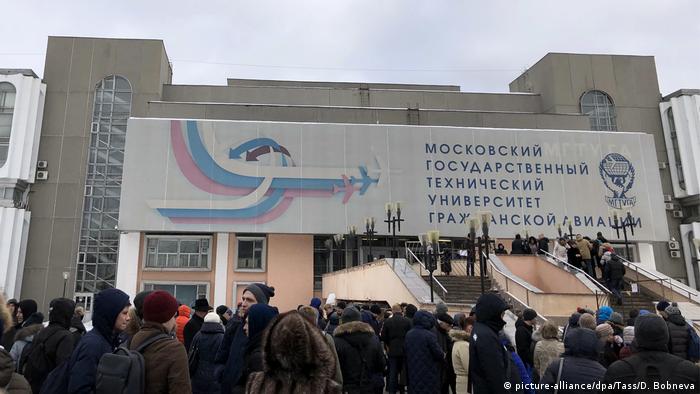 A series of fake bomb threats forced tens of thousands of people on Tuesday to evacuate buildings in Russia's capital of Moscow.

School children, office workers and shoppers were among those who had to briefly empty 100 buildings in and around the city, reports said. In total, some 20,000 people were affected, while authorities swept the areas and ruled out any danger.

Some institutions, such as the Russian State University of the Humanities, cancelled activities for the day due to the disruption caused by the mass evacuation.

Tuesday's incident was the latest in a wave of false bomb alarms to hit Russia. Last week, some 55 buildings in Russia's second city Saint Petersburg had to be evacuated. Similar threats were reported and led to evacuations in several other cities like Krasnoyarsk in Siberia and Volgograd in the south.

In November 2018, a train station and 12 shopping malls had to be evacuated in Moscow due to anonymous calls warning of bomb threats that turned out to be fake.

The origin of the false alarms has not been determined, but a spate of false alarms that took place in 2017 and during the 2018 FIFA World Cup turned out to be intentional hoaxes.

Russia's secret service later said that those fake bomb threats came from Russians living abroad who worked with other accomplices within the country.

The people of Kolomna have been protesting against Moscow refuse being dumped near their city. Now, vocal anti-garbage activists have had their homes raided and searched. DW's Miodrag Soric reports. (01.02.2019)

Museumgoers looked on as a painting was taken from Moscow's Tretyakov Gallery, not realizing they were witnessing a theft. The painting by Russian artist Arkhip Kuindzhi is thought to be worth €160,000. (28.01.2019)

Russia has opened a criminal case against a US citizen accused of spying. Relations between Moscow and Washington have soured since Russia's annexation of Crimea and accusations Russia interfered with US elections. (31.12.2018)