Parties tied to the ruling United Russia have retained their majority in Moscow despite flagging support. Protests and the exclusion of opposition candidates put the poll under intense scrutiny. 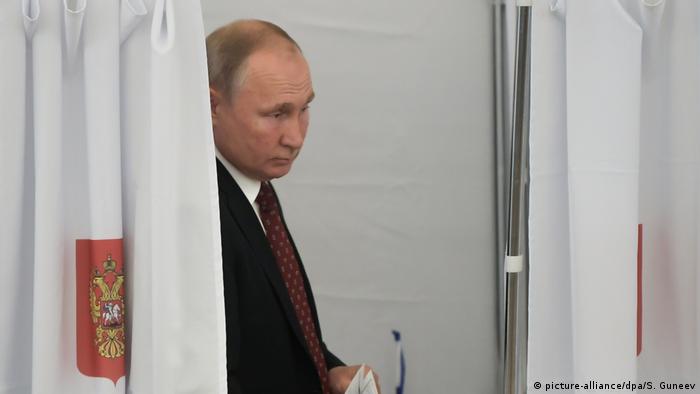 Kremlin-backed parties kept their majority in Moscow's municipal legislature, according to final vote results on Monday morning. However, they saw their support slashed after months of protests over the vote that barred opposition voices and critics of President Vladimir Putin from running for office.

Although Putin is technically an independent, he has strong ties to United Russia, which reportedly came away with only 26 of the Moscow Duma's 45 seats, a major drop from the 38 it held before. Some former United Russia members had branded themselves independents before the vote, however, as support for the party has plummeted amidst rising poverty across the country.

Two other parties that are loosely controlled by the Kremlin, the Communists and the center-left A Just Russia are expected to win 14 and 4 seats, respectively.

Yabloko, a small social liberal and green party, is on track for three seats. Its lead candidate Sergei Mitrokhin had been initially barred from running, but was allowed to contest the election after a city court in his favor.

Daria Besedina, a Yabloko candidate who won her district, wrote on Twitter that despite the minor victory "We shouldn't forget that these were not real elections... a lot of genuine (opposition) candidates who would have won were not allowed to run... Moscow would have got an opposition Duma if all the candidates were registered."

In mid-July, the Central Election Commission refused to register most opposition politicians as candidates, claiming that the signatures of support they had gathered in order to run were falsified.

One such candidate was popular anti-corruption activist Alexei Navalny, whose Russia of the Future party had been hoping to make gains against United Russia head of national elections in 2021. However, 20 candidates linked to his Smart Voting campaign to strengthen opposition voices now have seats in the Moscow Duma.

"This is a terrific result, and we fought for it together," Navalny wrote on Twitter.

Despite massive protests, the electoral commission did not budge on its decision to exclude Navalny from the election.

Local elections were held across the country, but the Moscow vote was the most closely watched following the summer of demonstrations.

United Russia won several governorships across the country, but notably suffered heavy losses in the far east of the country. Indeed, the Liberal Democratic Party won all but one seat in the Khabarovsk City Duma and dominated in several other local elections including the mayoral vote.

No sooner had he walked out of a Moscow jail than activist Ilya Yashin was detained for a third time, accused of urging mass protests. Several opposition politicians are barred from next month's Moscow city elections. (18.08.2019)