Russia begins ban on grain exports after fires devastate crops | Europe | News and current affairs from around the continent | DW | 15.08.2010

A ban on Russian wheat and grain exports went in to effect on Sunday, and is expected to last until the end of the year. Severe drought and wildfires have destroyed the harvest and ravaged agricultural land. 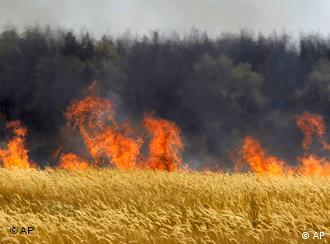 A ban on Russian grain exports went into effect on Sunday, as authorities try to reduce the chance of a food shortage following the destruction of crops in wildfires.

An estimated 10 million hectares (24.7 million acres) of agricultural land has been devastated by the fires following the worst heat wave in Russian history.

Russia is one of the world's biggest producers of wheat, barley and rye. However a quarter of the country's crops have been destroyed, according to President Dmitry Medvedev.

Prime Minister Vladimir Putin banned grain exports in an attempt to keep domestic food costs down, however there is concern that the crop levels are not even enough to supply domestic demand.

Putin said the grain crop could be as low as 60 million ton, and 79 million ton is needed to meet domestic consumption.

Data from the Agricultural Ministry shows that even if the ban is lifted, there may not be enough grain to export. 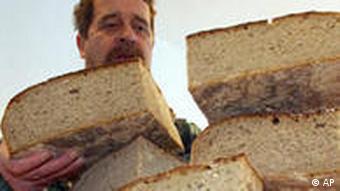 Bread prices are likely to rise in the short term

As a result of the ban, world wheat prices have rocketed to a two-year high and there are worries about a crisis in global food supplies.

In a statement, First Deputy Prime Minister Viktor Zubkov stressed that the government needed to balance the interests of grain traders with the need to maintain stability on the domestic food market.

"We understand the anxiety of our exporters," he said. "The ban is a temporary measure."

"Furthermore, we are continually monitoring and analyzing grain, feed and seed supplies on the domestic market," he added.

Some within Russia have criticized the ban, saying it will take the country years to regain its international market position and risks driving domestic grain producers out of business.

The type of wheat Russia produces is best suited to making unleavened bread, and much of its wheat is imported to the Middle East. Egypt is its largest market, followed by Turkey, Syria, Iran and Libya.

In addition to affecting the cost of such food staples as bread, a shortage or hike in the price of grain is expected to have a knock-on effect across several European industries. 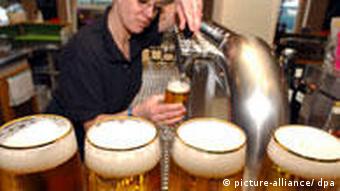 European brewing giants such as Anheuser-Busch InBev have said the rising grain prices will not hit the group until 2012, as they buy their barley and other grains far in advance.

Although Europe's biggest food groups Nestle, Unilever and Danone have said they will be cushioned from the rise in grain prices, smaller and private-label food groups are likely to suffer.

Those who are big wheat users such as Dutch bakery group CSM, or British bread and cake maker Premier Foods have already suggested they may have to increase prices.

The ban came into force on Sunday and is due to last until December 31. However the Russian leadership have different ideas about whether the ban will be extended or lifted.

First Deputy Prime Minister Zubkov has said they will discuss after October 1 whether to extend the grain export ban into next year.

Ukraine war: How the Russian invasion is changing farmers' crops 10.09.2022

The war in Ukraine has made wheat farming and export difficult. So local farmers are turning to oil-producing plants instead. The government plans to build an innovative pipeline into Poland to help them.

A month after Russia and Ukraine agreed on a sea corridor to resume global exports of grain, high insurance premiums are just one issue. Experts have called for international support for Ukrainian farmers.