Russia and US agree on extension of Syria truce

The US and Russia have agreed that a cessation of hostilities in Syria is largely holding, and that it should be extended. However, the Russian military claims Syrian rebels have repeatedly violated the truce. 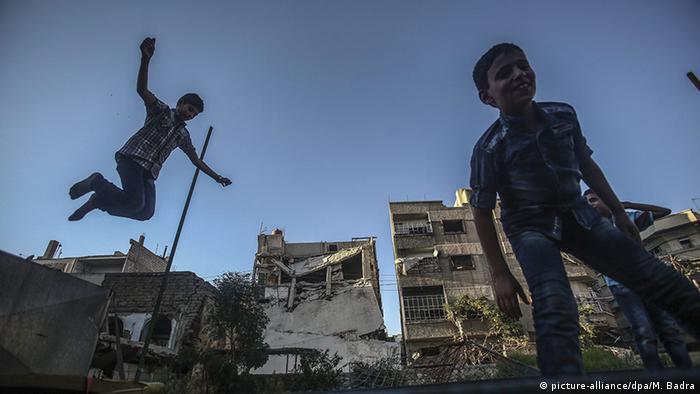 US Secretary of State John Kerry and his Russian counterpart, Sergei Lavrov, on Wednesday agreed the truce should be extended by another 48 hours to allow for increased humanitarian access.

"There was agreement that as a whole, despite sporadic reports of violence, the arrangement is holding, and violence is significantly lower," State Department spokesman Mark Toner said in a briefing.

"We also note that some groups controlled by the United States, such as Ahrar Al-Sham, have openly stated their unwillingness to cease fire," Poznikhir said. "The greatest number of violations is associated with these groups."

The US plans to cooperate with Russia in the fight against terrorists if the ceasefire in Syria holds. But in that case, Washington would actually be helping out Syrian President Assad, warns Björn Blaschke. (13.09.2016)

The truce in Syria continued to hold up on its second day despite reports of minor violations. The Russian government counted 23 breaches of the ceasefire in its first 24 hours, it was reported. (13.09.2016)

Despite the transgressions, Poznikhir said he supported the extension of the ceasefire for a further 48 hours.

Poznikhir said Russia had fully met its obligations under the terms of the ceasefire and that Syrian government forces had not returned fire in light of the violations.

Russia has urged Syrian rebels to separate themselves from "terrorists" so that the ceasefire can hold.

However, Poznikhir said there were doubts about whether the US would be able to fulfill its pledge to persuade the opposition to sever links with Fatah al-Sham, formerly al Qaeda's Syria branch the Nusra front.

The UK-based Syrian Observatory for Human Rights said it had not recorded a single civilian or combatant death from fighting in the first 48 hours of a ceasefire in Syria which came into effect on Monday night.

But it added that it recorded a number of incidents of shelling by various rebel factions and of shelling and airstrikes by pro-government forces around the country.

Poznikhir also said Russia had bombed the area north of the historic city of Palmyra, "where IS militants are concentrated," in the first such strikes since the truce came into force. The raids, he said, had killed 250 people and destroyed up to 15 trucks containing heavy machine guns.

Residents in Aleppo have welcomed the lull in fighting, but expressed frustration about the delay in promised aid.

"The truce is good, but it's not enough. We want food to come in," Abu Jamil, a resident of the rebel-held east of Aleppo, told the AFP news agency.

The head of Russia's ceasefire monitoring centre in Syria said that the Castello Road - the main supply route to Aleppo - had come under mortar fire. Vladimir Savchenko,head of Russia's ceasefire monitoring center in Syria, said that the attack could threaten the withdrawal of Syrian troops loyal to President Bashar al-Assad from the area. The pullout is slated to begin at 0600 UTC on Thursday.

The truce, which began at sundown on Monday, was agreed after marathon US-Russia talks in Geneva between Lavrov and Kerry last Friday as the latest part of efforts to end a five-year conflict that has killed more than 300,000 people.

The deal calls for a renewal of the truce every 48 hours, and for Washington and Moscow to jointly target jihadis like "Islamic State" and Fateh al-Sham, which are not included in the ceasefire.

Once any joint US-Russian operations begin, Syrian government warplanes will no longer be able to fly in any areas of Syria where there is opposition or Fatah al-Sham presence.