Citizens of Rome took to social media to accuse the city of having the wrong priorities. "The Eternal City" has been dealing with the damage, litter, and congestion caused by overtourism for years. 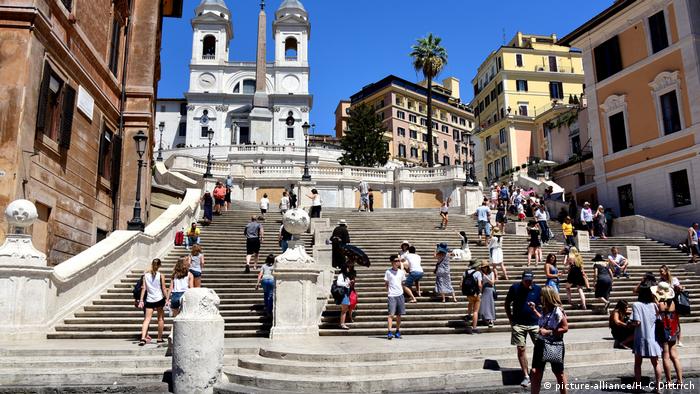 The Italian capital has been grappling with the increasingly devastating effects of overtourism for years, but locals say a new push to enforce a ban on sitting on the famous Spanish Steps is "foolishness" and a waste of resources.

The Spanish Steps, known in Italian as Trinita dei Monti for the church that sits atop them, have long been a favorite resting place for tired tourists. However, on Tuesday, police began enforcing a €250 ($280) fine for sitting on the steps, which can be raised up to €400 ($450) if the person dirties or damages the structure as well.

Italian journalist Edgardo Gulotta wrote on Twitter that it was ridiculous to focus on such a small issue when Rome has so many bigger problems.

"Rome goes from one excess to another," he wrote. "In a city in almost complete disarray...at the most famous stairway in the world, Trinita dei Monti, eight vigilant policemen are ready to issue a fine. In the rest of the capital, meanwhile, potholes, garbage, and buses in flames."

The city's most-traveled streets are routinely plagued by massive potholes, while residents also complain that after bad weather, strewn garbage, fallen trees and debris often go weeks or months without being removed. The city's public transport system is in disrepair, and a planned new subway line has constantly been delayed.

Singer and animal rights activist Daniela Martani also pointed out that the municipal government was making "a stairway more important than the lives of the horses" being forced to drive away "idiot tourists" in the chaos of Rome's historic center during a record-breaking heat wave in Europe.

Vittorio Sgarbi, the former minister of culture, told Italian news agency Adnkronos that "protecting a monument is fine...but the ban on sitting down is really excessive."

Sgarbi, who has played a controversial role in politics and more than once been accused of corruption, called the law a "fascist-style provision."

Last year, Rome implemented new rules to try and quell some of the worst excesses of overtourism. It banned street performers dressing up as historical figures, such as gladiators, to pose with tourists for a small fee. It also put an end to selling alcohol after 2 a.m., organized pub crawls, and eating near or on its many monuments and foundations. Tour buses have also been banned from the ancient city center.

Visitors to the city may also notice an increased police presence downtown to make sure the new rules are being rigorously enforced.

Rome is not the only Italian city grappling with the damage caused by millions of tourists. Venice, much smaller and harder to navigate than the capital, is calling for a cruise ship ban as both the ships and the streams of tourists who come off them are making the city dangerously congested.

Italy has been clamping down on anti-social or unwanted behavior in its tourist centers. In Trieste it involved a hammock, in Venice a camping stove and a cup of coffee by the ancient Rialto bridge. (19.07.2019)

How Amsterdam is fighting mass tourism

No other city in the world is cracking down so radically on mass tourism. The Dutch capital is fending off a particular kind of visitor with all the means it can muster. (07.03.2019)