After a 275-meter cruise ship crashed into a tourist boat, Venice residents have demanded that the giant vessels stay away. The issue of cruise liners sailing Venice's Giudecca Canal has long been a point of tension. 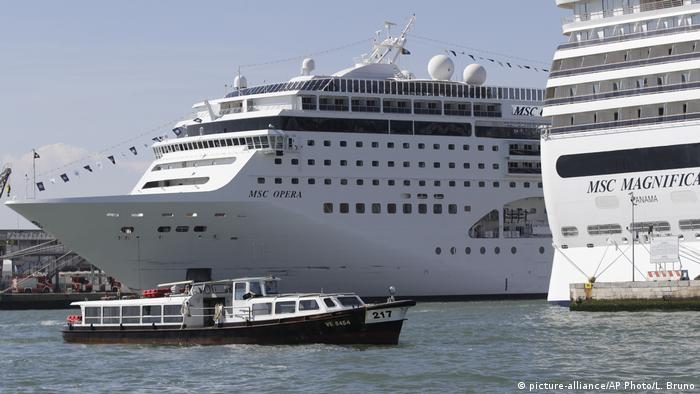 Around 5,000 residents of the northern Italian city of Venice on Saturday protested against the presence of cruise ships in the busy Giudecca Canal, following a ship accident earlier in the week.

Many of the demonstrators carried banners with slogans such as "Keep large boats out of the lagoon."

Critics say the waves the ships create are eroding the foundations of the historic lagoon city, which regularly floods, leaving iconic sites such as Saint Mark's Square underwater.

Last Sunday, the 65,500-ton Opera, a 54-meter high and 275-meter long liner, was approaching a passenger terminal on the Giudecca Canal when it hit the dock and a nearby ferry after a technical problem.

Footage of the incident showed passengers who had been waiting at a wharf in San Basilio-Zattere fleeing for safety as the huge ship, its horns blaring, crashed into the much smaller, moored "River Countess," which had 110 people on board.

In response to the incident, Italy's Transport Minister Danilo Toninelli said the government would come up with a "definitive solution" by the end of June.

Italy's government had previously promised to deal with the cruise ship problem.

The ban was in part a response to the deadly 2012 Costa Concordia disaster, in which the 115,000-ton cruise ship hit a rock formation off the island of Giglio in Tuscany after its captain sailed too close to the shore.

However, that law was later overturned by a regional court, which ruled that safety or environmental risks had not been proven.

Two years ago, the government announced that larger ships would be diverted from the historic center but failed to follow through on that promise.

A video posted on the Instagram account of the ever-elusive British artist Banksy documents a new installation showing a controversial huge cruise ship docking in Venice's lagoon. It appears to be the artist's own work. (23.05.2019)

The Italian government has given the go-ahead for cruise liners to be banned from the area close to Venice's city center. The issue has been an ongoing one, and the large vessels were banned once before.