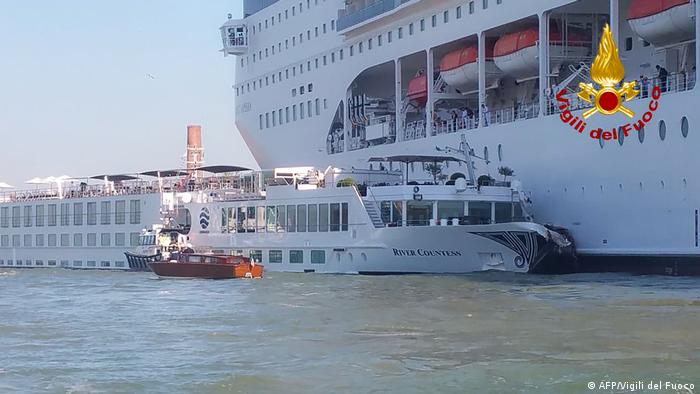 An amateur video posted on Twitter showed tourists running away and some falling into the water as the 65,591-ton MSC Opera cruise ship rammed into a parked tourist boat on the Giudecca canal in Venice on Sunday.

The 274-meter (899-foot) cruise ship crashed into the smaller Michelangelo tourist boat about 8:30 a.m. (0630 UTC) as it lost control before docking in San Basilio-Zattere terminal in the ancient lagoon city in Italy.

Venice Mayor Luigi Brugnaro confirmed on Twitter that a ship had rammed into the wharf. Officials said five people who had been aboard the tourist boat had sustained minor injuries.

The accident took place on the Giudecca Canal in the city center. For many years, local authorities have been debating whether cruise ships should be allowed access to the waterways because of potential environmental damage.

"Cruise ships must not sail down the Giudecca. We have been working on moving them for months now ... and are nearing a solution," Italy's environment minister, Sergio Costa, wrote on Twitter.

"In addition to protecting the UNESCO heritage city, we have to safeguard the environment, and the safety of citizens and tourists," Culture Minister Alberto Bonisoli said. The Geneva-based MSC Cruises said the ship experienced a mechanical problem as it was docking. The Opera was built 15 years ago and has a capacity for 2,679 passengers in 1,071 cabins.

"The MSC ship had an engine failure, which was immediately reported by the captain," Davide Calderan, head of a tugboat company involved in accompanying the ship into its berth, told Italian media.

"The engine was blocked, but with its thrust on, because the speed was increasing."

Venice is one of the most-visited European cities. In May, the city administration imposed an entry fee for millions of day trippers in order to keep the city clean and less crowded.