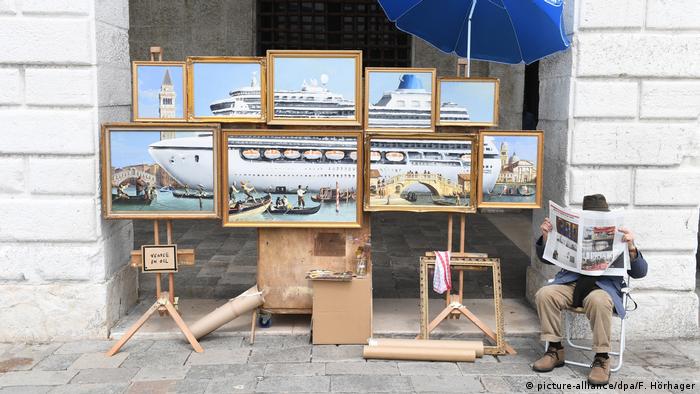 Coinciding with the Venice Biennale Arte, which opened May 11, a one-minute video posted on Banksy's Instagram account on Wednesday begins with what appears to be a local art vendor constructing his stall near St. Mark's Square in Venice.

"Setting out my stall at the Venice Biennale," a caption at the start of the video begins. "Despite being the largest and most prestigious art event in the world, for some reason I've never been invited," added the artist, likely the secretive Banksy himself, whose real identity remains hidden from the public.

The video clip shows a man, whose face is obscured throughout, setting up nine canvases in the public outdoor art market. The artworks form a montage of an enormous cruise ship floating in the Italian city's Grand Canal, surrounded by depictions of classical gondolas and gondoliers. The work (pictured top) is called "Venice in Oil."

"It's really beautiful, even more beautiful than the works we've seen at the Biennale," notes one passer-by in the video before two police officers tell the man holding a canvas that he needs to leave if he doesn't have a permit. The video ends with the mystery man pushing his work away as a cruise ship blows its horn in the background.

Cruise ship traffic to Venice has boomed in the last 15 years as tourist numbers have also ballooned. The artist seems to be asking whether the city sitting precariously on canals and lagoons can sustain the tourism barrage.

A stencil art work appearing in a Venice canal on May 14 that shows a young refugee holding up a pink flare has also been attributed to Banksy. Some publications say the work is a contrapoint to the shipwrecked refugee boat installation "Barca Nostra" by Swiss-Icelandic artist Christoph Büchel, however the author of the work, which did not appear on Banksy's Instagram, has not been identified. 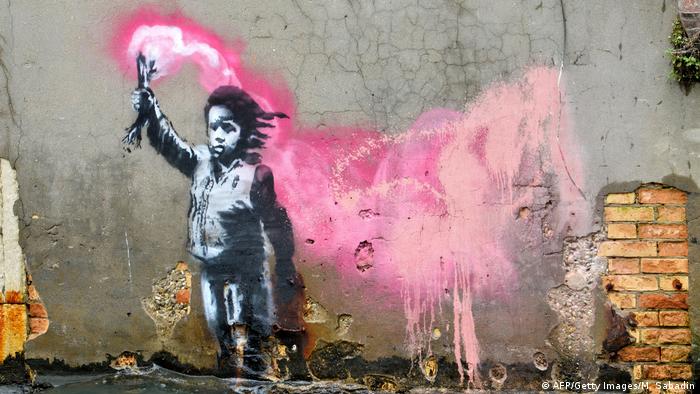 An alleged Banksy work depicts a migrant child wearing a lifejacket holding a pink flare. It is painted on the wall of a house overlooking the Rio de Ca Foscari canal in Venice

Meanwhile, a stenciled mural that appeared at the London base camp for Extinction Rebellion climate protests in April was widely attributed to Banksy.

The mural on a wall at Marble Arch, where the group had an encampment, shows a child holding an Extinction Rebellion sign beside the words: "From this moment despair ends and tactics begin."

Westminster City Council believes the work was genuine and has placed it under temporary protection. Meanwhile, the whereabouts of the Venice cruise ship montage is unknown. 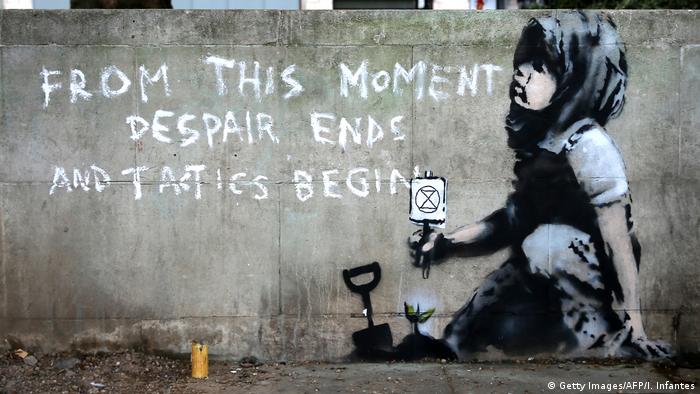 Banksy is credited with this response to climate crisis protests

The renowned street artist Banksy has released a video suggesting that the shredding of "Balloon Girl" didn't go as planned. The canvas wasn't totally cut into strips — and the artwork's value likely went up. (18.10.2018)

Buyer of shredded Banksy painting to go ahead with purchase

The winning bidder of a Banksy painting that self-destructed at an auction last week has said he will nonetheless go ahead with the purchase. Experts say the shredded painting could be worth more than the original. (12.10.2018)