Venice hosts its biannual International Art Fair this year for the 58th time. Contrasts galore await visitors at the world's largest art spectacle — and more than ever, the artists are inspired by political events. 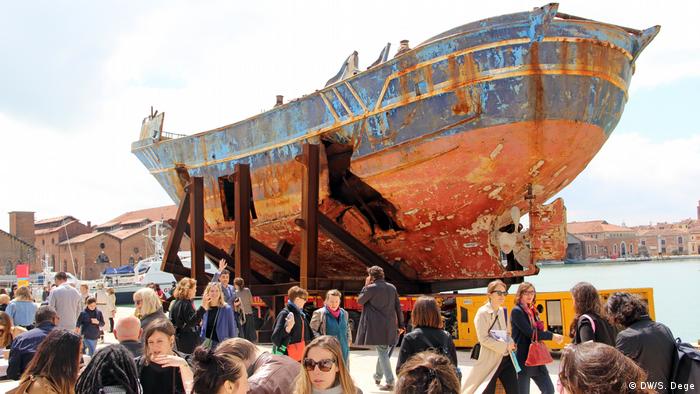 The mood in Venice these days is magical, and not just because of the romantic waters of the lagoon. Art is a magnet that draws the rich and famous in their yachts, many of which are moored at the Riva dei Sette, the main artery of the city. It seems that no one thinks twice about this shameless display of wealth.

The only vessel that doesn't quite fit is the "Barca nostra" (pictured above), a deathtrap of a boat that sank in April 2015 on its way from Libya to Italy. Several hundred people drowned. The Italian government salvaged the wreck in order to identify the bodies and bone fragments discovered in the hull. Christoph Büchel, a Swiss artist, named the wreck "Barca nostra" after the EU border protection mission Mare Nostrum. To the annoyance of right-wing Italian politicians, he has it on display at the Biennale.

Opposites like these come together effortlessly on the smartphones of Biennale visitors. The art show is a gold mine for photographers of all incomes and age groups. Tickets for the preview of the curators, artists and critics sold for horrendous prices, snapped up by the jet set. Women in Gucci and Prada suits are immortalized in selfies — after all, the Biennale is a catwalk, too. This year, it is more crowded than usual.

Read more: A huge migrant shipwreck on show at the Venice Biennale 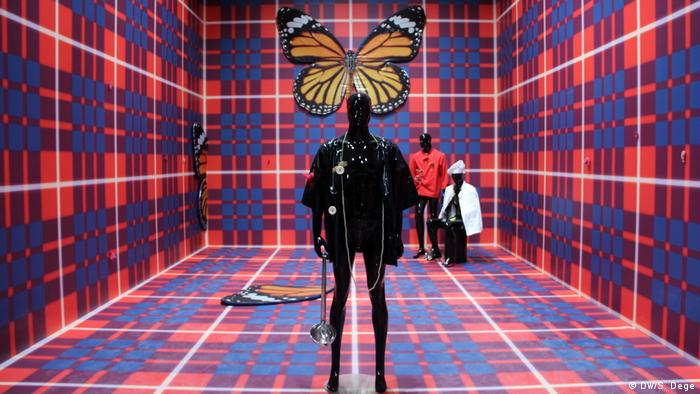 With an eye on art, curator Ralph Rugoff chose the motto "May you live in interesting times." On display are paintings, sculptures and countless photos and videos. Multimedia installations squawk and flicker in Biennale pavilions, as well as the historic Arsenale area that used to house the rope-makers of the city's fleet.

Fewer artists have been invited to this year's art show. For the most part, they focus on current issues, including globalization, digitalization, climate change and fake news. They resort to sarcasm and exaggeration or simply leave pressing questions unanswered and up to the viewer.

Dominique Gonzales-Foerster and Joianne Bittle created "Cosmorama,” an apocalyptic scenario based on climate change. German-Japanese artist Hito Steyerl takes the visitor on a multimedia journey through time into the underwater world of the lagoon city in "Leonardo's Submarine," spanning the centuries from the invention of a weapon by Leonardo da Vinci in 1515 to current arms exports. Images and sound flow together on three screens, like reality and fiction. 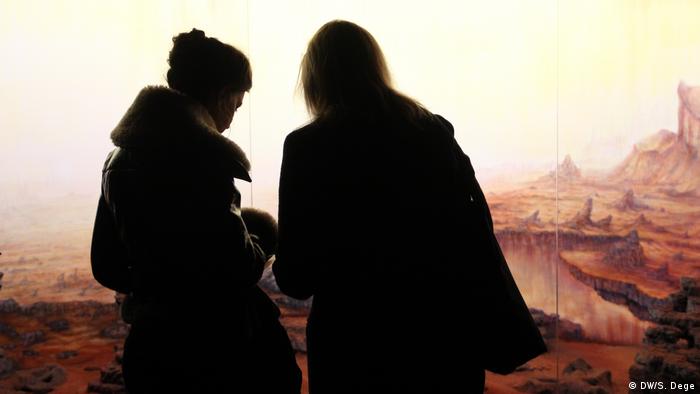 As usual, pavilions by different countries featured their own exhibitions. Some nations, such as Ghana, Madagascar, Malaysia and Pakistan, are there for the first time, while the Venezuelan pavilion stood empty because of the current unrest in the country. Many countries regard their artistic appearance as an opportunity to show national pride. At the opening of the Russian pavilion, it was astonishing to see how the illustrious attendees celebrated when the Russian flag was hoisted to military music during the opening.

Representing the UK, artist Cathy Wilkes poetically arranged strange human puppets in an exhibition room. In the Austrian pavilion, Renate Bertlmann presented a blooming field of red glass from Morocco in her solo exhibition. The Belgian pavilion has been transformed into a folklore museum by the artist duo Jos de Gruyter and Harald Thys. In it, robotic dolls perform obsolete European crafts, while marginalized figures of society - beggars, madmen, artists - are locked in jail cells. With so much to see, mobile phone cameras are constantly clicking. 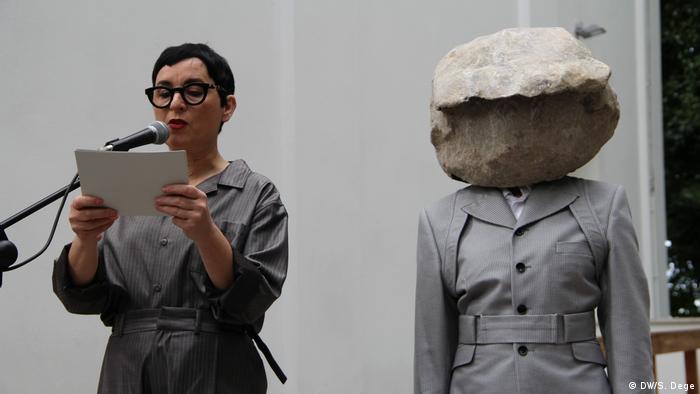 German artist Natascha Süder-Happelmann is responsible for the Germany pavilion. She has been using an alias and appearing in public with a rock-reminiscent mask

The German pavilion: Political but clumsy

The German Pavilion, which won the Golden Lion award for best pavilion two years ago, is especially serious this time around. In it, German-Iranian artist Natascha Sadr Haghighian had a space-dividing dam built. Loudspeakers play a sound collage of stray whistle tones in a space meant to reference an immigration detention center.

Haghighian, who has been appearing for months with a papier mâché stone mask and a fancy name, blatantly criticizes Europe closing itself off to refugees. Although cumbersome and a bit clumsy, her work makes a strong political statement – like much of the artwork at this year's biennale.

'Unbuilding Walls': Healing divisions with architecture at the Venice Biennale

Twenty-eight years after the fall of the Berlin Wall, the architecture office GRAFT presents work in the German Pavilion in Venice that aims to break down barriers. (05.02.2018)