How Amsterdam is fighting mass tourism

No other city in the world is cracking down so radically on mass tourism. The Dutch capital is fending off a particular kind of visitor with all the means it can muster. 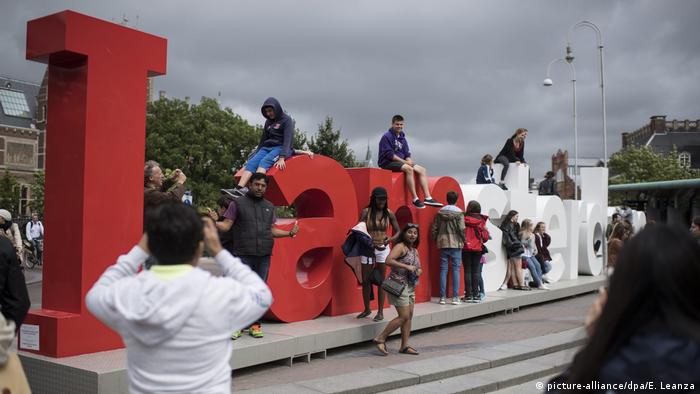 These days, in front of Amsterdam's Rijksmuseum, you'll see many baffled faces. Tourists tap nervously on their smartphones, look up briefly, then back to their screens again. They're looking for the world famous "I amsterdam" sign. But they'll be disappointed.

In early December 2018, the city removed the popular photo motif. It was a symbolic act in the struggle against mass tourism, which has brought the capital of the Netherlands to breaking point within an extremely short time. 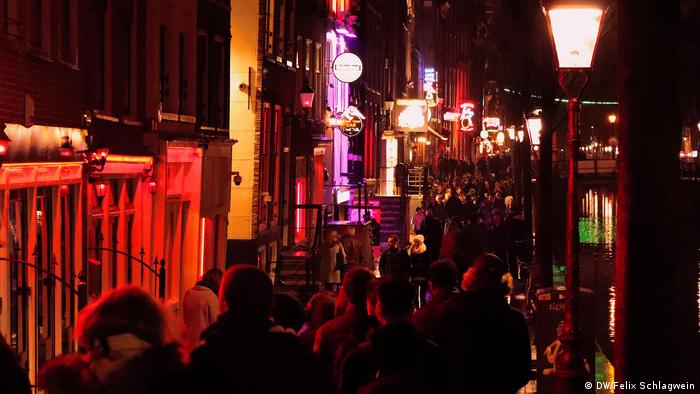 Even in the off-season tourists flock to the streets of central Amsterdam. The red-light district is especially popular. Here they push past sex shops, pubs and the prostitutes who wait for customers in their glass booths. In the summer it's so full here that the crowds move only at a snail's pace.

Many Amsterdam locals have had enough of the masses of tourists. They have moved to quieter districts because they could no longer stand the noisy, partying, binge-drinking, vomiting tourists. What could be done? Last summer the city passed a set of measures to make life for its residents bearable again. 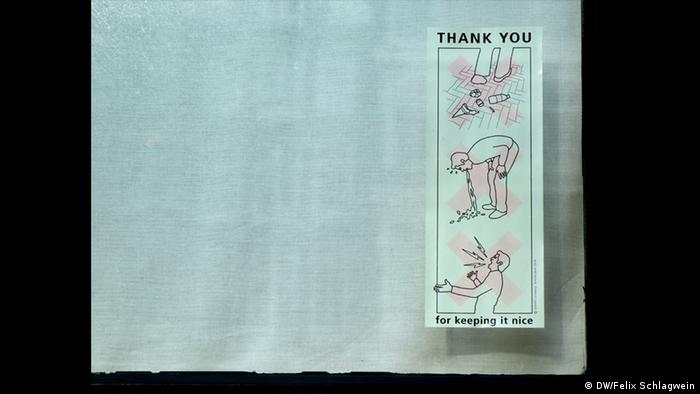 With stickers like the one in this window, locals ask tourists for more respect

Goodbye to hotels and souvenir shops

The gentle-sounding name "City in Balance" conceals an uncompromising program: a halt to building new hotels and souvenir shops, ticket sales outlets and cheese shops in which no local would ever set foot. The capacity of Schiphol Airport is to be capped and the berths for passenger vessels moved out of the city center.

"Of course we will still welcome tourists, but Amsterdam is first and foremost a city in which people live, and only secondly a tourist destination," says Vera Al, spokeswoman for Amsterdam's deputy mayor. That's why the city is also cracking down on private rental platforms such as Airbnb and Booking.com. Homeowners can sublet via such providers for no more than 30 days a year. For some streets, a ban on Airbnb is even under discussion. "Many Amsterdam residents now feel like foreigners in their own homes because they don't have any neighbors anymore — just changing groups of tourists," Vera Al explains. 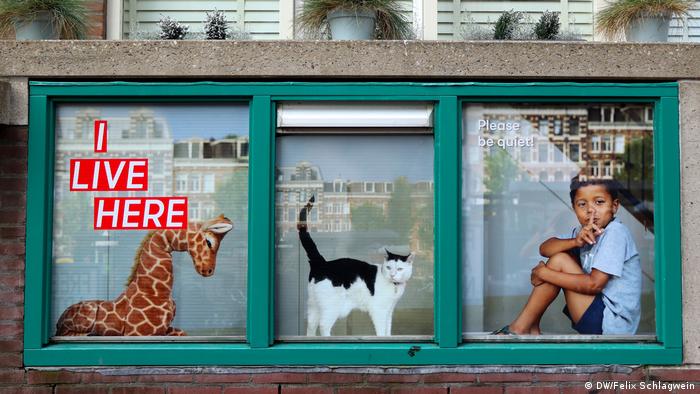 "Please be quiet! I live here."

And those tourists often behave badly, so the city has drastically raised the fines for minor offenses such as drinking alcohol and urinating in public. They must be paid on the spot — otherwise it's off to the police station.

To additionally sensitize the tourists  to the fact that Amsterdam's city center is not a party zone, locals, together with the city government, have brought the "I live here" initiative into being. On usually large murals, residents ask visitors to behave the way they would at home in their own neighborhoods.

The phenomenon of overtourism came as a surprise to Amsterdam. Only a few years ago, things were going badly for the city. It was still trying to cope with the fallout from the global financial crisis. Businesses moved away; tourists stayed away. With a worldwide publicity campaign the city marketing organization tried to make Amsterdam attractive again — with success. "We don't have to advertise anymore. Everyone knows Amsterdam. Now it's about improving the city's reputation," says Nico Mulder from Amsterdam Marketing. 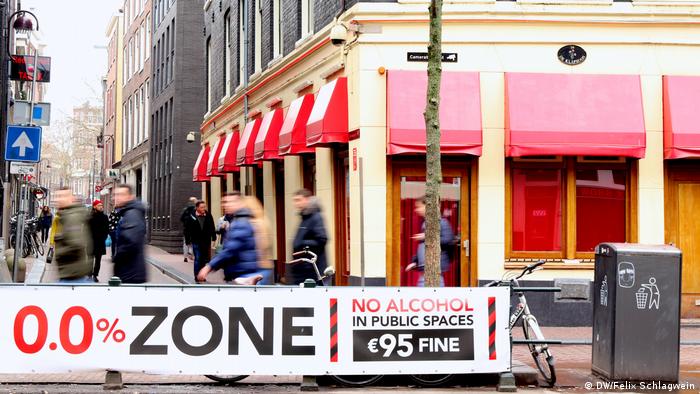 In the summer of 2018, the "Enjoy and Respect" campaign started. Its aim was to point out limits to tourists. "The red-light district and coffee shops also attract visitors who think everything is allowed in Amsterdam," says Mulder.

Internally they call the typical problem tourist "Liam." Liam comes from Britain, is between 18 and 24 years old and comes to Amsterdam spend a wild night or two. The "Enjoy and Respect" campaign is meant to call Liam's attention, before his trip, to the fact that he should behave himself in Amsterdam.

As soon as a potential tourist does a Google search for Amsterdam's wild attractions, the campaign shows up among the results. The campaign continues at the airport, on public transport and on posters in the city center. In addition, Amsterdam has put a digital fence around the zones that are especially hard hit. If "Liam" enters these zones, he'll be reminded on Facebook and Instagram to treat the city and its residents respectfully.

Amsterdam is not alone

Nico Mulder says that whether all these efforts will achieve the desired effect won't be known until the end of 2019 at the earliest, and that until then everything will be done to implement the current measures and exchange information with other European cities that have the same problem — Barcelona, Lisbon, Venice, Dubrovnik. Mulder emphasizes that the cities are also acting in concert in negotiations with companies such as Airbnb. 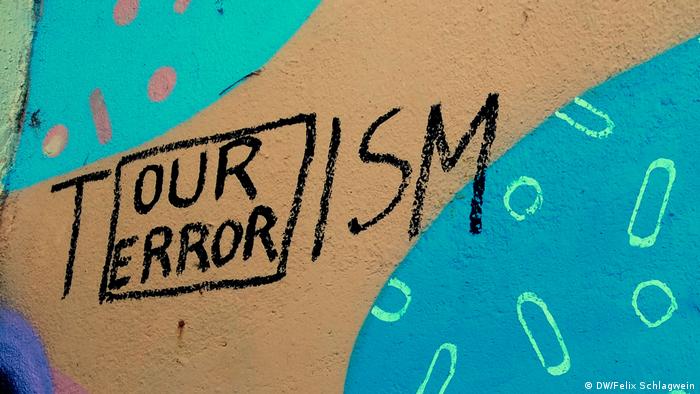 In Lisbon, locals are also taking a stand against mass tourism

In order to continue to cope with the increasing masses of tourists, Europe's trendiest cities are now relying on being able to direct tourists better so that, in addition to seeing the main attractions, they stay longer and explore other city districts and the surrounding countryside. The experts call this "spreading" and "crowd control." Amsterdam, Venice and other cities plan to risk this balancing act.

From May, millions of day trippers to Italy's ancient, lagoon city will have to pay an entry fee. The price is set to double in 2020 and be used to keep the ancient islands clean. (28.02.2019)

For a city which relies highly on tourism, Prague is facing the strain of its own beauty. Many consider it an overcrowded and overrated experience. DW's Eesha Kheny shares her Prague impressions. (26.10.2018)