UEFA will decide next month whether the Champions League and the Europa League will be played in front of fans. Leading German virologist Jonas Schmidt-Chanasit argues that filling stadiums so soon would be a mistake. 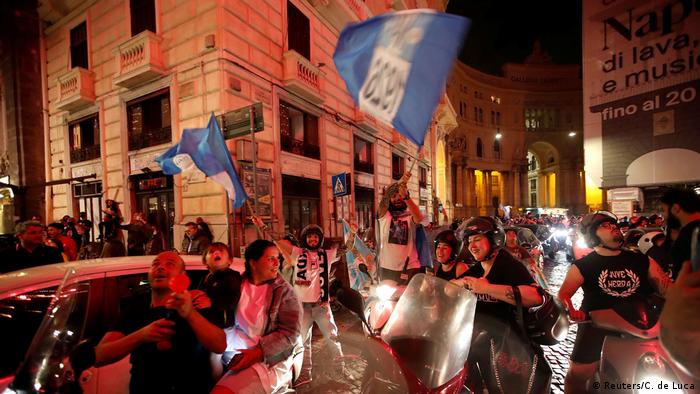 The images from the streets of Naples earlier this week would have been enough to jolt any virologist or health official. Thousands of Napoli fans poured out onto the streets of the southern Italian city to celebrate their side's victory over Juventus on penalties in the final of the Copa d'Italia.

They may not have been allowed to travel to the final in Rome, but at home in Naples and swept along by their emotions, they celebrated as if the coronavirus outbreak had never happened. No masks, no social distancing.  Never mind that the pandemic has already claimed 34,000 lives in Italy.

It's not only in Naples that fans are hoping not only to party together after their teams win trophies, but to return to attending matches. The German Football Association (DFB) even went as far as to apply to the local authorities in Berlin requesting permission for a total of 10,000 fans to be allowed into the Olympic Stadium for next month's German Cup final. The request was rejected. Due to the coronavirus outbreak, events involving more than 1,000 people are currently prohibited in the German capital.

Still, the football authorities are continuing to hold out hope that fans will be allowed to return to stadiums soon – and the clubs would welcome the ticket revenues they would bring with them. Alexander Ceferin, the president of UEFA, European football's governing body, is among those stoking such hopes.

"Things are changing very quickly at the moment. A month ago, I couldn't even say whether we'd be playing," Ceferin said on Wednesday as he unveiled the new summer timetable for the Champions League and Europa League.

The final rounds of the two competitions are to be held in Lisbon and the western German state of North Rhine-Westphalia. While the German state's premier, Armin Laschet, ruled out the possibility of playing in front of spectators this season, and Bayern  Munich CEO Karl-Heinz Rummenigge told German public broadcaster ZDF that the fans needed to be "a little patient,"UEFA has said it plans to "reassess" the situation at the start of July and decide a couple of weeks later whether fans will be allowed to return for the final rounds. However, the local health authorities in Portugal and Germany are bound to have the final say.

Jonas Schmidt-Chanasit, of the Bernhard Nocht Institute for Tropical Medicine in Hamburg, is one of Germany's leading virologists. He says it's understandable that with the number of infections dropping, some are pushing for things to open more quickly.

"And yet: We are still in a pandemic," Schmidt-Chanasit told DW. "We are still dealing with a virus for which there is neither a vaccine nor highly effective medication. Therefore, it is important that we remain cautious."

Just a few hundred spectators in the stands

In his view, any larger gathering of people brings with it an increased risk of infection – and sporting events such as football matches are a prime example.

"We know that the coronavirus spreads via droplets," Schmidt-Chanasit said. "When we sing, cheer, or shout, we discharge these droplets particularly strongly and over a greater distance. Other people can then inhale these droplets and become infected."

This is exactly what happened after a choir rehearsal in the United States and at a church service in Germany. People tend to be bunched even closer together at a football match, so can this really go well?

"I think football matches with spectators are quite possible," Schmidt-Chanasit said. But he immediately followed up this statement with a caveat: "Not with thousands, but rather with several hundred spectators. After all, [elite] football stadiums have an average capacity of around 45,000 seats. Such a crowd of people significantly increases the risk of infection in a pandemic." 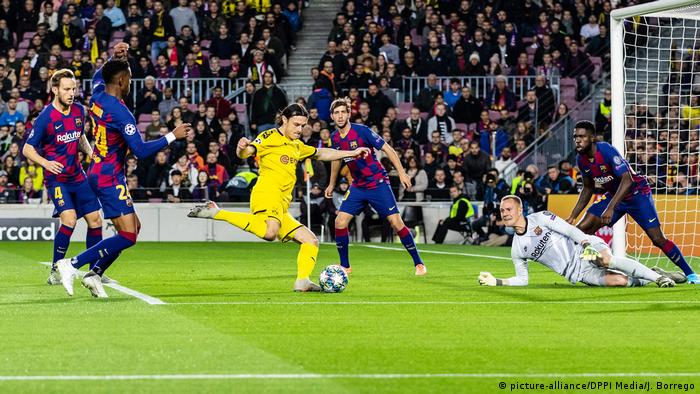 So how many does he think would be safe at this time? The answer will disappoint most football fans.

"With about 300 spectators in the stands, the risk of infection could be better controlled," said Schmidt-Chanasit, who is a fan of Union Berlin. He also doesn't dispute the fact that creating anything like a "normal" atmosphere is as good as impossible with such a small number of fans.

However, there was no shortage of atmosphere in Belgrade last week when as many as 25,000 spectators filed into the Stadion Partizana for the derby between Partizan and Red Star. It looked very much like any other Belgrade derby, complete with flares, chanting and singing.

Whether this experiment will result in a fresh outbreak in the Serbian capital remains to be seen, but unlike when the pandemic had just started, everyone must by now be aware of the role mass events like football matches can play in the spread of the coronavirus.

According to many experts, two Champions League matches – between Bergamo and Valencia as well as between Liverpool and Atletico Madrid – contributed to spikes in the number of cases in the regions where each of the teams is based.

And this is precisely what could happen again if thousands of spectators are allowed to attend matches in the summer. In Schmidt-Chanasit's view, there is also a danger from aerosols in the open air, which is why physical-distancing rules should still be observed and masks covering one's nose and mouth should be worn. Neither physical distancing nor getting everybody to wearing a mask seems realistic in a crowded stadium. But according to Schmidt-Chanasit, this would be the only way to avoid "the possibility of an infected individual infecting a large number of other people and triggering a so-called super-spreading event."

The world of football has been warned.

Bayern Munich sealed their eight title, but there was drama at the foot of the table as the battle to stay in the Bundesliga looks set to come down to the final day. Read all the latest updates from matchday 32. (17.06.2020)

As well as controversy, RB Leipzig's arrival in the Bundesliga raised hopes that a club could challenge Bayern Munich on the pitch and in the transfer market. Timo Werner's exit to Chelsea suggests that's not the case. (18.06.2020)