The latest migrant standoff in the Mediterranean has ended with 40 rescued at sea being transferred to Malta. The EU deal with Malta comes as another rescue ship with 123 migrants remains blocked from Italian waters. 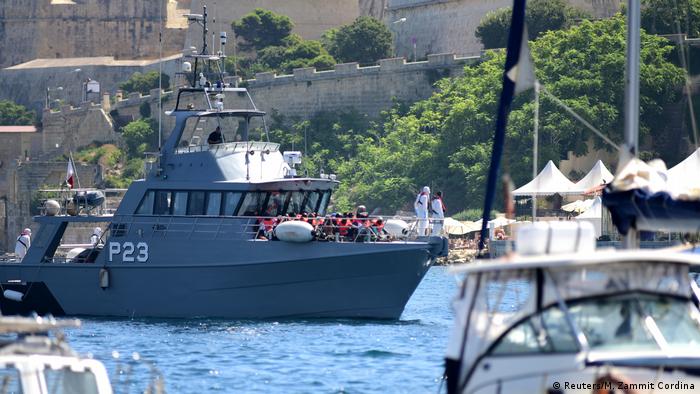 Forty migrants rescued by a German charity ship were transferred to Malta on Sunday and will be divided among EU member states under a deal negotiated by Germany.

Malta Prime Minister Joseph Muscat late Saturday said the migrants would be allowed to disembark onto Maltese military ships and then to port under a deal reached with the European Commission at the request of Germany.

"Malta will allow 40 migrants on board the German vessel Alan Kurdi to transfer to a Malta Armed Forces asset and enter port," Muscat said in a tweet. "No migrant will remain in Malta."

It was unclear which countries would take care of the migrants, but Germany, Portugal, France and Luxembourg have expressed willingness.

"They all nearly died. Now they are celebrating life. May they find open arms and hearts in their new home," Sea-Eye wrote in a tweet late Saturday.

The charity said it would immediately return to rescue migrants off the coast of Libya.

German Interior Minister Horst Seehofer said Malta "is sending an important signal of solidarity" ahead of a September EU meeting on the island to address migrant rescues in the Mediterranean.

Salvini, who is also Italy's deputy prime minister, has clashed with other EU states over his hard-line migrant policy and the repeated closure of the country's ports to rescue ships.

The weekend deal over the Alan Kurdi came as Open Arms, another rescue ship operated by a Spanish aid group, saved 123 migrants in the Mediterranean on Thursday and Friday.

The aid organization said Italy had blocked the ship from its territorial waters.

Germany has allowed thousands of people related to refugees with asylum status to join them. The government agreed to change the rules on family reunification for some refugees last year. (30.07.2019)

The United Nations has described the capsize of two boats carrying about 300 migrants as the "worst Mediterranean tragedy" in 2019. Survivors were rescued by fishing boats and returned to detention centers in Libya. (25.07.2019)

A German-flagged NGO rescue ship carrying 40 migrants has been given the all-clear to dock in Malta. The vessel Alan Kurdi set sail for the Mediterranean island group after being turned away by Italian authorities. (03.08.2019)