More than 100 migrants who were rescued at sea have been waiting months to be transferred to Germany, the German government says. Bureaucracy seems to be the main obstacle. One hundred and fifteen migrants who were rescued in the Mediterranean Sea have been waiting for months in Italy and Malta for Germany to take them in as promised, the German government has said.

The migrants needed to undergo a medical examination, be registered and attend interviews before they could be transferred to Germany, according to a statement made in response to an enquiry by German parliamentarians of the Left party. They also required checking by German intelligence services before the German federal refugee agency BAMF could arrange a transfer, the statement added.

It said some of the migrants were saved by two military ships on July 13 and taken to Sicily, and others rescued by the NGO ship Aquarius on August 10 and brought to Malta. Italy and Malta allowed them to disembark only after other EU member states had promised to take them in.

Ulla Jelpke, a spokeswoman for the Left's parliamentary party, commended Berlin for having pledged to take in the migrants, but called for quick action to fulfill the promise.

"There is no plausible reason for their entry to be put off because of bureaucratic measures," she said.

Several other EU states have already received the migrants they pledged to take.

NGO ship to return to operations

In another related development, the German NGO Sea-Watch said on Saturday that its vessel Sea-Watch 3 would return to migrant rescue operations after Malta allowed it to sail to Spain for maintenance work, having impounded it for three months.

Sea-Watch accused Malta of having acted "without any legal basis" and said more than 500 people had drowned at sea while the ship was being "illegally detained." 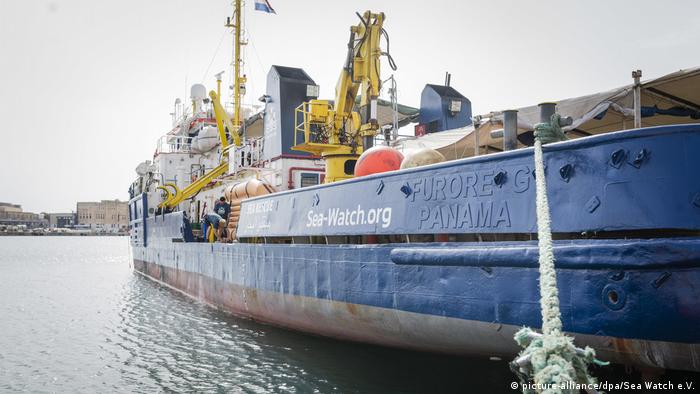 The Sea-Watch 3 was impounded for some three months

A number of NGO vessels had been patrolling the Mediterranean in the past months on the lookout for often overloaded boats carrying migrants who are making the crossing from Africa to Europe to seek refuge from violence and poverty in their native countries. However, a crackdown by several European countries, including Italy and Malta, has led to many of them suspending their operations.

Critics of such rescue operations say that they are encouraging migrants to set out on what is an often perilous sea journey, with thousands drowning while attempting the trip.

Aid agencies have, however, accused opponents of the ships of simply pursuing hard-line immigration policies and say that drownings have gone up in recent weeks because of the crackdown.