After spending days on the rescue ship Aquarius, a group of 58 migrants was transferred to a Maltese patrol boat and taken on the island. The charity-run ship is keeping out of port after losing its Panama registration. 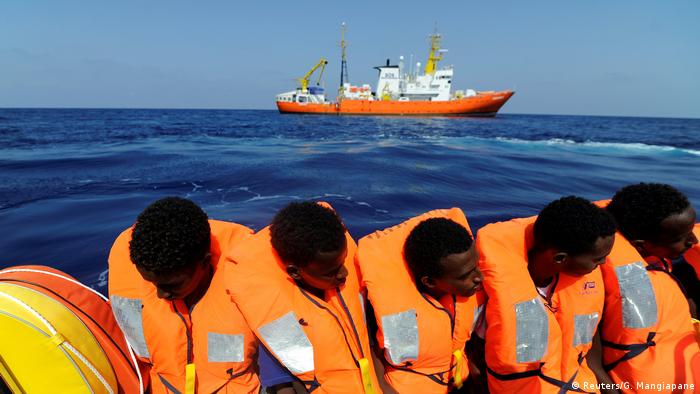 The authorities in Malta took in all 58 migrants from the unregistered rescue ship Aquarius on Sunday, after France, Germany, Portugal and Spain agreed to distribute the group among themselves earlier this week.

"All migrants who disembarked in Malta will be transferred to four other European countries in the coming days," the Maltese government said in a statement.

While the deal was struck on Tuesday, Aquarius' approach to Malta was delayed due to bed weather. The vessel, run SOS Mediterranee and Doctors Without Borders (MSF) also faced bureaucratic obstacles after Panama revoked its registration on Monday.Without a flag to sail under, Aquarius loses the right to exit any port after docking.

The charities slammed the move as the result of pressure by Rome to force them to end their activities in the Mediterranean. Aquarius is currently the only privately-run ship still running rescue missions along the popular trafficking route.

In order to get around the issue, the ship transferred the migrants to a Maltese patrol boat in international waters on Sunday, with the boat carrying them to port. The ship itself is set to return to its home port of Marseille to "deal with flag registration," Doctors Without Borders said on Sunday.

The group includes 18 children, 17 women, 23 men, and a dog, rescued at sea alongside its Libyan family. The UN's refugee agency UNHCR said it was still unclear which of the migrants would go to which country.

France, Germany, Portugal and Spain have said they will accept migrants aboard the Aquarius rescue ship under a deal described as a "European solution" by French Prime Minister Edouard Philippe.

His Cabinet colleague, Economy Minister Bruno Le Maire, had insisted that Malta handle disembarkation; under European rules, the ship was supposed to dock at the nearest port, in this case Malta.

France has said it will take in 18 migrants, while Germany and Spain will each welcome 15, a French government source told the news agency AFP on Tuesday.

Portugal said it will take 10 migrants, and added that it was still pushing for an "integrated, stable and definitive European solution."

The ship is the only privately run rescue vessel left operating amid a tightening legal stranglehold imposed by Mediterranean nations, including Italy's populist government, and coast guard units in Libya, where refugees typically venture onto the water.

So far this year at least 1,260 migrants have died trying to make the crossing, according to the International Organization for Migration. Attempted crossings since January have been estimated at 38,140, compared to 121,000 in 2017.

In a parallel development, some 400 asylum seekers arrived in Greece's main port of Piraeus earlier this week from the overcrowded Moria migrant camp on Lesbos.

The migrants, mainly from Syria, Afghanistan and African nations, were to be transferred to other camps and accommodation on the Greek mainland.

Charities had slammed conditions at Moria, citing cases of sexual attacks, deplorable sanitation and an increase in suicide attempts among camp residents.

Asylum rules unified across the EU have been proposed by the European Commission. The system would deter "asylum shopping." A "common" policy was a stated aim of the bloc's 2009 Lisbon Treaty but was never implemented. (13.07.2016)

The French government has said it will not allow the Aquarius 2 migrant rescue ship to dock in Marseille. The ship has been repeatedly turned away by Italy and forced to stop in Malta and Spain in recent months. (25.09.2018)

Though some countries in the EU have decriminalized cannabis, the island nation is the first to legalize recreational use and cultivation for adults. Germany and Luxembourg are expected to follow suit early next year.