Panama authorities have begun procedures to revoke the registration of the Aquarius 2, the last migrant rescue ship operating in the central Mediterranean. Charities say the Italian government is to blame for the move. 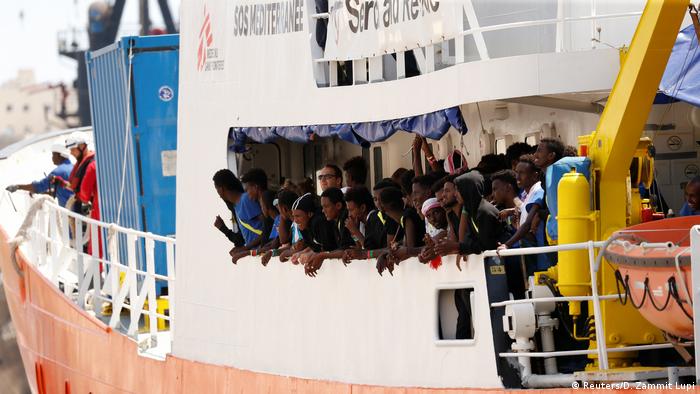 The Aquarius 2 migrant rescue ship, the last of its kind operating on the central Mediterranean trafficking route, was told by the Panama Maritime Authority (PMA) on Sunday that it will have its registration revoked.

The move effectively ends all charity-run rescue missions off the Libyan coast unless the ship can find a new flag to sail under.

The vessel is currently at sea with 58 survivors on board and will be deflagged as soon as it comes into port. It remains unclear where it intends to sail next.

Nick Romaniuk, Search and Rescue Coordinator of the rescue ship Aquarius, in an interview with DW

SOS Mediterranee, one of the humanitarian charities operating the Aquarius 2, said in a statement it was reeling from the move and accused Panama of bowing to pressure from the Italian government.

"On Saturday ... the Aquarius team was shocked to learn of an official communication from the Panamanian authorities stating that the Italian authorities had urged the PMA to take 'immediate action' against the Aquarius," it said.

SOS Mediterranee, along with fellow operators Doctors Without Borders, has called on European governments to either urge the Panamanian authorities to reinstate the vessel's registration or to immediately issue a new flag.

The PMA said it was acting after the "principal complaint came from Italian authorities" about the ship captain's supposedly illegal refusal to cooperate with the Libyan coast guard and return the rescued migrants to Libya. However, the UN's refugee agency found that Libya cannot be a considered a safe harbor. The country remains largely lawless amid a recent surge of infighting between militia groups.

Salvini has led a populist crackdown against migrants since his League party joined the anti-establishment 5-Star Movement in office last June. He has accused humanitarian charities of operating a "taxi service" for migrants crossing the Mediterranean.

He also has a track record of refusing to let humanitarian ships with migrants rescued at sea dock in Italy.

Rome's crackdown on migrant rescue boats has seen the waters separating Spain and Africa become one of the main migrant crossings into Europe.

French President Emmanuel Macron picked up the gauntlet thrown down by Viktor Orban and Matteo Salvini. He's right to do so since strength is the right, and only, response to right-wing populists, says DW's Max Hofmann. (30.08.2018)