Far-right "Combat 18" militants have managed to set up structures in several German states despite a nationwide ban, German media have reported. Still, authorities do not see grounds to launch an investigation. 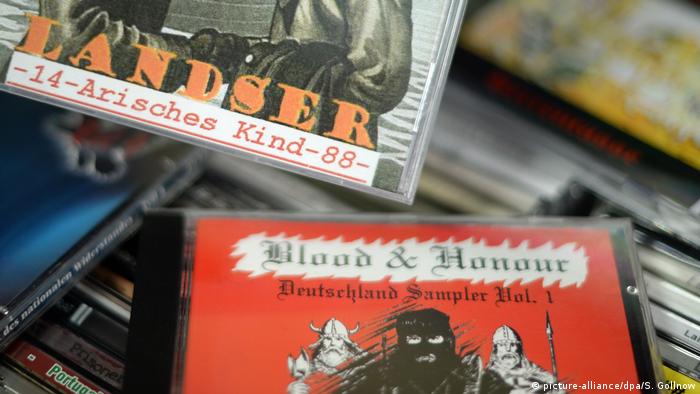 A German court ruled on Thursday that far-right organizations may use banned Nazi slogans if they are in a foreign language, overturning an earlier decision. (14.08.2009)

A psychiatrist has presented the first part of his assessment of alleged NSU member Zschäpe, finding her mentally sound. The report also marks the beginning of the end for the yearslong case that scandalized Germany. (18.01.2017)

German officials have had hundreds of reports of the militant, far-right group's activity in recent years, according to an investigative media report published on Friday by the daily "Süddeutsche Zeitung" and the public broadcaster NDR.

Berlin banned "Combat 18" in 2000, while also banning its mother organization "Blood & Honour," the neo-Nazi association active all over Europe.

While "Blood & Honour" mostly deals with propaganda, notably setting up extremist-themed concerts and producing and disseminating audio material, "Combat 18" represents the armed wing of the movement and has conducted attacks on political opponents, migrants and journalists across the continent. The militia was first established in the UK in 1992. The "18" in the group's name stands for Adolf Hitler, corresponding to the numerical position of the letters "A" and "H" in the alphabet.

The group also recommends using small, "leaderless" cells to conduct the attacks. The same strategy has been successfully used by the National Socialist Underground terrorists in Germany, but investigators found no link between the two neo-Nazi factions.

According to the reports, "Combat 18" has managed to reactivate in Germany over the last four years. Officials believe that the organization has established structures in at least seven out of Germany's 16 states. The exact number of the groups' members in the country remains unknown. The organization is believed to have been sending funds to other European countries, including Hungary, in order to support the local far-right movement across Europe.

Authorities compiled a file on the group in response to a late-October inquiry by members of the opposition Left party. Several weeks later, the police raided a far-right gathering in the central state of Thuringia, reportedly arresting four members of the "Blood & Honour Südthüringen" organization.

Federal security services and prosecutors keep the group's activities under observation, according to the report. At the same time, the prosecutors' office sees no grounds to start an investigation on the issue.

"Unlike the federal government, anti-fascist scholars have been stressing the central role of the ['Combat 18'] for years" Linke lawmaker Martina Renner told NDR. "Also, the informants who worked with the police on 'Blood & Honour' are asking: Why is there no significant pressure to investigate ever since the group has been banned?'"

Earlier this week, German authorities raised multiple locations to flush out "Reichsbürger," members of yet another far-right movement.