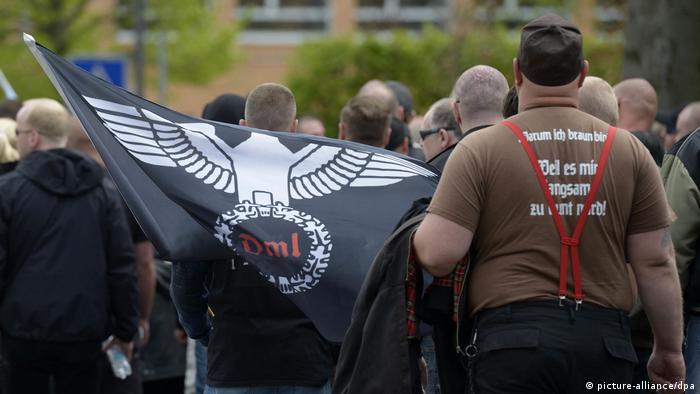 Some 200 police officers were deployed across Germany early Wednesday to carry out raids at 12 apartments and other property believed to belong to right-wing extremists. Members of the so-called "Reichsbürger" movement are suspected of having formed a terrorist organization that police say has procured arms and ammunition.

"The goal of today's search measures was to obtain further evidence of the actual creation of a formal group, as well as the alleged planned criminal acts and any potential tools," state prosecutors said in a statement.

The 12 raids on Wednesday targeted six suspects accused of planning attacks on police officers, asylum seekers and Jewish people. A seventh is said to have supported the group through "procurement procedures."

The suspects were largely connected via social media and were believed to have begun planning armed attacks in spring 2016. Investigators have so far found no evidence pointing to concrete terror attacks.

The operation on Wednesday took place across the states of Baden-Württemberg, Berlin, Brandenburg, Lower Saxony, Rhineland-Palatinate and Saxony-Anhalt.

'Citizens of the Reich'

The "Reichsbürger" group - which translates as "Reich citizens" - is a loose group united by their refusal to recognize the authority of the German state. Members assert that the German Reich continues to exist in its 1937 pre-Second World War borders, despite the defeat of Nazi Germany in 1945.

"Reichsbürger" followers sometimes refuse to pay taxes or fines, with some even using homemade identification cards and registration plates. One member previously proclaimed himself king, while others print their own currency.

Prosecutors are probing a policeman with suspected links to the far-right "Reichsbürger" group. He's accused of failing to prevent a fellow officer's death by withholding information about a dangerous member. (23.01.2017)

Following a rise in prominence of the anti-government 'Reichsbürger' movement and the death of a police officer in October, Germany's intelligence agency is believed to be tightening surveillance on the group. (19.11.2016)

The movement currently boasts an estimated 4,500 supporters across Germany, according to information from German state interior ministers and domestic intelligence services. Several individual states have already been surveying the "Reichsbürger," but each state handles the movement differently.

Authorities did not provide details of any arrests, but public broadcaster SWR, citing anonymous security sources, reported that a Reichsbürger calling himself a "druid" was arrested, and that firearms and ammunition were found in his home in Schwetzingen, Baden-Württemberg.

The 65-year-old, named as Burghard B, alias "Druid Burgos von Buchonia," has called for the persecution of Jews and Muslims on a profile he keeps on the Russia social media network VK: "My self-preservation instinct tells me that I must destroy Jews and Muslims, before they destroy my tribe or my family," he wrote.

"Die Welt" newspaper reported he was suspected of founding an armed cell callings itself the "Celtic Druids," which state prosecutors had been investigating since August 2016.

Germany's pagan druid scene has long since disavowed him, but the man was identified as an anti-Semite and a Reichsbürger by leftist anti-fascist media outlet "Indymedia" in 2013. Burghard B also posted a meme on his Facebook profile on August 5, 2016, bearing the slogan "An anti-Semite is someone who won't allow himself to be banned from thinking." A banner over his profile picture reads: "Careful: According to the 'FRG [Federal Republic of Germany] authorities' I'm an 'endangerer'!"

The Reichsbürger movement made international headlines in October after a policeman was fatally shot by a member in Bavaria. Earlier this week, prosecutors in Nuremberg launched an investigation into one of the deceased officer's colleagues who is suspected of having links to the radical group.

The prosecution alleges that the 50-year-old official knew of the dangers posed by the group and could have prevented his colleague's killing.