Police suspect two men detained over storing 155 kilos (342 pounds) of explosives of being linked to the far right. One man has admitted attending a meeting of a recently formed group of right-wing extremists. 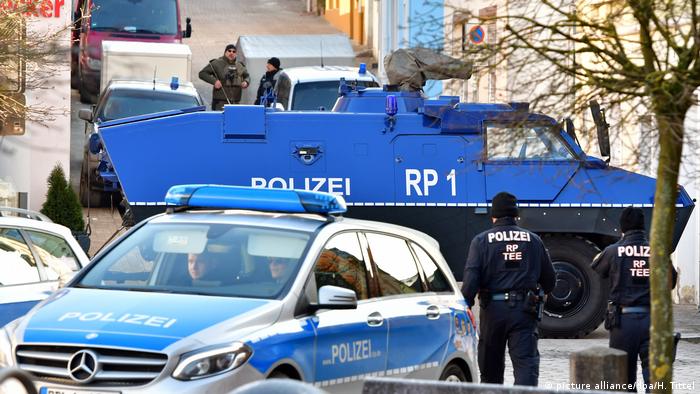 The prosecutor's office in the western German state of Rhineland-Palatinate is investigating whether two men arrested last month for storing large amounts of explosives were members of the Old School Society (OSS), a right-wing terror group suspected of planning attacks on refugee centers and mosques, the magazine "Spiegel" reported on Saturday.

The pair - a man aged 18 from Lauterecken and another aged 24 from Mettmann near Düsseldorf - were detained on December 29.

German police are hunting for hundreds of neo-Nazis. The Interior Ministry says there was a significant jump in outstanding arrest warrants in 2016. Experts believe that right-wing terrorist networks pose a threat. (09.01.2017)

Several have been arrested after a group of neo-Nazis illegally occupied a church tower in Dortmund, shouting anti-foreigner slogans. Church leaders have slammed the group, saying "there is no room for racism here." (17.12.2016)

Police in Saxony have raided 19 locations associated with the far-right "Freie Kameradschaft Dresden" group. The group is suspected of committing a number of attacks targeting refugees and political opponents. (30.11.2016)

More than a week later, almost 90 people had to be evacuated from a neighborhood of Lauterecken over safety concerns, as police removed the large cache of home-made explosives from one of the suspect's houses.

"Spiegel" said that during a police interrogation, the younger man had admitted attending an OSS meeting last summer in Rhineland-Palatinate.

He said one of the attendees had vaguely discussed carrying out an attack, asking if anyone could produce a large amount of explosives for him.

The pair told investigators the explosives were obtained to make fireworks for a private New Year's Eve party.

One of the bombs found in the flat was emblazoned with a swastika and symbol of the Nazi SS, police said.

The younger suspect had posed for photos on social media wearing T-shirts emblazoned with right-wing logos. His alleged accomplice had been reported to police previously over violations of the Explosives Act and for having right-wing literature on him.