The Christian Democratic Union has explored campaigning on a platform of security amid surging support for the populist AfD party, according to "Bild." Tax relief and traditional family structures are also on the table. 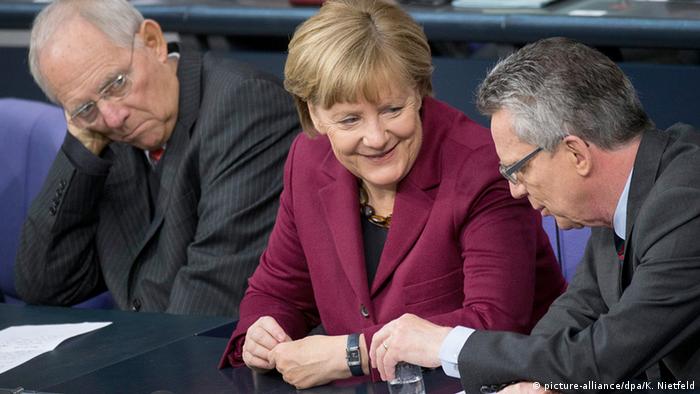 The Berlin-based newspaper "Bild" on Friday reported that German Chancellor Angela Merkel's Christian Democratic Union (CDU) will likely emphasize tax cuts, homeland security and the family for its campaign platform ahead of the 2017 federal elections.

Ahead of Germany's federal election in 2017, a new poll shows that two-thirds of Germans oppose a fourth term for Chancellor Angela Merkel.

German Finance Minister Wolfgang Schäuble is prepping a tax relief program for 2018 that would lower taxes on small and medium-range incomes, "Bild" reported, citing sources in the party's inner circles. He is also working on ways to apply a reduction to the solidarity tax.

"The Union is committed to tax relief for small and medium incomes," said Eckhardt Rehberg, the budgetary spokesperson for the CDU's parliament group, according to "Bild."

"We want to take further steps in the reduction of bracket creep and tax relief for families," Rehberg added, referring to the impact of Germany's progressive income tax structure.

Merkel's conservative party also wants to increase staff in the federal police and intelligence services in a bid to challenge the populist Alternative for Germany's (AfD) security-oriented platform.

According to the Berlin-based paper, the CDU and its Bavarian sister party, the Christian Social Union (CSU), are expected to review the proposed strategies in June.

The report comes as the polling company Insa published its findings, showing that only 36 percent of respondents said they wanted Merkel and the CDU to lead the government in the 2017 federal elections.

The German chancellor has come under scrutiny for her open-door policy towards people fleeing war in Syria and elsewhere.