Remains of 1,200 Holocaust victims laid to rest in Belarus

The remains of 1,200 Holocaust victims were buried after being unearthed earlier this year. Jewish community leaders criticized Belarusian authorities' decision to continue a building project at the mass grave site. 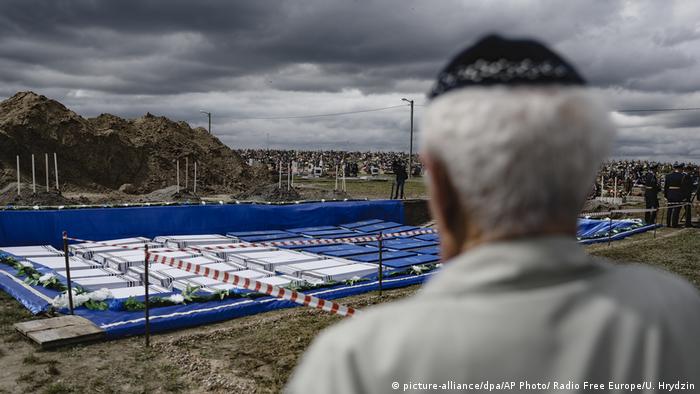 The remains of more than 1,200 Jewish Holocaust victims were reburied in Brest, a city at the Belarusian-Polish border, on Wednesday after builders discovered a Nazi-era mass grave beneath a construction site.

The victims were laid to rest in 120 blue caskets adorned with the Star of David, laid side-by-side and two-deep in an expansive grave at a city cemetery.

Read more: Belarus: An unknown story of the Holocaust brings forgotten camp 'back into Europe's conscience'

The mass grave was discovered in January of this year when builders were laying the foundations for a luxury housing development. Soldiers were called into the city center of Brest — which was part of Poland before the war — to exhume the bones of 1,214 people who were killed during the Nazi occupation of what was a Jewish ghetto from 1941 to 1942.

To the chagrin of some community leaders, local officials decided against canceling the building permit for the site where the remains of other victims might yet be uncovered. 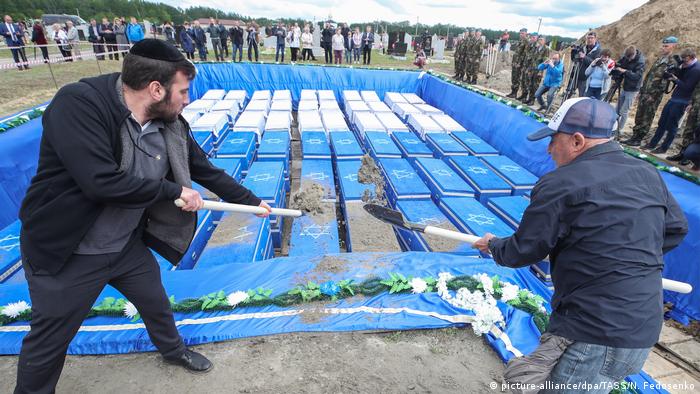 Roughly 300 people attended the funeral ceremony, which was led by a local rabbi, including Israel's ambassador in Belarus, diplomats, and community members. Mourners were given the opportunity to toss earth onto the caskets before the pit was filled in.

"The soul goes up to heaven through this process, so it was very important for the Jewish community that it was all done with Jewish custom,” said Israel's ambassador in Belarus, Alon Shoham.

Read more: Anti-Semitism lives on in Belarus, despite small number of Jews

Belarus was home to a dynamic Jewish community prior to the Second World War. During the war, Nazi Germany occupied Belarus, which was then part of the Soviet Union. An estimated 28,000 people were confined to the Jewish ghetto in Brest until it was destroyed in 1942 when 17,000 people were led out of the city and executed. The fate of the others is unknown. 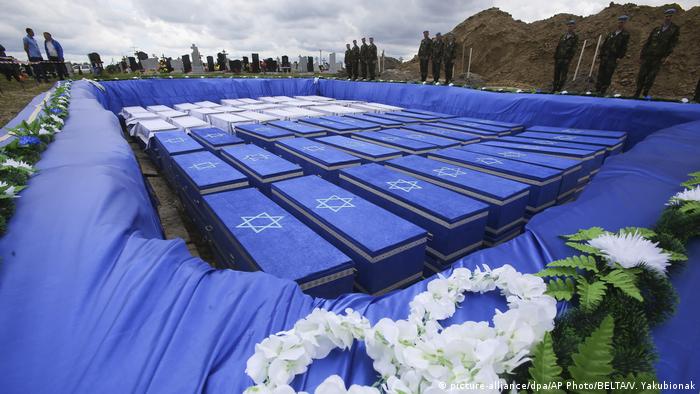 The coffins were laid side-by-side and two-deep

Some of the skulls were found with bullet holes, indicating that victims had been shot in the back of the head. Personal effects, such as leather shoes, were also found by soldiers.

The head of the local Jewish community Brisk, Regina Simonenko, criticized authorities for hurrying to continue the construction project rather than running DNA tests for victims. "We were told that DNA tests are expensive and take a long time,” she said.

The World Jewish Congress denounced the housing development as "an affront to the memories of the Jewish residents of the city who were shot and murdered in cold blood at that very site.”

Belarus: Living on a mass grave?

Belarus: Living on a mass grave?

Poland's ruling party and a veterans' association have demanded that Polish victims of Auschwitz be better commemorated. They say non-Jewish victims are ignored due to the main focus on remembering the Holocaust. (27.01.2019)