Refugees in Budapest hoping for trains to Germany | Europe| News and current affairs from around the continent | DW | 03.09.2015

Refugees in Budapest hoping for trains to Germany

Police in Hungary are once again letting refugees board trains at the station in Budapest. But the trains heading out of the country are making unplanned stops before reaching the border. Max Hofmann reports. 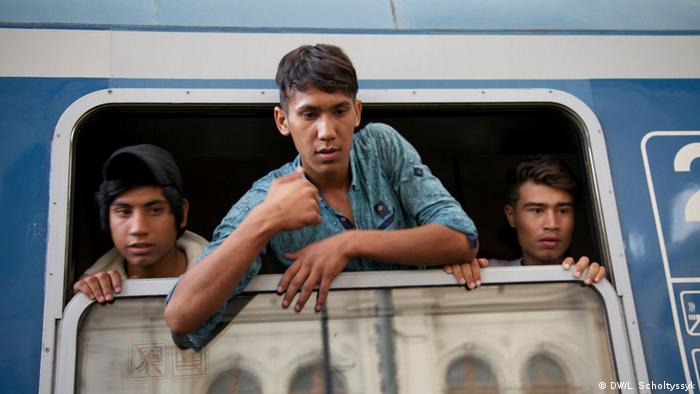 The pressure is off, at least for a little while. The tense atmosphere surrounding Budapest's main train station on Wednesday evening has given way to careful optimism, after police began allowing refugees into the station again on Thursday morning.

At first though, most of the refugees were confused by the destinations on the board. Names like Sopron don't mean anything to them; they're looking for destinations such as Vienna or Munich. But under those cities comes the sentence: "All international connections have been canceled."

Despite this, a train on platform eight is crammed full, with people pushing into the aisles to fill every last bit of space. Many hope the train will take them where they want to go, because there are few phrases in German on the locomotive. The train is actually heading to Hungary's western border, and the city of Sopron. From there, it's only a few kilometers to Austria. It's at least going in the right direction, but despite this, many jump off at the last minute. They sense that something is up, and opt to wait for a train going directly to Germany, out of the now widely hated Hungary. 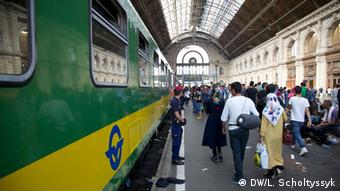 Trains left Budapest toward Austria but stopped before the border

Sharifi is sitting with his family on the floor of the station. In his right arm, he holds his one-year-old daughter; with his left hand, he eats a meal of chicken and chips. The refugee from Afghanistan says it's his first proper meal in two days.

"Under the Taliban, the situation in Afghanistan was still more or less stable, but now with Islamic State…" he trails off, shaking his head. "We just couldn't take it anymore." He, too, is dreaming of Germany. After the last few unbearable days at the hands of the authorities in Budapest, it's become even more of a paradise in the minds of refugees here.

"There are lots of great people here among us," Sharifi says between bites. "Doctors, mechanics, all kinds of people. Please, Germany, let us in!" When asked why he didn't board the train for Sopron, he waves his hand. "We heard that the authorities plan to redirect the train to a camp outside of Budapest." A Hungarian woman standing nearby shakes her head. "Impossible," she says. "The Hungarian government is bad, but even they wouldn't do something like that." 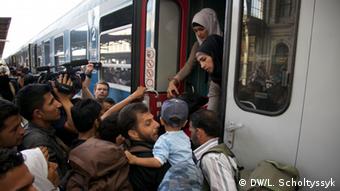 The trains were packed with refugees

The families with children are more careful than young people traveling on their own. They want more information, or a call from someone who managed to cross the border near Sopron. The smugglers who reacted to the new situation by organizing taxis and buses to drive refugees out of Budapest will also find a way to carry on their business in Sopron - if the trains leaving Budapest actually arrive at the border.

Back and forth by the government

Many suspect a master plan behind the Hungarian government's back and forth. It announced plans to build more transit camps near the Serbian border. At the same time, it promised a refugee camp next to the train station in Budapest with room for 1,000 people. But there are already more than 3,000 living in inhumane conditions in the station's passageways. The refugees have become mistrustful of information they get from the Hungarian police and other authorities.

At around midday on Thursday, it became clear that they were right not to trust the information about the train supposedly heading to Sopron.

A Reuters reporter who was aboard the train confirmed that the police stopped it outside the capital and evacuated the refugees, directing them to a registration camp in Bicske. Many resisted, some even fled. Sharifi is not surprised. "See, what did I tell you?" he says.

He grabs his daughter and runs out of the station. "It's too dangerous here now," he says, looking back over his shoulder at the police officers with the red berets. The rest of the family is sitting next to a tent in front of the station. Now, they just have to wait for the train to Germany that they're all talking about. Some even believe the chancellor herself will send it to pick them up.

Hungary's prime minister told a press conference that Europeans fear the onslaught of refugees, Austrians disagree. They do agree, though, that politicians have failed to lead, reports Alison Langley from Vienna. (03.09.2015)

There were protests at a train station in the Hungarian town of Bicske when police in riot gear obliged migrants to get off a west-bound train. Passengers refused to be taken to a Hungarian migrant-reception center. (03.09.2015)

Hungary's PM has railed against the EU over its handling of an unprecedented wave of migrants trying to enter the bloc. Viktor Orban also said the crisis was not a European but rather "a German problem." (03.09.2015)