Britain's departure from the EU is a "priority" for the government, Queen Elizabeth II said as she opened parliament. UK Prime Minister Boris Johnson has been accused of politicizing the role of monarch. 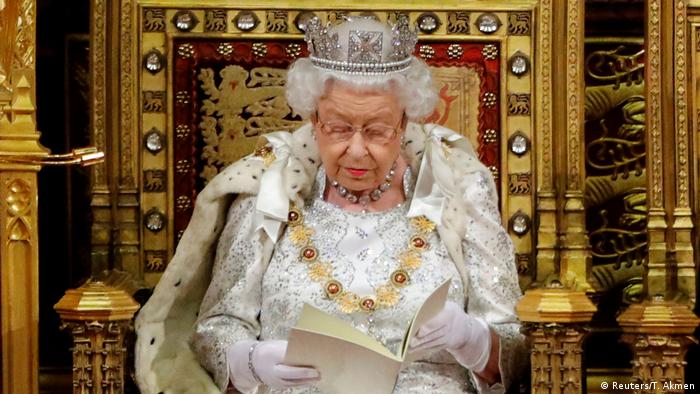 Amid a heady mix of pomp and politics, Britain's Queen Elizabeth II gave a speech to reopen Parliament on Monday, outlining her government's plans for the year ahead.

Seated on a golden throne, the monarch read a list of UK Prime Minister Boris Johnson's plans for Brexit, as well as domestic issues that have largely gone ignored since the UK's vote to leave the European Union in 2016.

Read more: Queen Elizabeth to be evacuated in case of Brexit riots

Leaving the European Union on October 31 was a "priority" for the government, the queen said.

Opponents of Johnson and his Conservative government claim the address — the 65th Queen's Speech — is unnecessary because the prime minister lacks a majority to deliver its aims. As a result, Johnson is unlikely to be able to implement any of the plans without calling a general election in the coming months.

"What we have got in effect is a party-political broadcast from the steps of the throne," opposition Labour Party leader Jeremy Corbyn said Sunday.

The exact wording of the speech was reported to have been requested far earlier in advance than usual by Buckingham Palace. Critics of Johnson accuse him of trying to mislead the monarch when he asked her to prorogue parliament ahead of Britain's exit from the EU.

The address was delivered at the same time Brexit negotiators met to further thrash out details that would allow Britain to leave the EU with a deal at the end of the month. The key issue remains that of the border between the Irish Republic, which will remain part of the EU, and Northern Ireland, which is part of the UK.

Negotiations got underway with renewed vigor last week, when Johnson and Irish Prime Minister Leo Varadkar said they could see a "pathway" to a divorce agreement that avoided a no-deal Brexit.

Even if a Brexit deal is agreed at the summit, it would need both the British and European parliaments to approve the terms. Johnson's predecessor Theresa May sought approval for her Brexit deal by parliament on three separate occasions, but each time failed.

European affairs ministers are set to meet on Tuesday, when they'll receive an update on proceedings from EU negotiator Michel Barnier.

On Wednesday, France and Germany hold their annual summit in which Brexit looks certain to feature. If any deal is to be struck, it will need the blessing of the EU's two most powerful members ahead of a full summit of EU government leaders on Thursday and Friday.

Before the meeting between Varadkar and Johnson last week, Merkel was reported to have said she believed a Brexit deal was "overwhelmingly unlikely."

Another brick in the wall? The downside of Britain's jobs boom

Unemployment in the UK is at its lowest level since the 1970s, but the country also has the weakest wage growth for 200 years. With the parties competing to offer a higher basic wage, how did this situation come about? (04.10.2019)