EU Brexit negotiator Michel Barnier and UK Stephen Barclay will "intensify" negotiations after getting the go-ahead from the remaining 27 member states. The EU Commission will assess their progress on Monday. 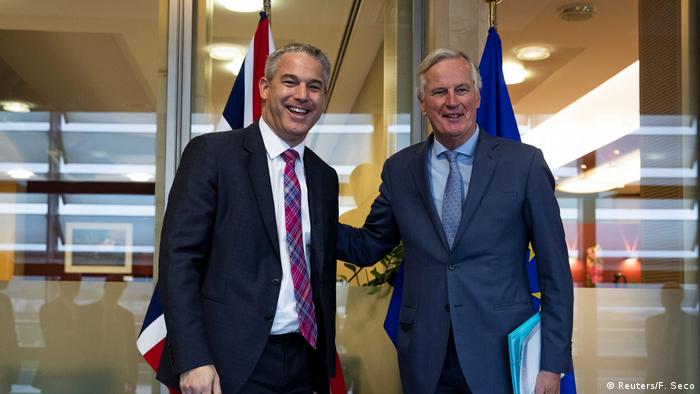 The European Union and Britain will step up Brexit discussions over the coming days, following a breakthrough in talks between top EU and UK negotiators on Friday.

Following the briefing, representatives from the 27 member states gave Barnier the green light to “intensify” talks.

"The EU's position remains the same," the EU Commission said in a statement after the breakthrough was announced.

It noted that any deal must contain a "legally operative solution" that avoids a hard border on the island of Ireland while protecting the island's economy, the Good Friday peace accord and the EU's single market. The Commission added it will take stock of progress on Monday.

The green light for renewed, intensified discussions from EU member states came after a "constructive" meeting on Friday with Barnier and his British counterpart Stephen Barclay.

The pair are attempting to strike a deal before the proposed Brexit date of October 31.

Barnier cautioned the public to "be patient" after the meeting with his British counterpart, later briefing the 27 EU member states on the talks.

"Brexit is like climbing a mountain. We need vigilance, determination and patience" said Barnier.

"We are working towards a deal," said Mina Andreeva, spokeswoman for the European Commission. "If there is a will, there is a way."

The meeting on Friday appears to signify a change of tone in Brexit negotiations, which had reached an impasse, mainly over the Irish backstop agreement.

Tusk: 'Time is practically up'

European Council chief Donald Tusk on Friday also said that he has "received promising signals" from Irish Prime Minister Leo Varadkar that a Brexit deal is still possible and he has extended a deadline to continue talks with the UK.

"Today the hope is maybe a little bit bigger and more tangible than two or three days ago," he said to reporters in Cyprus. "But you can never be sure in politics, sometimes the positive signs are only political tricks."

"A no-deal Brexit will never be the choice of the EU," he said, before adding "there is no guarantee of success and the time is practically up."