The German leader reportedly called the possibility of the EU agreeing to Boris Johnson's Brexit deal "overwhelmingly unlikely." The European Council president, meanwhile, has accused the UK PM of playing a "blame game." 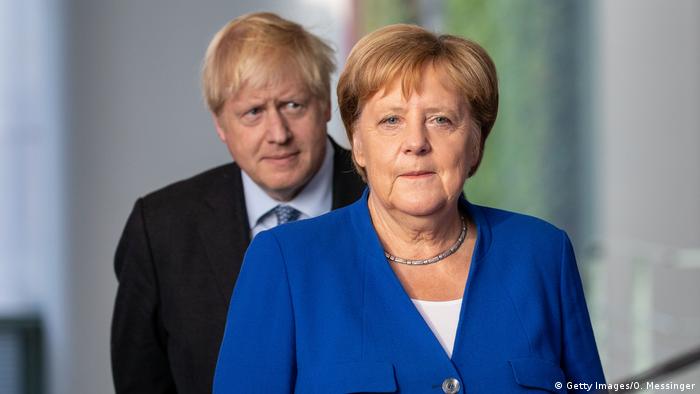 German Chancellor Angela Merkel described the likelihood of the European Union ratifying British Prime Minister Boris Johnson's Brexit deal as "overwhelmingly unlikely" in a call between the two leaders on Tuesday morning, according to a Downing Street source.

Downing Street has neither confirmed nor denied the Johnson-Merkel call. The German chancellor's office admitted the call took place; however, it did not provide details about it.

Merkel reportedly said for a deal to be agreed upon, Northern Ireland would have to stay in the EU customs union forever, which Johnson is not prepared to agree to.

The president of the European Council, Donald Tusk, meanwhile, accused Johnson of not taking the negotiations seriously enough and playing "some stupid blame game."

The news comes following the publication of remarks from an anonymous government source claiming that Johnson will do "all sorts of things" to prevent a further delay to Brexit.

According to the source, quoted in the British Spectator magazine, Johnson does not want a no-deal Brexit, but he believes that negotiations with the EU are failing, following frosty responses from Brussels on Monday to his proposed withdrawal deal.

"If this deal dies in the next few days, then it won't be revived," the source said.

Both Merkel's comments and this source indicate that this week may mark the final chance for the UK and the EU to agree a withdrawal deal.

Downing Street has neither confirmed nor denied the source's remarks.

The British government is due to publish a plan for a potential no-deal Brexit later on Tuesday.

A Scottish court was told last week that Johnson would agree to comply with the law and send a letter requesting a Brexit extension to the EU if no deal is agreed upon.

It remains unclear what "sorts of things" Johnson will do to implement a no-deal Brexit. According to legislation passed in Parliament shortly before Johnson suspended it, he is legally required to ask for a minimum three-month extension from October 31 if no deal has been agreed by October 19.

Johnson has repeatedly said that he will do his best to flout the so-called "Benn Act," named for Labour MP Hillary Benn, despite critics' claims that such a move would be unlawful.

On Monday, the European Commission described Johnson's latest proposals, unveiled last Wednesday, as "untried and revocable," saying "we all agree we need a workable solution."

Meanwhile, Merkel is meeting European Parliament President David Sassoli and President of the European Council Donald Tusk in Berlin on Tuesday to discuss the ongoing negotiations. Sassoli will meet Johnson on Tuesday evening.

Britain's highest court has ruled that Prime Minister Boris Johnson's decision to suspend Parliament was unlawful. John Bercow, the speaker of the House of Commons, said Parliament must "reconvene without delay." (24.09.2019)