Boris Johnson's government has told a Scottish court it would send a letter asking for a Brexit delay in certain circumstances. The case is seeking to judge if legislation designed to prevent a no-deal Brexit is binding. 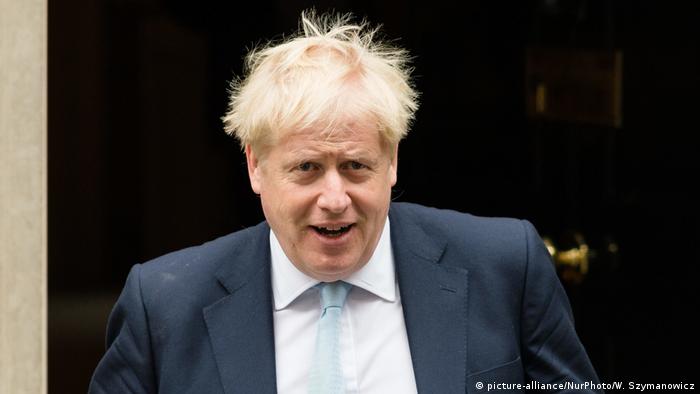 British Prime Minister Boris Johnson "will send a letter in the form set out" in a law passed last month designed to prevent a no-deal Brexit on October 31, his government told a Scottish court on Friday, according to one of the lawyers involved in the case.

The law, dubbed the "Benn Act" after Labour MP Hilary Benn, calls on the prime minister to send a letter to the European Council requesting an extension of at least three months from the current October 31 Brexit deadline, unless a deal is reached between the UK and EU at October's upcoming EU leaders' summit.

In the papers, which were submitted to a Scottish court, the government said that Johnson accepted that he was "obliged" to send a letter to the EU asking for a delay if no deal was reached. It also acknowledged that the government would have to agree to that extension in the event that Brussels approved one.

Jo Maugham, one of the lawyers involved in the case, tweeted what he said was a section of the government's documents that were submitted to the court:

Anti-Brexit campaigners Maugham, Dale Vince and Joanna Cherry launched the case in Scottish courts, calling on the court to rule on the extent to which Johnson is bound by the legislation.

Johnson has previously said that he would rather be "dead in a ditch" than ask for an extension, adamant that he will take the UK out of the EU with or without a deal by the October deadline.

Until Friday, his government ministers had repeatedly answered questions about whether he would request a Brexit extension only by saying that the government "will comply with the law," prompting speculation that Downing Street might have had a plan to circumvent or nullify the Benn Act.

The segment of the text released by Maugham made no mention of what other steps the government might take in such a scenario.

Downing Street also appeared to make clear that although the government would comply with the Benn Act to request an extension, it would try to avoid a delay by other means.

"The govt is not prevented by [the Benn Act] from doing other things that cause no delay, including other communications, private and public," a source in the prime minister's office told the BBC's political editor Laura Kuenssberg.

This communication from Downing Street, made while the case was ongoing, subsequently wound up being read out in the courtroom by Maugham. Maugham quipped that Johnson's senior adviser Dominic Cummings, or whoever the source may have been, was not helping their own government's case.

"We are just reading this passage to the Court. It looks very underwhelmed. Feels like Cummings (assuming it is he) is batting for us today," Maugham wrote.

Later on Friday, Johnson issued a tweet simply saying: "New deal or no deal — but no delay. #GetBrexitDone #LeaveOct31."

The news came as Britain's Brexit negotiator David Frost was in Brussels for technical talks on securing a new divorce agreement.

Johnson submitted new proposals to the EU on Wednesday in a bid to break the Brexit deadlock, but his suggestions encountered resistance from some EU leaders.

Some have particularly taken issue with Johnson's proposal on what to do at the border between the British province of Northern Ireland and the Republic of Ireland, which is an EU member. Ireland has said it will not sign off on a deal that does not safeguard an open Irish-British border.

Following the technical talks, the EU released a statement saying that many questions still remained unanswered.

"We will meet again on Monday to give the UK another opportunity to present its proposals in detail," the statement said.

However, according to the statement the 27 EU member states "agreed that the UK proposals do not provide a basis for concluding an agreement."

Time is running out to agree a draft deal before Johnson and EU leaders meet for a summit in Brussels from October 17-18.