UK Prime Minister Boris Johnson has denied that he lied to Queen Elizabeth II over his reasons for proroguing Parliament. The five-week suspension was ruled unlawful by a Scottish court. 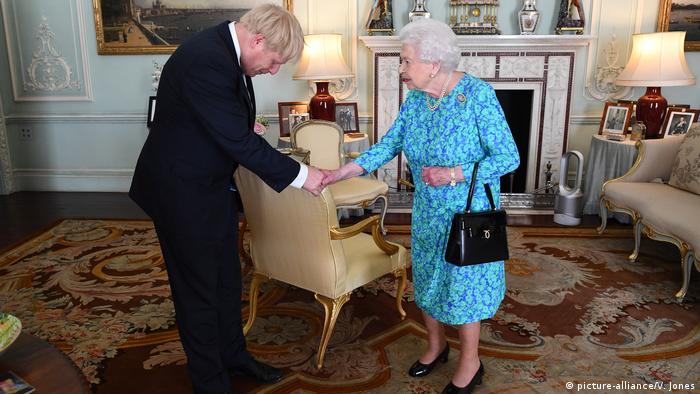 UK Prime Minister Boris Johnson has denied lying to Queen Elizabeth II regarding the advice he gave over the suspension of Parliament.

The prime minister was speaking on Thursday after Scotland's highest civil court ruled that the five-week prorogation, which Johnson initiated on Monday, was unlawful.

Johnson said he suspended Parliament in order to present his program of improvements to health care, policing and other "people's priorities" in a new parliamentary session.

Keir Starmer, Brexit spokesman for the main opposition Labour Party, said Wednesday that "no one in their right mind believed Boris Johnson's reasons for shutting down Parliament."

Parliamentary sessions normally last one year in the UK, but the current one has run nonstop since 2017 amid concerns over Brexit legislation.

Johnson is under increasing pressure from lawmakers and the public to recall Parliament. Some MPs have staged a sit-in at the House of Commons, claiming that Johnson's suspension was proven "unlawful" by the Scottish court.

Johnson flatly rejected calls to recall Parliament Thursday, reiterating that he was "working very hard" to strike a new deal with the European Union before October 31. If no deal is reached, he said he remained confident the UK would be adequately prepared for a no-deal Brexit.

But there is serious doubt about the veracity of such claims in Brussels.

"The UK has not proposed any alternatives, anything that is legally credible and workable. Unfortunately, the signals we are getting aren't indicating that there is any initiative that could reopen the negotiations," said European Parliament President David Sassoli after meeting with the EU's chief Brexit negotiator, Michel Barnier.

Sassoli's comments came one day after the forced publication of "Operation Yellowhammer" documents, the government file which prepared for the "worst-case scenario" of a no-deal Brexit and listed such potential problems as protests on the streets and traffic jams at the borders.

Johnson described this document as "just the sensible preparations that you'd expect any government to do."

Meanwhile, a court in Northern Ireland ruled on Thursday that a separate case relating to Brexit was unlawful. The case argued that an exit from the EU would have a detrimental effect on the Good Friday Agreement establishing peace between Northern Ireland and the Republic of Ireland.

At least one of the three claimants plans to appeal the ruling, meaning this case will be heard by the Supreme Court next week along with the Scottish court ruling.

The fate of the border between Northern Ireland, a part of the UK, and the Republic of Ireland, a member of the EU, remains one of the most controversial aspects of any Brexit agreement. Irish Foreign Minister Simon Coveney said Thursday that the EU is still in talks about "minimal checks possible" after a no-deal Brexit.

"We will respond positively if there are suggestions and new approaches that are based on realism in terms of what will actually work," Coveney said. "Let's wait and see what the British government brings forward."

British daily newspaper The Times had reported that the DUP were prepared to make concessions by accepting certain EU rules. However, Foster wrote on Twitter that "anonymous sources lead to nonsense stories."

She was also keen to stress that the UK must leave on a united front, as one nation.