Scotland's highest court of appeal ruled that British PM Boris Johnson's decision to prorogue Parliament was unlawful. But the court did not call for the suspension to be repealed. 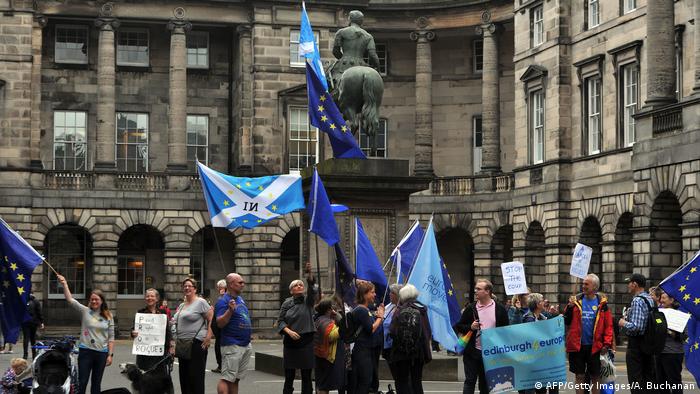 The move by British Prime Minister Boris Johnson to prorogue the UK Parliament was declared "unlawful" on Wednesday by Scotland's highest court of appeal.

The decision "had the purpose of stymying parliament," a summary of the judgment said.

A UK government spokesman described the court decision as "disappointing" and said that they will appeal to the Supreme Court. "The UK government needs to bring forward a strong domestic legislative agenda. Proroguing parliament is the legal and necessary way of delivering this."

"Huge thanks to all our supporters & our fantastic legal team who have achieved the historic ruling that #prorogation is #unlawful," Scottish National Party lawmaker Joanna Cherry said on Twitter.

"We are calling for Parliament to be recalled immediately," Cherry told Sky News after the verdict by Scotland's Inner Court of Session.

Jo Maugham, a lawyer involved in the case, said an appeal to the Supreme Court, the highest judicial body in the United Kingdom, would begin on Tuesday.

"We believe that the effect of the decision is that parliament is no longer prorogued," he said following the court's decision. "I have never been able to contemplate the possibility that the law could be that our sovereign parliament might be treated as an inconvenience by the prime minister."

However, as the court gave no order for the suspension to be lifted, parliament remains prorogued for the time being.

Parliament was suspended on Monday until October 14 in a move that many see as an attempt to prevent lawmakers from acting against Johnson's plans to leave the European Union without a Brexit agreement.

Last week a court in Edinburgh rejected the initial challenge, but this was overturned on Wednesday following an appeal. A separate legal challenge brought to the High Court in London failed last week.

No. 10 insiders have allegedly questioned the political motivation of the ruling as it comes from a Scottish court. A spokesman for Johnson has responded by saying that the government has 'absolute respect for the independence of the judicary.'

This comes on the same day that tensions are rising as parties face the possibility of a general election. Tom Watson, deputy leader of the Labour party, said on Wednesday that the result of the 2016 Brexit referendum was no longer valid and called on his party to "unambiguously back remain."

Meanwhile, Brexit party leader Nigel Farage again on Wednesday called for Johnson to seek a "clean break" Brexit. He has offered to support Johnson's Conservative party in any upcoming election. "If we stand against them, they cannot win a majority," he said.

A Kantar poll published on Wednesday morning showed that the Conservatives retained a large lead over other parties, but still saw their support down by four percentage points. They led with 38%, with Labour on 24%, the Liberal Democrats on 20% and Farage's Brexit party on 7%.

Just over half of responders also support a final Brexit deal, should there be one, being put to another referendum.

German Chancellor Angela Merkel said on Wednesday that she was "prepared for a disorderly Brexit."

Labour leader Jeremy Corbyn led talks with UK opposition parties on Friday, resolving not to back Boris Johnson's second move for a general election. The prime minister is planning a vote in Parliament on Monday. (06.09.2019)

Ahead of his state visit to the UK, US President Donald Trump said London should "walk away" from Brexit talks if Brussels doesn't bow to the UK's demands. He also stressed that Nigel Farage would make a good negotiator. (02.06.2019)