Pro-Russian activists in eastern Ukraine are demanding federalization. Moscow argues the move would unite Ukraine. The government in Kyiv fears the opposite would be the case. 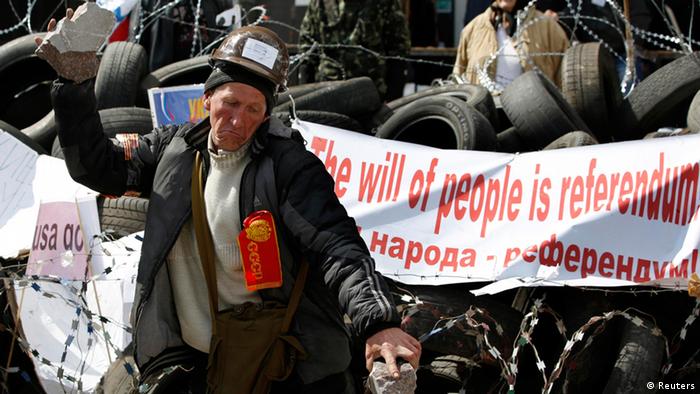 Russian media and politicians call them "supporters of federalization." Their Ukrainian counterparts have branded the thousands of activists who have occupied regional administration offices and police headquarters in eastern Ukraine since April as "separatists."

Many are armed. They demand a referendum on Ukrainian federalization that would give Russian-speaking regions in eastern Ukraine greater authority. Russia is also in favor of federalizing Ukraine; otherwise, there will be no stability in the country, the Russian Foreign Ministry warns.

The demands include fundamental constitutional reforms, the likes of which Ukraine hasn't seen in recent history. Article 2 of the document defines Ukraine as a centralized state. The former Soviet state is subdivided into 24 regions, the oblasts, and the Autonomous Republic of Crimea, which has in the meantime been annexed by Russia. The capital Kyiv is the center of power, and the president, the government and parliament decide on everything from taxes to language policies. 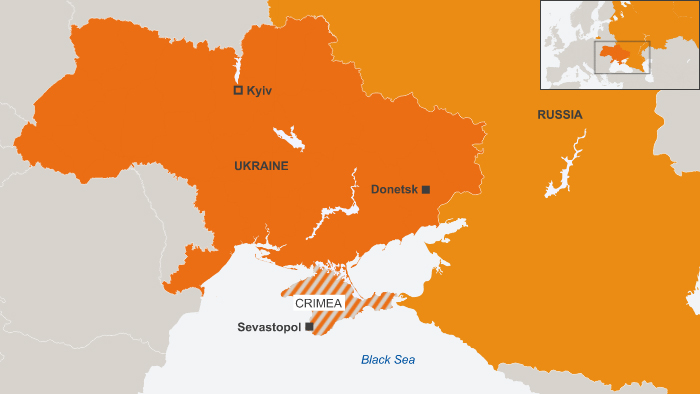 The unrest is predominantly occuring in Russian-speaking eastern Ukraine

That is precisely what the armed activists aim to change. The demands are not new, but these past years, no one took them seriously. In late January, when violence began to overshadow the opposition's peaceful protests, the ruling Party of Regions brought up the idea of a federal Ukraine once again. The country is on the brink of a civil war, Ukraine's online newspaper Ukrainska Pravda quoted Vadim Kolesnichenko as saying. Russian-speaking Ukrainians in the east and south of the country viewed the protests on Kyiv's Maidan as a danger to their ethnic group, the lawmaker said. Federalization would help prevent the country from falling apart, Kolesnichenko said.

"Federalization is the only medicine against Ukraine's breaking apart, there's no alternative," Viktor Medvedchuk wrote in a blog as early as summer 2012. The once influential Ukrainian politician repeated his demands during the 2014 protests.

Medvedchuk is the leader of Ukrainian Choice, a pro-Russian faction that opposes integrating Ukraine into the European Union. So far, the movement has had little influence on Ukrainian politics, at least officially. However, Medvedchuk is a friend of Russian President Vladimir Putin, and Ukrainian media report he is currently visiting Russia. 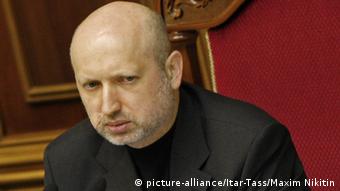 Turchynov has not ruled out a redistribution of powers

Only parliament can decide on federalizing Ukraine. 300 out of 450 deputies would have to vote in favor of a change to the constitution. But the government in Kyiv has made it clear it opposes federalization, and acting President Olexander Turchynov has rejected all demands from Moscow. Many politicians in Kyiv fear that federalization would split off southern and eastern Ukraine.

The government is prepared, however, to grant the provinces more authority. Turchynov has not ruled out the possibility of a nationwide referendum on the future distribution of power. Opinion polls show that there is no majority in favor of federalization, but many people in eastern Ukraine want greater authority for the regions.

The people in the streets of Kyiv are skeptical. "A Ukrainian federation isn't a bad idea, as long as it's democratic like in Germany," a passersby on the Maidan, Kyiv's Independence Square, says, adding he's not in favor of a Russian-style federation. "Russia is a federation on paper only - the Kremlin has the real power." The man also fears federalization would lead to the country's collapse.

Another citizen is even more strongly opposed to federalization. "We're not a multi-ethnic state like Russia," he points out. "All of us are Ukrainians, in the east and in the west."

The Donbas is Ukraine's industrial heartland. But its coal-based economy is a heavily-subsidized millstone for Ukraine, not a powerhouse, no matter how important its arms exports might be to the Russian military. (15.04.2014)