′Russia has organized the events in Ukraine′ | World | Breaking news and perspectives from around the globe | DW | 14.04.2014

The unrest in eastern Ukraine is being orchestrated by Russia, says political scientist Andreas Umland, in order to make the country unstable and disrupt the presidential election. 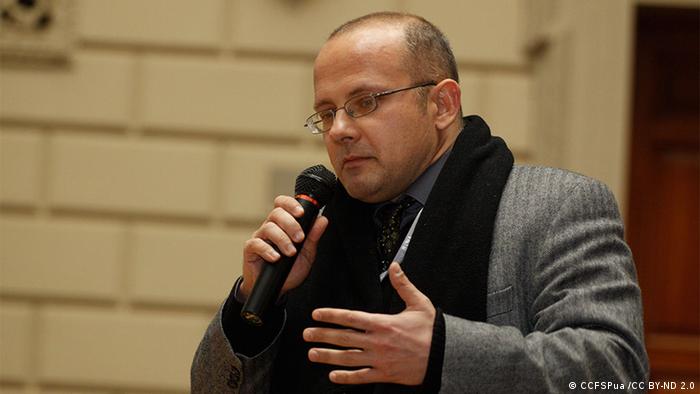 Deutsche Welle: Who do you think is responsible for the bloody battles in Eastern Ukraine, especially in Slovyansk?

Andreas Umland: All signs point to the actions having been organized by Russia. We have video footage from various cities in eastern Ukraine where heavily armed and uniformed men are playing a key role in the occupation of government buildings.

There seems to be a sort of alliance - on the one hand, we suspect these special units came from Russia, on the other hand, local separatists or even young local men are paid to partake in this.

And now it's being argued what Putin's goal is. Is he all about making Ukraine unstable? Or is he doing it to provoke an escalation that results in military intervention?

In your opinion, what does Putin want to achieve?

I suspect it's about making Ukraine unstable. If successful, it could prevent the presidential elections from happening on May 25. Russia's tactic over the past few weeks has been to say that the government in Kyiv is illegitimate. The vote could confirm this legitimacy, and Russia wants to boycott it.

In addition, Putin probably wants to prevent the formation of a government model different to his. The main motivation behind this whole action is probably that Ukraine should not develop into a European, democratic, stable and economically successful state, because that would bring [Putin's] own Russian model into question. The Russians would then look at Ukraine with envy and draw their own conclusions for their own country.

Back to those fighting in Ukraine. How many of them are there? And in what way are they representative?

In the smaller cities there seems to be dozens, if not hundreds and in the larger cities, a few thousand. But, when you look at that in proportion to the population of each city, then really, it's only a fraction of the people.

There are by no means large demonstrations like we had during the Euromaidan, where hundreds and thousands of people alone were on the streets of Kyiv. This shows that this is not a grassroots movement.

There are of course about 10 to 20 percent of the population [in eastern Ukraine] who are separatists - often they are the ethnic Russians, but also Russian-speaking Ukrainians. But that does not represent the majority of the population.

Surveys indicate that between 60 and 70 percent want a Ukrainian state. This division has been there for the past 20 years - ever since the existence of an independent Ukraine - though it has never led to so much unrest.

To what extent is eastern Ukraine dependent on Russia?

That's the main problem: eastern Ukraine is a heavily industrialized region, and its output largely goes to Russia. There is fear now that Russia will close this market. That would be a problem, because the products are made specifically for the Russian market and are not easily sold to other countries.

The tactic apparently was that the special forces, who appear to have come from Russia, first attacked police stations and then distributed police weapons to the separatists. They are now armed with firearms, but not heavily - that means if the Ukrainian government wanted to stop them, they could.

The problem is, it would probably be a bloodbath - which they want to avoid. This could cause an escalation that would be very difficult to control - either in Kyiv or Moscow. The present Ukrainian government is in a quandary, which is often understated by the media.

What is the strategy behind Interim President Oleksander Turchinov's statement about holding a referendum at the same time as the presidential election?

The motivation is not so much that there will be a referendum, but that a referendum would ensure that the presidential election takes place. People would come to the polls for the referendum and simultaneously vote for the president.

In addition to that, all surveys say that separatism in eastern Ukraine is much weaker than in Crimea. That's why a referendum in favor of Ukraine must happen.

Andreas Umland is currently on exchange as a lecturer for the German Academic Exchange Service (DAAD) with the Kyiv-Mohyla Academy. He is the editor of "Forum for the Ideas and Contemporary History of Eastern Europe."

' A clear signal to Russia from the Council of Europe'

There has been a great deal of concern that what has happened in Crimea could repeat itself in eastern Ukraine. But experts maintain that there are few similarities between the two regions. (09.04.2014)