Putin to uphold loans to Ukraine despite turmoil

Russia's President Vladimir Putin has pledged to honor loan commitments made to Ukraine in December, regardless of which government is in charge. He also said Ukraine had to overcome its political upheaval independently. 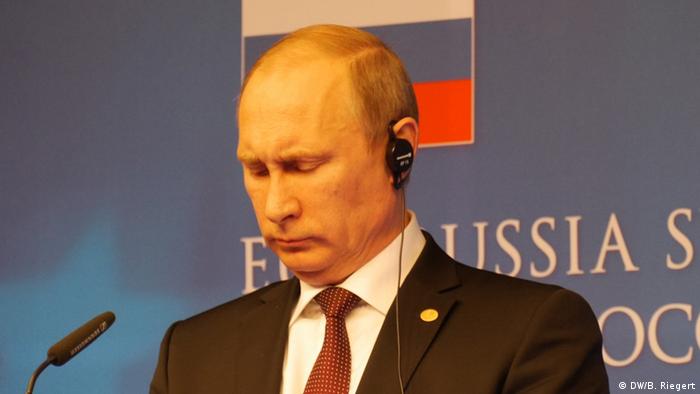 Putin's loan reaffirmation, made at a meeting in Brussels with EU leaders, followed news on Tuesday that Ukraine's Prime Minister Mikola Azarov had resigned as opposition protests continued in Kyiv.

Putin said Russia would stick to its promises to assist Ukraine, adding that this would not hinge on who was in charge of the country.

He also expressed confidence Ukraine would find a solution to the political upheaval without outside intervention.

In December, Russia pledged a loan of $15 billion (10.98 billion euros) and lower gas prices for Ukraine after Putin's Ukrainian counterpart Viktor Yanukovych shelved talks with the European Union over an association agreement that would have represented a major step towards joining the bloc.

That move sparked clashes between demonstrators and police and the establishment of a protestor camp in the Maidan, or Independence Square, in the Ukrainian capital of Kyiv.

In another move Tuesday, parliament repealed draconian anti-protest laws which were introduced on January 16 as clashes heightened. Parliament on Tuesday voted 361-2 during an extraordinary session.

"Regarding you question whether we will review our agreements on loans and the energy sector if the opposition will take power ... No, we will not," Putin told a news conference after talks with European leaders in Brussels, which also covered Russia's hosting of the 2014 Winter Olympics and ended with affirmations to forge closer ties between all parties.

Putin said the loan was to "support the people of Ukraine, not the government. It's the people, the common people that suffer."

Putin also said Russia would not increase its involvement in Ukraine past the loan: "I think that the more intermediaries there are the more problems there are," he said.

"At the very least Russia will never interfere ... I think that the Ukrainian people are capable of solving this on their own."

Putin outlined his stance in Brussels after European Union President Herman van Rompuy and European Commission counterpart Jose Manuel Barroso spoke out on the political upheaval rocking Ukraine. Von Rompuy said the EU "strongly condemn the violence in Ukraine and call for restraint … freedom of assembly and expression must be preserved."

Earlier, the resignation of Azarov had been welcomed by Germany's Foreign Minister Frank-Walter Steinmeier, who hailed it was a potential "first step in the search for a political compromise."

Opposition leader Arseniy Yatsenyuk had been offered the post of prime minister by Yanukovych on Saturday but turned it down. He and fellow opposition leaders Vitali Klitschko and Oleg Tyagnybok were among those present at Tuesday's session.