Ukraine has said it is suspending preparations to sign a landmark trade and political pact with the European Union. It comes after parliament rejected legislation to free jailed ex-prime minister Yulia Tymoshenko. 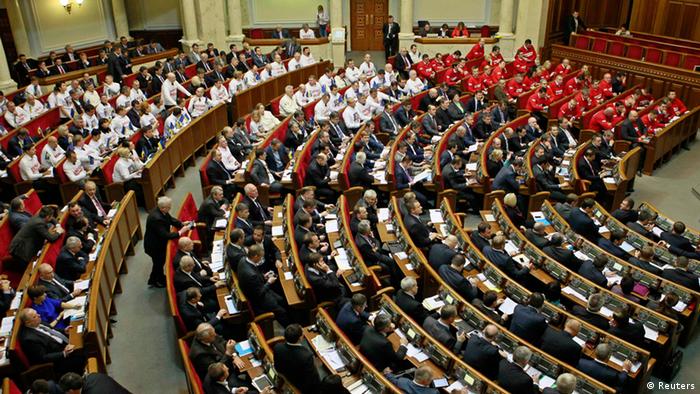 Ukrainian Prime Minister Mykola Azarov issued a decree on Thursday announcing the "halt of the process of preparing" the pact, which would have seen Ukraine shift closer to the West and away from historic ally Russia.

The Association Agreement was considered an important step towards Ukraine's eventual membership in the 28-member bloc.

The diplomatic turnaround came after months of protracted negotiations over terms and just eight days before both sides were expected to sign the agreement at a summit in Vilnius.

The decree said the suspension of the deal was designed to "ensure the national security of Ukraine" after taking into account possible risks the deal could pose to trade with Moscow. The former Soviet Republic has been concerned that a punitive response from Russia could hurt its economy following threats of trade repercussions from President Vladimir Putin.

Ukraine said it would now seek to "renew active dialogue" with Russia, other members of a Moscow-led customs union and the Commonwealth of Independent States, a grouping of former republics of the Soviet Union.

The leader of the opposition reacted with anger over the move, warning that President Viktor Yanukovych could face impeachment if he failed to sign the deal.

"If Yanukovych is refusing to sign the agreement, then it is not only state treason but also grounds for the impeachment of the president and the dismissal of the government," top opposition leader Arseniy Yatsenyuk said in parliament.

He said the opposition was requesting that Prime Minister Azarov explain the "illegal and unconstitutional" decision in parliament on Friday.

Meanwhile German Foreign Minister Guido Westerwelle issued a statement saying the European Union was still willing to consider a deal with Ukraine, but Kiev had the right to decide its own path.

The announcement came hours after lawmakers again failed to approve legislation that would have allowed former prime minister Yulia Tymoshenko to travel to Germany for medical treatment.

It had been one of several EU conditions for the signing of the deal.

Parliament voted down all six bills put forward on the treatment of convicts abroad, prompting chants of "Shame! Shame!" from opposition lawmakers.

Tymoshenko was jailed for seven years in 2011 for abuse of power. Her incarceration has been condemned as politically motivated by Amnesty International and several European leaders.