A DW survey shows that Ukrainians want a planned EU association agreement, as well as a customs agreement with Russia. But support for the EU deal has receded. 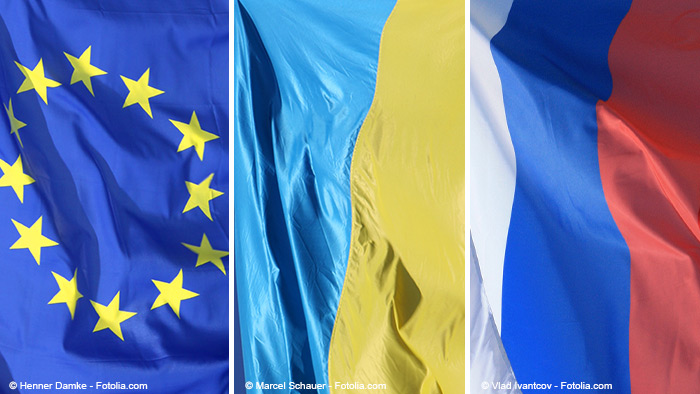 Ukrainian support for an EU association agreement, which could be finalized in November in Vilnius, Lithuania, has decreased compared to figures from July 2013. Still, half of Ukraine's population (50 percent) is in favor of the association and free trade agreement between Ukraine and the EU. However, one in three Ukrainians rejects signing the treaty.

These are the results of the current DW-Trends for Ukraine. The representative survey was conducted by the Office of the Ukrainian research institute, IFAK, in October 2013 on behalf of DW'S Ukrainian language department. One thousand people, between the ages of 18 and 65 years, were interviewed in Ukrainian cities with more than 50,000 people. 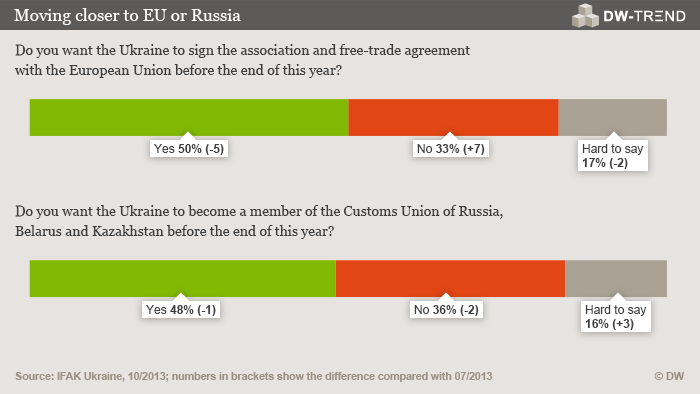 Public opinion is also divided when it comes to Ukraine's possible accession to the Customs Union of Russia, Kazakhstan and Belarus that Moscow intends to mold into a Eurasian Union. Forty-eight percent of participants were in favor of Ukraine becoming a member of the Customs Union of the former Soviet Republics. Thirty-six percent are against it. These results don't differ much from the July poll. EU association is still largely supported in Ukraine's west and center (64 percent), while Ukrainians in favor of the Customs Union mainly live in the country's east and south (59 percent).

Compared to the survey three months ago, a greater number of Ukrainians believe President Victor Yanukovych is serious about the country's EU association. Forty percent believe the Ukrainian president is set to do everything in his power to get the treaty signed by the end of this year. That's a plus of nine percent compared to figures from July. Back then, 50 percent were in doubt about that. For the poll in October, it's a mere 35 percent. 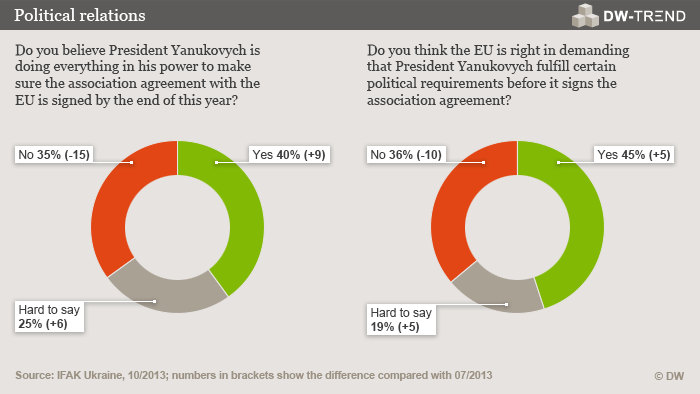 Forty-five percent of Ukrainians say it is right that the EU has demanded Yanukovych to fulfil political requests as a prerequisite for an EU association agreement. The EU has demanded reforms to strengthen Ukraine's democracy and rule of law. Thirty-six percent of participants reject such demands.

Ukraine's economy would benefit the most from an EU association agreement, say the poll's participants. Thirty-two percent hope it would open up new markets for Ukrainian goods. Thirty-one percent believe closer ties with the EU will push for a more modern local economy. Improving Ukraine's democracy and rule of law is ranked fourth on the list (23 percent). 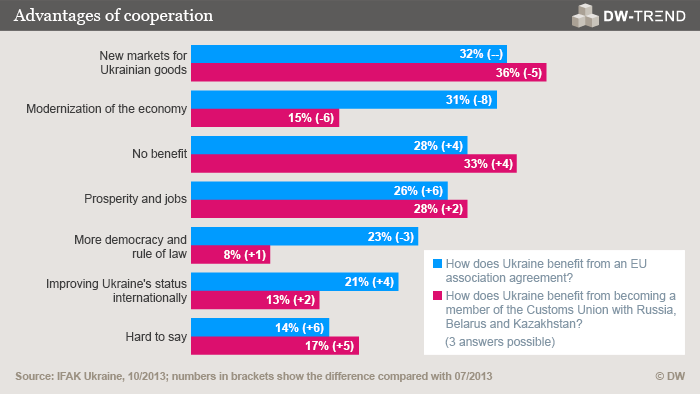 Ukraine's possible membership with the Customs Union of Russia, Kazakhstan and Belarus is linked with economic benefits, as well. Thirty-six percent hope for new markets for Ukrainian goods. What's striking is that a mere 15 percent of participants believe the Customs Union would help modernize the country's economy. Just eight percent expect improvements in terms of democracy and rule of law.

One in three Ukrainians doesn't expect anything to come out of a Customs Union (33 percent) nor an EU association (28 percent). Such a high number could point to a great deal of skepticism for potential partners.

The Ukrainian government has approved an association agreement with the EU, which means that a customs union with Russia is now off the table. But the EU deal is far from cut and dried. (18.09.2013)

Trade dispute warns Ukraine of cozying up to EU

The media describe it as a "trade war" while the governments in Moscow and Kyiv try to downplay the issue. Observers say Russia's halt of Ukrainian imports was to pressure the country into abandoning its EU aspirations. (21.08.2013)

A majority of Ukrainians are in favor of their country joining the EU. The planned association agreement with Brussels is creating expectations beyond the economic benefits, according to the latest DW-Trend. (03.07.2013)