Further protests have unfolded across Ukraine after the opposition shunned government concessions. Clashes were reported in Kyiv, while blockades have been set up outside administrative buildings in over a dozen cities. 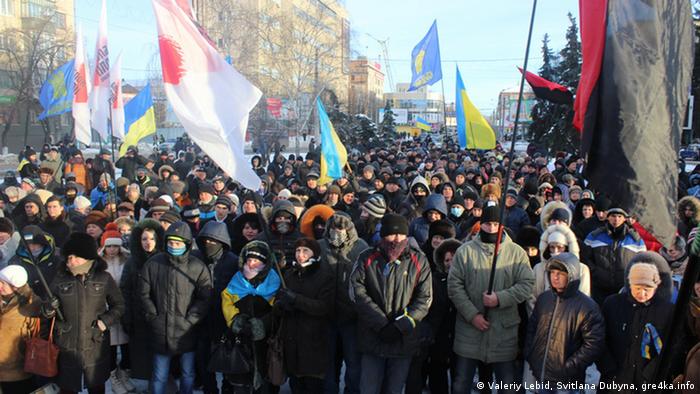 Thousands of Ukrainians took to the streets on Sunday to mourn the death of a protester shot dead during clashes earlier this week.

Mourners chanted "Hero!" and sang the national anthem, as the coffin of 25-year-old Mikhail Zhiznevsky was carried through the streets.

Zhiznevsky, a student from Belarus, was one of three people shot dead when protests turned fatal for the first time on Wednesday. Sunday would have been his 26th birthday.

The government of President Viktor Yanukovych confirmed he died of gunshot wounds, but has denied that security forces were responsible. It contends that Zhiznevsky and another activist were killed with hunting rifles, saying police did not carry such firearms. It has not commented on how the third protester died.

Over the last week, anti-government protests in Kyiv have turned increasingly violent, with daily clashes breaking out between protesters and police amid barricades.

Late on Saturday protesters, throwing fireworks, firebombs and rocks, took control of a cultural center near the capital's protest zone, Independence Square, where roughly 200 police officers had been sheltering.

Police, besieged in the building, responded with stun grenades and sprayed water into the crowd.

They were permitted to leave through a corridor created by the crowd early Sunday to cries of "Shame!" from protesters, after opposition leader Vitali Klitschko arrived at the scene and helped to negotiate a solution.

The Interior Ministry said two officers had been hospitalized following the siege and essentially accused protesters of attempting to take the troops hostage.

Later, protesters also seized the Justice Ministry, prompting Justice Minister Olena Lukash to warn that she could call for a state of emergency.

The latest violence broke out hours after opposition leaders issued a defiant response to an offer of government posts from Yanukovych. The president offered Arseniy Yatsenyuk, one the opposition's top figures, the prime minister's post and Klitschko the deputy prime minister's role.

"This was a poisoned offer from Yanukovych, designed to divide our demonstrators' movement," Klitschko told German Sunday paper Bild am Sonntag. "We will continue to negotiate and are still demanding early elections."

Ukraine's next presidential election is scheduled for 2015, but Klitschko told protesters at Kyiv's Independence Square, or Maidan, that his UDAR (Punch) party wanted it to be held this year.

While not rejecting the offer outright, Yatsenyuk told protesters in the capital that the opposition would accept nothing less than the president's resignation.

"Tuesday is judgment day," Yatsenyuk told the crowds, referring to the next extraordinary session of Ukraine's parliament, when the new ministerial appointments could be made. "We do not believe any of their words, we believe in action."

Yatsenyuk also said his party was "ready to take the country into the European Union," one of the major reasons for two months of protests in the capital, and a week of more intense violence between police and demonstrators.

The protests began in November when Yanukovych surprisingly shelved a planned Association Agreement with the EU - one of the steps en route to joining the bloc - in favor of closer ties with Moscow.

While the protest movement is largely focused on Kyiv's Independence Square, unrest has spilled into other regions of Ukraine in recent days.

Protesters have blockaded local government offices in four cities and have occupied official buildings in nine more. Although many of them are in western Ukraine, where the anti-Yanukovych movement is at its strongest, there have also been occupations in central regions of the country.

Several world leaders have appealed for calm as the country faces its worst violence since it won independence following the Soviet Union's collapse in 1991.

On Sunday Germany's foreign minister urged Ukrainians to refrain from violence and reach a political solution to the crisis.

"The daily television images from Kiev and many Ukrainian regions show that the situation is not only tense but truly serious," Frank-Walter Steinmeier said in a statement.

"The coming days could decide Ukraine's path into the future."

Steinmeier warned that "Ukraine's path into a self-determined future is surely not the path of violence, from whichever side it comes," he added.

"I am convinced, even if the situation is this difficult, that a political solution remains possible and must be sought."