Klitschko: Situation ′could spin out of control′ | World | Breaking news and perspectives from around the globe | DW | 25.01.2014

Klitschko: Situation 'could spin out of control'

Vitali Klitschko, one of the key leaders of the Ukrainian opposition movement, tells DW that violence may continue to escalate in Kyiv. He says it's up to the president to take action to end the conflict peacefully. 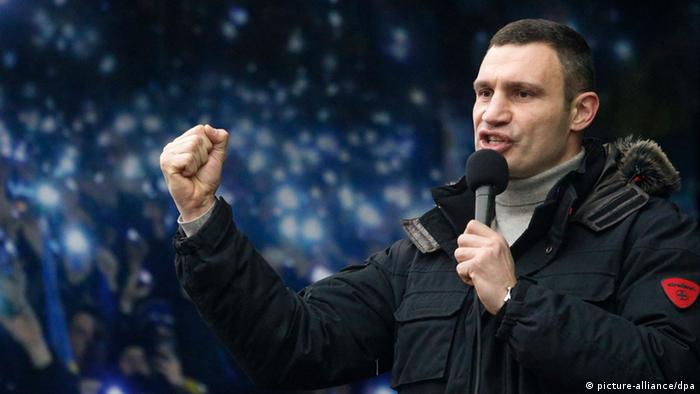 DW: How can further violence be stopped?

Vitali Klitschko: I will do everything I can to stop the bloodshed. But the people are not happy with the results of negotiations that we opposition leaders had with President Viktor Yanukovych on Thursday (23.01.2014). They expected more. Unfortunately, Yanukovych is showing no desire to compromise with the people. A month ago the resignation of Interior Minister Vitali Zakharchenko might have been enough. A few weeks ago the resignation of the government might have been enough. Now the people want Yanukovych to step down.

On Hrushevsky Street, one of the most dangerous centers of the conflict, I appealed to people for a period of calm. They listened to me and I am thankful to them for that. It was a gesture of goodwill and readiness to cooperate. But when we returned from the negotiation and I explained the results to them, I heard whistles of discontent. They were not directed at me but at the authorities and their refusal to engage in finding a solution to the conflict.

How can Europe help?

Europe has major leverage over Yanukovych and the people around him who keep their money in the European Union. We very much hope that our combined efforts will solve the growing conflict. It's already getting out of control, but there is still an opportunity to solve it peacefully without using the security forces. We have to take advantage of every opportunity. I told Yanukovych during the negotiations that this is his personal responsibility. His suggestions are not enough to get people to leave the streets and go home. He did not respond and we can see how the situation is escalating.

For weeks you have called on the West to enact sanctions against the Ukrainian leadership. So far the EU has refused. Are you disappointed?

I have made appeals to many politicians and will continue to do so. I talk to statesmen from other countries. We need help, pressure, contacts: anything to convince Yanukovych that the solution to this conflict is in his hands. At the same time, I fear that the situation will keep escalating until one day, it spins completely out of control.

The opposition in Kyiv has good reason to fear state-sponsored terrorism, and the animosity between Ukraine's government and protesters could divide a country that is already politically torn, says DW's Bernd Johann. (24.01.2014)

Ukraine remains on edge - and with it, Germany and the EU. Both are sending strong signals to Kyiv as well as Moscow that the fighting should cease immediately. But beyond words, what can actually be done? (24.01.2014)

In Kyiv, tense calm pervades. Just before talks between the government and opposition, President Yanukovych has invited parliament to address the current crisis. Meanwhile, police are rearming. (24.01.2014)

Ukrainian protests spread to other cities