Putin and Poroshenko to meet at Minsk summit

The EU, Russia and Ukraine have confirmed a multilateral summit, to be held in Belarus one week from now. Russian President Vladimir Putin and his Ukrainian counterpart Petro Poroshenko will be among the participants. 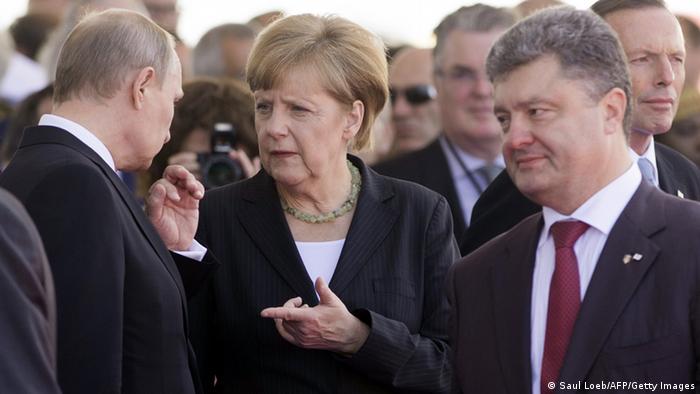 Officials in Kyiv, Moscow and Brussels on Tuesday confirmed a top-level summit in Minsk on August 26, where Vladimir Putin and Petro Poroshenko will again meet following their brief talks during the D-Day anniversary celebrations in June. Members of the Eurasian Customs Union - Russia, Belarus and Kazakhstan - will be joined by a Ukrainian delegation and senior EU officials.

Putin's spokesman, Dmitry Peskov, said that the leaders "will discuss the relations between Ukraine and the Customs Union and there will be a number of bilateral meetings."

Ukraine's Poroshenko, elected earlier this year, said "stabilizing the situation" in eastern Ukraine would be a key topic of discussion. Ukraine's military and pro-Russian separatists have fought for control of the regions of Luhansk and Donetsk since April.

On Tuesday, the Ukrainian military said that separatists had attacked a convoy of buses and cars carrying refugees displaced by the fighting - a charge the separatists rejected. European Commission President Jose Manuel Barroso called for the alleged incident to be investigated, after a phone call with Poroshenko.

The Eurasian Customs Union is a three-country trade bloc scheduled to be turned into a free-trade zone called the Eurasian Economic Union by 2015. Former Ukrainian President Viktor Yanukovych's decision last November to break off integration talks with the EU and instead seek membership of this trade zone helped prompt the mass-protests in Kyiv that ultimately led to a change in Ukrainian government and the current tensions with Russia.

Russia says no progress on Ukraine truce at talks

Russian Foreign Minister Sergei Lavrov has said Berlin talks on a truce in Ukraine failed to make any progress. But he said all issues relating to a Russian aid convoy for Ukraine had been resolved. (18.08.2014)